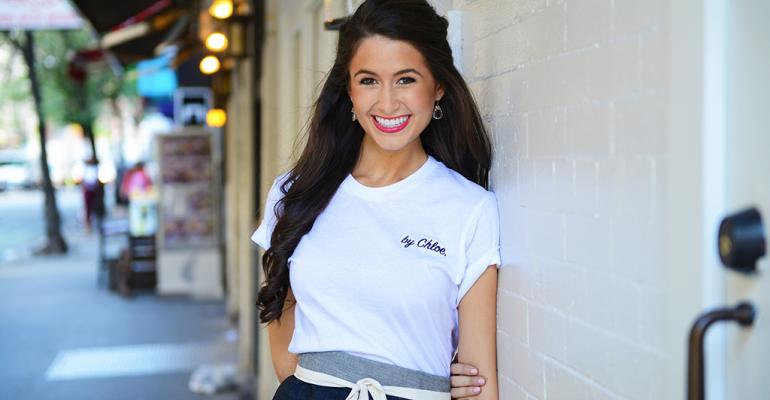 The founder of the vegan By Chloe chain filed a lawsuit Monday charging current parent company ESquared Hospitality LLC with trademark infringement and other state and federal civil code violations.

The lawsuit in U.S. District Court for the Central District of California stems from By Chloe founder Chloe Coscarelli’s expulsion last year as a partner in BC Hospitality Group LLC, which is controlled by ESquared Hospitality and now operates the 10-unit fast-casual chain, based in New York.

In the complaint, Coscarelli said her exit was in part motived by her rejection of advances by ESquared Hospitality CEO James Haber, who she said had become infatuated with her and began “a jealous and threatening campaign aimed at trying to control Chloe and acquire the personal rights to her brand.”

After months of “spurning Haber’s advances” and refusing his proposals to license her name to mass produce food for retail sale, or allowing her name to be sold to international buyers, Haber became furious and began sending threatening messages to Coscarelli and her family, the complaint said.

He demanded that Coscarelli meet him alone “so he could share private feelings he said he had toward Chloe and about their relationship.”

The lawsuit, however, does not include charges of sexual harassment. The 14 counts include trademark violations, unfair competition, unjust enrichment, and other breaches of business and professional codes.

ESquared Hospitality did not immediately respond to requests for comment.

Since her exit, Coscarelli has contended that ESquared Hospitality cut costs and sacrificed quality, and the restaurants that bear her name are serving poor quality food, damaging her reputation, the complaint said.

One customer got sick after dining at a restaurant last November and reached out to her directly, believing she was still involved, and restaurants have been cited for food-safety violations, the lawsuit said.

Coscarelli also said she has not given BC Hospitality Group approval to use her name on a line of vegan products sold in retail stores, including Chill by Chloe frozen desserts and chewing gum.

Last week, By Chloe announced an unspecified investment by Bain Capital Double Impact that will allow the chain to double its number of units.

The first By Chloe restaurant opened in New York, in 2015. Coscarelli initially developed the restaurant with partner Samantha Wasser, who is Haber’s daughter.

ESquared Hospitality continues to operate BLT-branded restaurants as part of a licensing agreement, according to Eater.