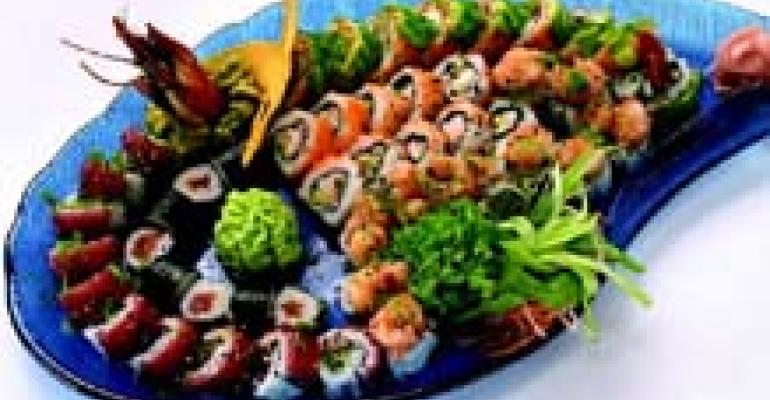 Restaurant interiors offer sensory input on a variety of levels, and draw on many influences. Consider the impact that feng shui, aromatherapy, or sound design can have on the dining experience. We seem to be saying to chefs today "Great food. What else can you bring to the table?"

So it's not surprising that when chefs and operators have a knowledge of theater, engineering, architecture or medicine, their experience gives them an edge in presenting something different to their patrons.

Novelist/poet Robert Louis Stevenson said "Wine is bottled poetry." Borrowing from that blend of arts, we can say today that fusion cuisine is edible harmony. Dessert is often described as architecture on a plate. And because the sciences and technology have had such impact on our lives, restaurants also practice menu engineering, and creative chemistry.

Chefs such as Ferran Adria of El Bulli in Spain blend art and science with ideas like flavored foam. It makes a statement on the plate and on the palate. And then there's micri, the sauce-thickening ingredient that can be used in making all those stylish foams. Micri was developed by chef Miguel Sanchez Romera who is also a practicing physician. [See "Dr. Foam Makes a House Call," RESTAURANT HOSPITALITY, November 2003.]

Philosophy of Fusion
At Tsunami in West Palm Beach, Fla., the restaurant draws on the Asian idea of a balance between yin and yang. This concept is expressed on the menu and on the tabletop, with the most prevalent interior design features being the restaurant's dramatic multi-level staircase and a large Buddha statue that overlooks the scene in the dining room.

Owner/partner Shamin Abas Cilione created dramatic tablesettings compatible with the Asian fusion cuisine. A performing arts school graduate, former professional dancer and assistant cruise director for Carnival Cruise Lines, she knows about the drama of presentation. Of the menu and tablesettings, she says, "Fusion can become confusion, but our flavors come out distinctively in each dish. We wanted a clean, modern design, and we use a different plate for each entrèe. Each menu item has its own dish¯and people love that." Stylish dinnerware from Fortessa includes eye-shaped, triangular and rectangular plates.

Menu specialties range from sushi to Pumpkin-Curry Chowder, and include Wok-Roasted Mussels with Oven-Dried Tomatoes, Sake, Cilantro, Lime and Toasted Naan Bread, as well as Tempura Atlantic Yellowtail Snapper with Thai Red Rice, Napa Cabbage and Star Anise Butter. Sushi and sashimi prices range from $3 to $22; appetizers are priced from $11-$22; and entrees-range from $24-$26. Most desserts are $6-$9; souffles are $12.

Inventive and Innovative
At moto in Chicago, chef Homaro Cantu has dining innovation down to a science. Along with the four years he spent at Charlie Trotter's, Cantu's cooking style was also influenced by his own father, a fabricating engineer for Lockheed Martin. With its everchanging Asian-influenced all-tasting menu, experimentation and food engineering are part of the dining experience at moto. Cantu currently has several "kitchen inventions" in the patent process. The 20-course gtm (gastronomic tasting menu) for $160 draws on what Cantu calls "food engineering." He uses magnetized dishware, a clear, pressure cooking box for cooking food tableside, and several custommade utensils.

Sample menu items include "Flat" Ware with Toro and Caviar that comes with curly-cue flatware handles filled with a sprig of thyme, and Fennel Phase One—Hot Gelled Fennel Hash, Candied Fennel with an Edible Wrapper, and a Fennel Slurpee® with a sipping straw, and Pacific Bass Baked Tableside in an individual pressure-cooking box.