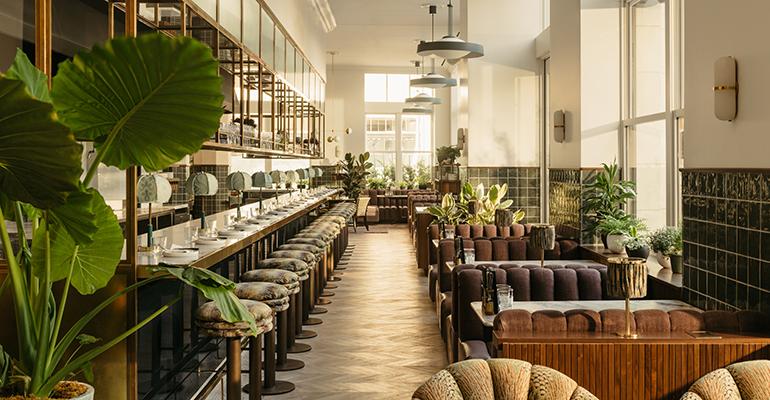 Authentic and engaging culinary experiences headline the menus of the newest crop of hotel restaurants, which are blending globally influenced offerings with Millennial demands for communal dining and interactive presentations.

“The world is getting smaller,” said Karim Lakhani, executive vice president of food and beverage/procurement at Denver-based Northwood Hospitality, which manages 10 hotels around the country. “People are traveling more, and visiting different cultures and different countries, and they want to experience those things in their own backyard.”

Restaurants in the Northwood Hospitality group are focused on creating dishes that reflect culinary experiences from around the world, often using locally sourced proteins and produce flavored with authentic spices and seasonings sourced by individual chefs. 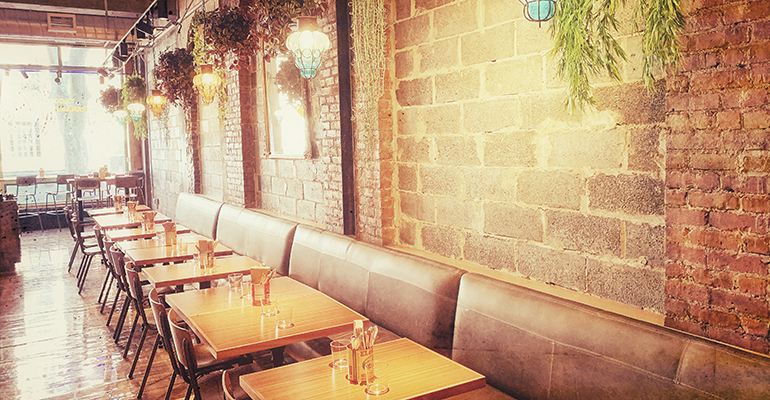 For example, the menu at at Gerrard Street Kitchen, a new restaurant at The Darcy Hotel in Washington, D.C., features dishes from Japan, Morocco, South Asia and India, as well as some traditional British offerings.

“Our creations elevate the authentic street-style foods of countries such as Japan, Korea and India,” said Jaime Velasquez, executive chef, in a statement. “We’re proud of our attention to detail and the research we’ve done while visiting these countries.”

Appetizers include Paratha Tacos and Thai Eggplant Jenga, for example, while signature entrées include Chicken Tajine, Beef Wellington and Robata Lamb Mishkaki. Enhancing the experience are several dishes that are finished tableside, such as the Bibimbap with Hamachi, served in a clay bowl that has been heated over an open flame so that it sizzles as the server combines the rice, egg, and Gochujang sauce in front of diners.

“Consumers are gravitating toward that type of experience,” said Lakhani.

An interest in communal dining, especially among younger consumers, is also evident at Gerrard Street Kitchen and other newly opened hotel dining destinations.

“We have noticed that hotel guests want something different from the normal dining experience, with two trends being shared plates and dinners where the chef is in the driver’s seat when it comes to the meal selections,” Russell LaCasce, executive chef at ZuZu, the newly revamped restaurant at Hotel Valley Ho in Scottdale, Ariz. “Guests want the opportunity to try everything, expand their palate, and enjoy a variety of options and flavors at the dinner table.” 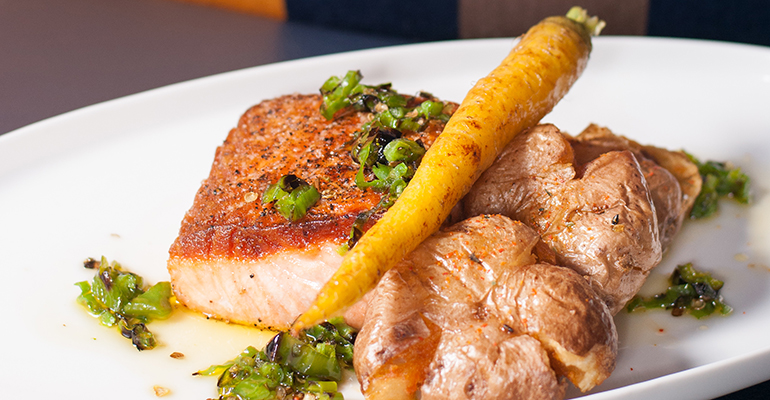 The restaurant has incorporated this dining style into its recent restaurant revamp with a focus on small plates as well as a “ZuZu, Take the Wheel” option, where the kitchen takes into account any allergies or dislikes and then surprises the table with a variety of dishes.

“Whether guests order their own small plates to share with the table or choose to let the kitchen take charge, they are guaranteed a bold dining experience full of myriad flavors,” aid LaCasce.

Hotel restaurant operators said the quality of hotel dining has been improving across the board.

“I think diners are seeking out more authentic experiences in general, and we’ve seen really amazing restaurants partnering with hotels,” Jack Bardy, co-owner of Cósmica and partner at the Wildlife Hospitality Group. “In our case, we wanted to provide not only authenticity, but a truly amazing experience, and I think we’ve done that with Cósmica.”

Bardy and his partners, Jennifer Epstein and Bill Keravuori, recently opened Cósmica in the The Revolution Hotel in Boston, featuring an “inventive take on Mexican street food” from Colton Coburn-Wood, executive chef.

Tacos such as Duck Carnitas and Pollo Chorizo Verde form the centerpiece of the menu, which also offers shared plates such as the Cochinita Pibil, a Yucatan dish prepared with braised pork and served in a banana leaf.

David Vialli, West Coast operations director for The Hoxton, a global network of boutique hotels, said the company has developed a foodservice offering that seeks to tap into guest preferences as well as the things its chefs, bartenders and staff “are super excited about.”

He cited low- and no-alcohol cocktails as an example, noting that a wide assortment of both are available at both Sibling Rival and Pilot at the company’s newest hotel, The Hoxton, downtown Los Angeles, as well as at its London location. 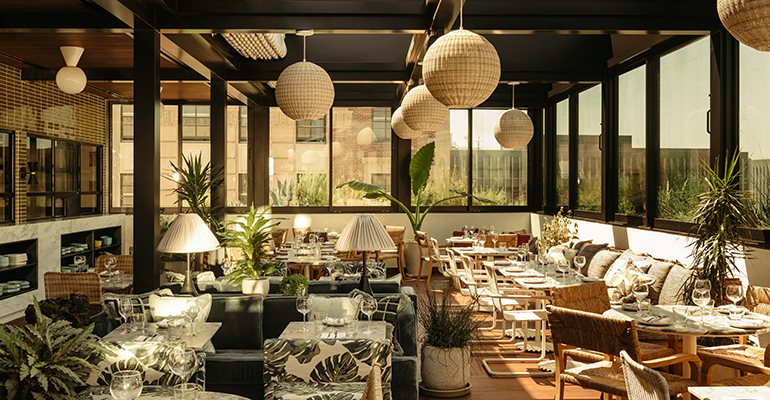 At the new Los Angeles location of The Hoxton, the company partnered with Sunday Hospitality, operator of New York’s Sunday in Brooklyn restaurant, for all of the bars and restaurants in the historic structure formerly known as the Los Angeles Railway Building. These include Sibling Rival, an all-day modern diner offering “innovative takes on classic American” fare, and Pilot, an open-air, rooftop venue centered around live-fire cooking, with locally sourced seafood and seasonal produce.

• Willow by Charlie Palmer at Mirbeau Inn & Spa Rhinebeck in Rhinebeck, N.Y., marking the world-renown chef’s first venture in New York’s scenic Hudson Valley region. Palmer is consulting on all food-and-beverage operations at the resort, including in-room dining, catering, the Aqua Terrace Venue for light fare, and both Willow and Willow Bar. Willow will be open for breakfast, lunch and dinner and will feature Palmer’s “progressive American” cuisine.

• RIME Seafood & Steak, the centerpiece of a new dining collection at The St. Regis Deer Valley in Park City, Utah, was developed in collaboration with Matthew Harris, chef/co-owner at the acclaimed Tupelo Park City. The menu at RIME will include sustainably sourced seafood and locally sourced meats, including wild game. Harris also collaborated with The St. Regis on three other dining concepts at the five-star resort: The St. Regis Bar & Lounge, offering contemporary American fare; Brasserie 7452, feature French comfort foods; and the Terrace Café, a casual, grab-and-go concept.