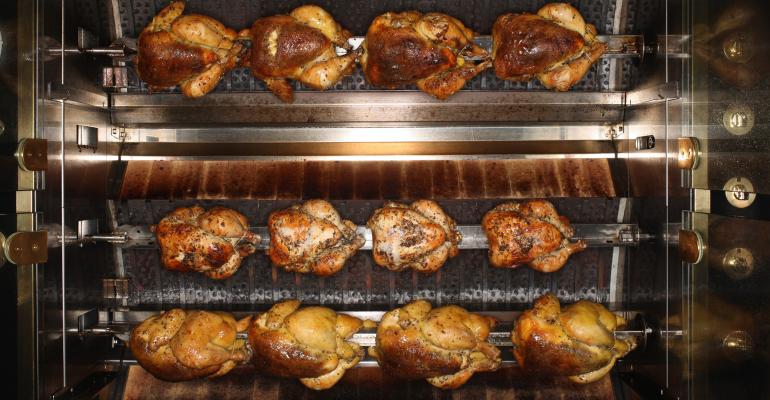 There’s not one way to roast a chicken

From buying to seasoning to cooking, chefs seek the perfect bird

Considering that people have been eating chickens for 8,000 years or more, you’d think that by now we’d have come to some agreement on the best way to cook them. But, even if you only look at classic roasted chicken, chefs take a variety of different approaches.

“Turning something over a spit is nothing new,” said Georgette Farkas, owner of Rotisserie Georgette in New York City. “This is the most traditional dish on the planet.”

The four-year-old restaurant offers beef, fish, lamb and pork cooked on spits, too, but about 65 percent of its customers order chicken, Farkas said. She charges $72 for a large “poule de luxe” bird, which comfortably serves two or three people, or $27 for half of a slightly smaller bird. They have wild mushroom stuffing between the breast and skin and slices of seared foie gras on top. She also offers a lunchtime “happy meal” of half a roasted chicken with a mixed green salad and fries for $29. Farkas purchases air-dried chickens which are then rubbed with compound butter containing salt and herbes de Provence and left to further air-chill for two more days before being roasted on a hot rotisserie — in excess of 600 degrees Fahrenheit, for 35 to 45 minutes.

He also brines the chicken beforehand for 20 minutes in a salty but simple solution of one gallon of cold water to one cup of Kosher salt.

“Sometimes people overthink it, and it doesn’t really taste like chicken anymore,” he said.

The brined chicken is rubbed with a mixture of garlic, rosemary, thyme, a neutral tasting oil and more salt, and is slowly turned in the rotisserie over the course of two hours at 250-300 degrees.

“You could put your hand in front of it for a good 10 seconds before it really starts to burn you,” he said. “Cooking at a high temperature, you get the skin super, super crispy upon order,” he said, but slow-roasting keeps them juicy. He and his team start cooking the chickens two hours before service. Then they let them sit for 10 to 12 minutes before cuting them into pieces. Then they quickly reheat them in the oven to crisp up the skin.

Half a chicken at Brider is $18 Redzikowski takes a different approach at Oak at Fourteenth, a full-service restaurant with a wood-fired oven in Boulder, Colo.

Roasting half chickens, he bones them and brines them for just 10 minutes and rubs them with a smoother paste then at Brider — chunks of garlic are fine on the rotisserie but less desirable in the oven.

He sears the chicken skin-side down in a hot, oiled cast-iron pan and then finishes it in the 650-700-degree oven until it’s around 85 percent cooked “and the skin is super-duper crispy.” Then he flips it and finishes it. He then removes the chicken and deglazes the pan with thyme, chicken stock and a squeeze of lemon at the end for a jus that he serves with the half chicken, left, for $26.

Laurence Edelman, executive chef of Left Bank in New York City, doesn’t flip the bird at all, cooking it entirely skin-side down.

“We just let the flesh side kind of roast from the heat of the oven and the juice that’s popping around,” he said.

That way, the skin side is crispy and the other side is soft and juicy. Also, he can easily check when the bird is fully cooked: Lift the tenderloin off the breast; if it’s cooked underneath, then so is the rest of the chicken. Left Bank currently serves the dish, left, for $28 with salt-and-pepper polenta, a rich chicken jus reduced with onions and red wine, and a light salad with radishes and carrots.

Charleen Badman, chef and owner of FnB in Scottsdale, Ariz., takes a similar approach to roasting chicken, based on what she learned working for legendary chef Anne Rozenzweig.

She leaves the wing and drumstick bones on the chicken and seasons it with salt and pepper, sometimes rubbing the inside with a blend of parsley, mint, white onion, lemon zest and a little basil.

She, too, sears it in a pan skin-side down and finishes it in the oven at around 450 degrees. FnB charges $26 for half a chicken.

Shaun Doty takes an even simpler approach at Bantam & Biddy, his fast-casual roast chicken restaurant in Atlanta. He simply rubs the birds with his own combination of spices, brushes them with butter and cooks them in a Combi oven at 0 humidity for 45 minutes at 350 degrees.

“They come out perfect every time,” he said. “You don’t have to turn it or anything.”

He charges $12.50 for a quarter chicken with two sides. Start with the bird

Regardless of how operators roast their chickens, increasingly they’re focused on making sure they get great birds.

Redzikowski of Oak at Fourteenth and Brider sources his chicken from Boulder Natural Meats, which raises them in Colorado in an open environment on a vegetarian diet where they’re never treated with antibiotics and are air-chilled rather than water-chilled.

All of that is now fairly standard among chicken-focused chefs. Obviously, they’re not all raised in Colorado, but they are generally raised pretty locally.

For most of the year, Badman of FnB gets her chickens from Two Wash Ranch in New River, Ariz., about 50 miles north of Scottsdale.

“They’re running around on the farm,” she said of the birds, adding that the farmer will experiment with feeding them things like Parmesan rinds to improve their flavor or paprika to give the eggs a red color.

In the summer, when Arizona is too hot for comfortable chicken farming, Badman sources from premium purveyors in California.

At Rotisserie Georgette, Farkas, too, gets vegetarian, antibiotic-free, free-range, air-chilled chicken. Hers are from Mennonite farmers in the area around Lancaster, Pa.

“I don’t need to know the bird’s first name,” she joked, “but I would like to know the farmer.”

They’re also older birds than commodity chickens, which are typically harvested at six or seven weeks. Instead the chickens Farkas buys are in the 11-week range.

“The walk around developing muscle.” She said. “They’re, like, birds.”

Le Coq Rico currently has five different chicken breeds on the menu — Brune Landaise, Plymouth Rock, Catskill Guinea Fowl, New Hampshire and Jersey Giant — and all between 110 and 130 days, or 18 and a half weeks, old. Paired with a seasonal salad, the chicken dishes range in price from $96 to $110, depending on the breed, and serve up to four people.

Le Coq Rico’s process for cooking the chicken is rather involved — first poaching in broth and then cooking in the oven before finishing it on a hot rotisserie — but the seasoning is simple.

“I like the taste of the chicken,” Antoine Westermann said in an email. “I just push his natural flavors with salt and pepper.”

Edelman of Left Bank actually has his chicken slaughtered to order by Madani Halal Meats of the Queens neighborhood of Ozone Park, N.Y.

He said the slaughterhouse owner, Imran Uddin, has farms in Pennsylvania. “I’ll call him at night and say, ‘Imran, I need 20 chickens for tomorrow’,” and Uddin trucks them in, slaughters them and brings them to Left Bank.

“When I get them, they’re still way too fresh to eat. They’re packed in ice, but the insides are still warm and you can still feel the life.”

So he lets them rest in the walk-in for two days before cooking them.

When Doty opened Bantam & Biddy in 2012, he wanted to use high end, pasture-raised chicken too, but he said those birds wouldn’t meet the expectations of his customers, who have grown accustomed to the roasted commodity chicken at supermarkets.

“I call it the Costco effect, because those suckers are cooked to the point where they’re falling apart,” he said. “I still believe in a toothsome bird, but when you cook one of those [pasture-raised chickens] they’re like athletes. They’re leaner and the meat is firmer when it cooks up. The chicken I cook up more conforms to what a customer expects at Costco or Publix or Whole Foods.”

Edelman of Left Bank agrees that the chicken he uses is quite different from what many consumers are accustomed to.

“I would say they’re way more chickeny,” he said. The legs, though not tough or stringy, “have a little bit more of an unctuous property, and the breast is just a really deep chicken.

“If you’re eating boneless, skinless chicken breast, this would taste much more like an animal, I would think.”