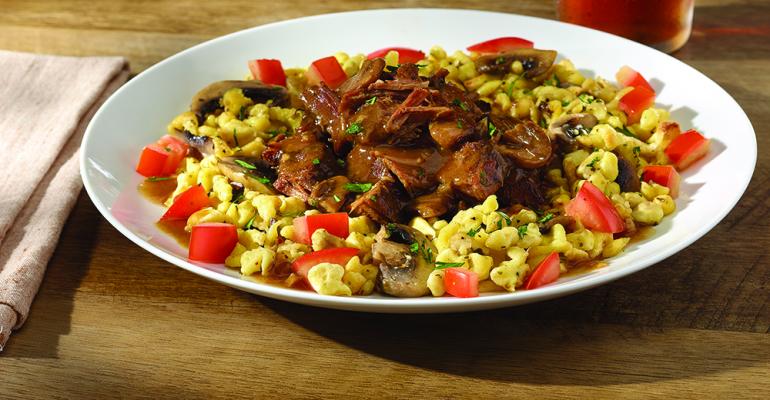 There is something about fall that seems to bring out our inner Teuton. The autumnal equinox signals the return of popular specials like Red Robin’s Oktoberfest Burger, which is topped with ham and melted Swiss cheese on an artisan pretzel bun; and municipalities as unlikely as Miami host celebrations that boast beer, brats and oompah bands in what the event planners in south Florida rather ominously call a “raging German experience.”

Most chefs, however, need no seasonal excuse to embrace küche classics like schnitzel, the breaded culinary forebear of chicken fingers that has been steadily trending upward for the past several years, and sauerkraut, which has been rediscovered as part of the fermented-foods boom. Less heralded by trend watchers, perhaps, but also enjoying an upward menu trajectory are spaetzle. 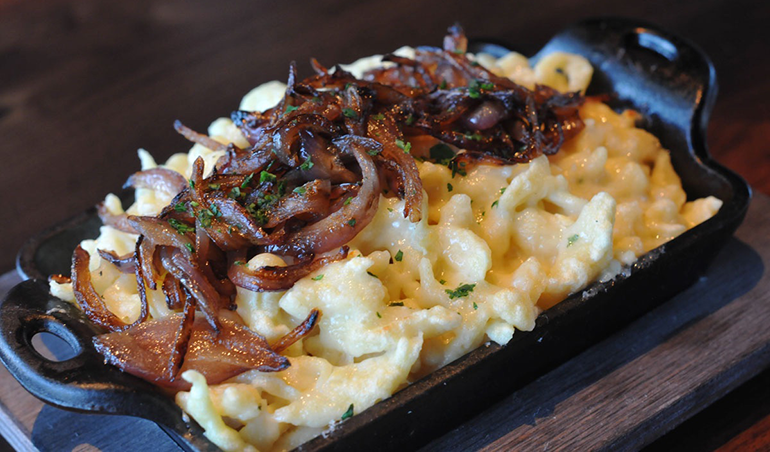 Kaiser’s Chophouse's KC Spaetzle are made with onions and Gruyère.

Spaetzle, which translates as “little sparrow,” are a simple mixture of flour, water and eggs. The resulting small dumplings, or arguably fat pasta, are a popular side dish at chic, trendy Kaiser’s Chophouse in Atlanta, where KC Spaetzle are made with onions and Gruyère. At Kurt’s Bistro in neighboring Duluth, Ga., Spaetzle Black Forest with double-smoked bacon, mushrooms and Emmenthaler make a hearty first course. The Radler in Chicago slyly substitutes spaetzle for fries in Loaded Käsespätzle, a vegetarian snack that covers buttered spaetzle with vegetables, cheese and pretzel crumbs. Josephine in Nashville takes its menu inspiration from the Pennsylvania Dutch pantry, which is reflected in the spätzle with ramps, bacon and whole-grain mustard, while Chicago’s lauded, meat-centric The Purple Pig plays with patron expectations by plating house-made spaetzle, red cabbage and fermented Brussels sprouts with an Italianate Pork Chop Milanese.

Chain menus sport spaetzle, too. At Kona Grill the Hawaiian Pomfret entrée comes with a multinational mash-up of macadamia nut romesco, garlic broccoli and spaetzle. Chicken Schnitzel with cremini mushroom spaetzle is a popular fixture at Gordon Biersch Brewery Restaurant, and this year sibling operation Old Chicago weighed in with a toothsome Oktoberfest special consisting of Beer-Braised Beef over spaetzle.  In the fast-casual segment, Bruegger’s Bagels touts its signature Chicken Spaetzle Soup as a tasty twist on conventional chicken noodle. 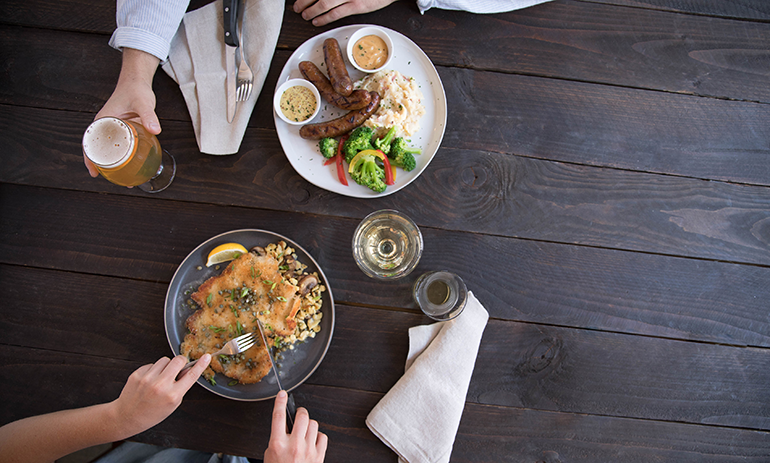 Little sparrows take wing in contemporary specials, as with the culinary flight of fancy that combined ketchup-fried rice with squid-ink spaetzle at Vintage in New Market, Md. More down to earth and also more in keeping with its Southern roots in Auburn, Ala., Acre offers collard green spaetzle alongside barbecued peanuts. At Bar Freud in New York City, Dark Rye Spaetzle with Cheddar and Cauliflower on the starter menu has been supplanted by an eclectic main course: Spaetzle with wild mushrooms, Taleggio, Gruyère, truffle oil and crispy onions.

Even more unconventional is the side dish at Euclid Hall in Denver, where spaetzle are topped with sauerkraut, 10K island dressing and Jarlsberg cheez-ums, with a sprinkle of parsley for good measure. The item harks back to an earlier Euclid Hall creation that paired spaetzle with homemade whiz, a white Cheddar cheese sauce that was a play on the popular, often maligned Cheez Whiz. A local reviewer at the time referred enthusiastically to the dish as “noodle crack.”

Rhein Haus is also in Denver, as well as Seattle, and describes itself as “Bavarian inspired” despite its unlikely mix of brats and beer with four bocce ball courts. The Spätzle Sp tjahr consist of house-made spaetzle, roasted butternut squash, oven-dried tomato, Swiss chard, cream, Grana Padano cheese and fried sage. That’s on the bill of fare for grownups, while a simpler, more approachable cheese spaetzle is on the kinder, or kids’, menu.

For many chefs, spaetzle are an invitation to innovate. That was clearly the case last winter at The Obstinate Daughter outside Charleston, S.C., where crispy sweetbreads were accompanied by sweet potato spaetzle, spiced cabbage, and celery leaf. At Geist, recently opened on the site of a former blacksmith shop in Nashville’s sizzling hot Germantown neighborhood, butternut squash spaetzle is crowned with Pecorino cheese. Babirusa in Seattle takes its name from a pig indigenous to Indonesia, and the cuisine is as far-ranging as the name suggests. Among the Pork Cracklins with Gochjuchang Glaze and Smoked Cod Hush Puppies with Chimichurri, diners can find Whole Wheat Spaetzle with blistered cabbage, juniper mustard and yellowfoot chanterelles. An honorable mention should go to storied Kansas City, Kan., eatery Story, which has served Campo Lindo Chicken from a local family farm alongside roasted black plums, huckleberries and almond spaetzle, an inventive and totally contemporary combination of sweet and savory.