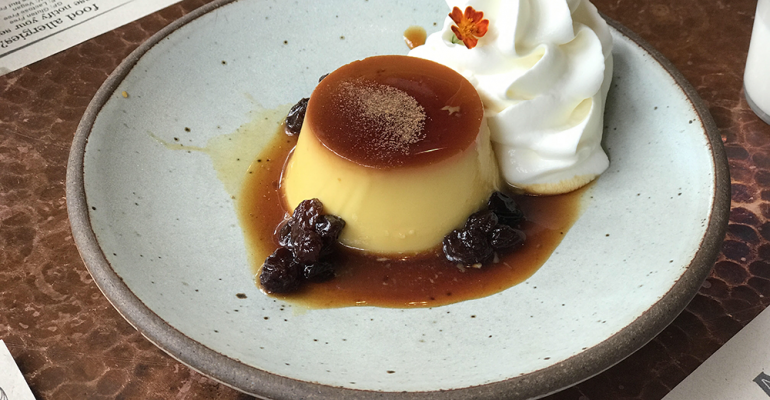 Chefs use smoke to add nuanced flavor to desserts, vegetables, cheese and butter

Smoking is a relatively simple method of adding robust flavor to meat, which explains why smoked meat continues to be a big trend on menus.

While animal proteins remain the primary recipient of the smoke treatment, chefs are increasingly using this preparation across the menu in much subtler ways, adding nuances of flavor to vegetables, cheese and butter, or deepening the flavor of desserts.

“Smoky flavors work really well with sweet, a flavor relationship that is seen in barbecue,” said chef Gregory Gourdet of Departure Restaurant & Lounge in Portland, Ore. “While most desserts won’t stand up to a barbecue treatment, adding light whispers of smoke to fruit-based desserts help deepen the flavor profile.” Berry and Rhubarb Tart with a smoked coconut curd at Departure in Portland, Ore.

Gourdet, a self-described “savory chef driving a pastry program,” is currently serving chocolate ganache that features the classic combination of chocolate and smoked chiles, and is finished with a ginger, peanut and coconut caramel filling and tamarind sauce.

He also serves berry and rhubarb tart with coconut curd made from smoked coconut milk made with Thai perfume candles scented with frankincense. Gourdet described the flavor as “a floral smoke that plays well with the berries, rhubarb and coconut curd.”

“The key to adding smoke to desserts is to use a light hand so it does not overpower the dish,” he said. “Find the type of smoke that makes sense for the type of dessert it is.”

Also adding smoke to dessert with a delicate touch is chef Katie Button of Curate in Asheville, N.C. Button is serving flan de huevo, an orange-saffron flan with smoked caramel and sherry-poached raisins. She uses a smoking gun to infuse smoke into granulated sugar that is then cooked to make the smoked caramel.

“When eating the flan, you can just barely taste it, which is the way I like to use smoke, not heavy handed. It shouldn’t smack you in the face,” Button said. “The subtle smokiness combines so well with the sherry-soaked raisins that are infused with vanilla, orange peel and cinnamon.”

Pastry chef Joshua Herrell enjoys working with unlikely savory ingredients in the desserts he creates for the Omni Bedford Springs Resort in Bedford, Pa. For example, on the menu at the 1796 Room steakhouse is smoked cherry cheesecake served with a thick sauce of boiled cherries that have been mixed with liquid smoke.

Perhaps a little less subtle are the smoky s'mores at Saxon & Parole in New York City. Chef de cuisine Nicole Gajadhar pumps smoke from a smoking gun into a 10-ounce Mason jar layered with warm chocolate pudding, lemon marshmallows, caramel, caramel crumble, graham crackers and graham cracker ice cream, and then seals the jar shut. When the seal is broken tableside, diners get a waft of bonfire aromas before digging into their dessert.

“I’m making shallot butter because compound butters are great for making simple sauces,” Lancaster said. “I’ve packed all of this beautiful charred and smoky flavor into a compound butter that I can use in a variety of different ways.”

Executive chef and partner Jaime Young of Sunday in Brooklyn in Brooklyn, N.Y., smokes butter for a dish of clams and mussels with fennel and absinthe that he's currently serving.

"We decided to smoke the butter to give more depth to the briny flavor of the clams and its juice,” Young said. “The absinthe adds a unique twist to the flavor profile, which would otherwise be common or familiar."

Steven Devereaux Greene, executive chef at Herons at The Umstead Hotel and Spa in Cary, N.C., is smoking butter and using it is various ways on his menu, including to make potato puree and finish sauces, or as a glaze for vegetables.

“To add a nice essence to the dish, we cold-smoke butter in a perforated pan,” Greene said. “It adds just small nuances of different woods to dishes without being overwhelming. Right now, I’m using smoked butter to glaze ricotta dumplings.”

Meanwhile, Khamla Vongsakoun, executive chef at the Denver location of Departure, likes smoked cashews and serves them with coconut cream in a warm roasted carrot salad.

Jimmy Bannos, Jr., chef and owner of The Purple Pig in Chicago, says olives and coconut are among his favorite foods to smoke.

“I like adding smoke as an element of unexpected rather than as the foundation of a dish,” Bannos, Jr., said. “The fat content helps carry the flavor and nuance of the smoke. A little bit goes a long way.” A better whey through smoke

“We make the dressing and then cold-smoke it for 30 minutes. It helps to reinforce the smokiness that is synonymous with jerk chicken,” Vermiglio said.