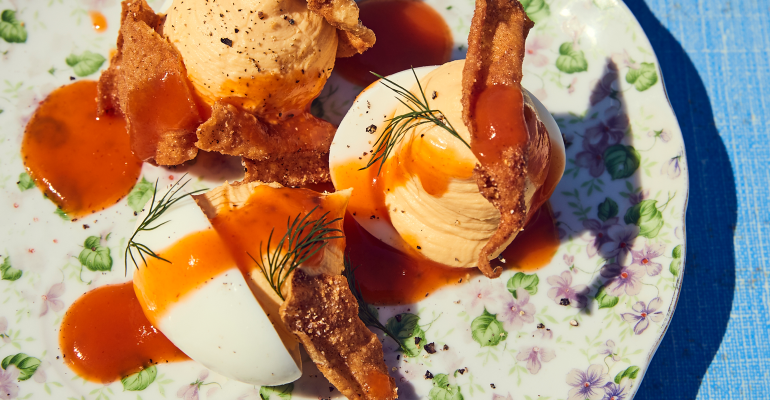 Skin gets a facelift

Animal outsides get a boost from Paleo diet and other trends

If there were an Index of Forbidden Foods, chicken skin would doubtless have led the list of most heinous dietary transgressions. In the mid- to late 20th century, concern over our growing collective girth led nutritionists to recommend chicken over beef, with an important caveat: The fat laden, flavorful chicken skin must be removed. That dietary dictate led to the enshrinement of the skinless chicken breast as an icon of sober and sensible, bland and boring consumption. The good news is that in the more enlightened 21st century, chefs are thumbing their noses at such prohibitions, and as animal fat is being rehabilitated, more and more of them have skin in the game.

Chicken skin is a natural ingredient in comfort food. In New Orleans, the celebrated culinary iconoclasts at Turkey & The Wolf offer Deviled Eggs with Fried Chicken Skins served with the house hot sauce, while The Obstinate Daughter in suburban Charleston, S.C., adds crispy chicken skin to its Chicken Bog, a Low-Country stew that includes sausage and locally-grown rice. Nearby Home Team BBQ promotes an alternative to the ubiquitous wing with Chicken Cracklins with a side of the requisite hot sauce and blue cheese.

There are more sophisticated applications, too, as at Here’s Looking at You in Los Angeles, where a recent special sturgeon entrée was served with aged rice porridge, chicken skin and buttermilk. Clear across the country in Brooklyn, N.Y., Faun features an appetizer of Chicken Liver Mousse on an English muffin accompanied by a skewer of fried chicken skins.

Chicken skin is turning up in some surprising places, like the Monterey Salad at 27-unit Cowboy Chicken, where chopped greens, avocado, Monterey Jack cheese and tomatoes are topped with wood-fired rotisserie chicken, but in a clever and creative change-up, seasoned chicken skin and toasted cheese crisps add the crunch usually provided by more prosaic croutons. While chicken skin in a salad is unexpected, its use in desserts is positively jaw dropping. Yet that’s exactly what diners will find at Bantam King, a ramen-and-fried chicken operation in Washington, D.C. which offers ice cream sandwiched between fried chicken skin. And the ice-cream wizards at Coolhaus concocted a Fried Chicken and Waffle option with fried-chicken-skin caramel. 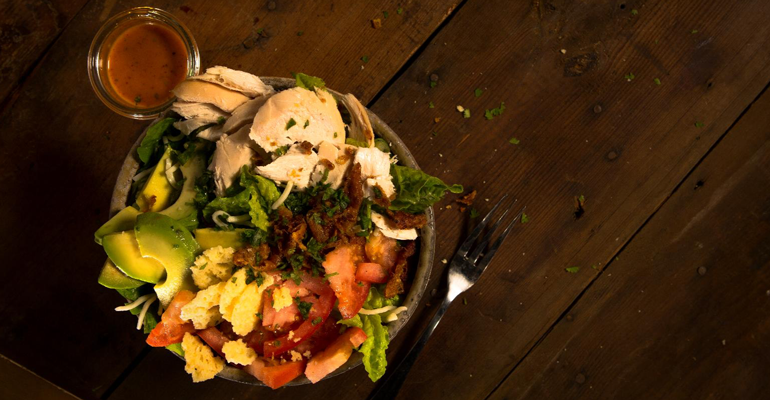 The Monterey Salad from Cowboy Chicken

Pigskin is for more than footballs. Isaac Toups, chef-owner of Toups’ Meatery and Toups South in New Orleans, should know. He claims to sell an astonishing 1,000 pounds per week of the stuff; his popular pork cracklin’s are offered à la carte at both eateries. Like its poultry counterpart, pig skin has been turning up in dishes both humble and haute. The former include the pig-ear crackling in Turkey and The Wolf’s Cabbage Salad with roasted chile vinaigrette, and the Freshly Fried Pork Rind Basket with mambo sauce that graces the brunch menu at Sweet Potatoes in Winston-Salem, N.C. The latter is epitomized by Pig Skin Pomodoro at protein-centric Cockscomb in San Francisco, where it is prepared with cherry tomatoes, garlic and basil. In a classy variation on the theme, the duck confit starter at AhSo in Washington, D.C., is glazed with huckleberry sauce and plated with sweet potato gnocchi, but it eschews skin in favor of crackling speck.

Chicharrónes, Spanish for pork rinds, are fundamental to Mexican and other Latin cuisines, of course, and they have also received a boost from the low-carb and Paleo diet trends. San Francisco’s 4505 Meats, one of the new wave of artisanal butcheries, and sister restaurant 4505 Burgers and BBQ nod to all these trends with chicharrónes made from sustainably raised hogs and fried in lard, the rediscovered cooking fat of choice.

Other chefs are also in the skin game. Fish skin is receiving some play, as at Yusho in Chicago, where salmon skin popped up as a bar snack, or at Timna in New York City, where Sashimi of Sea Bass is accompanied by tabbouleh and crispy fish skin. At Eight Tables by George Chen, a fine-dining restaurant in San Francisco’s China Live food hall, a Barbecue ”Shao Kao” puts Kaluga caviar on duck skin. And there’s no need for vegetarians to sit this one out. Split-Rail in Chicago offers an ingenious Baked Potato Gnocchi, which pays homage to its namesake with sour cream, bacon and Cheddar cheese. The topper: a sprinkle of crispy fried potato skins.