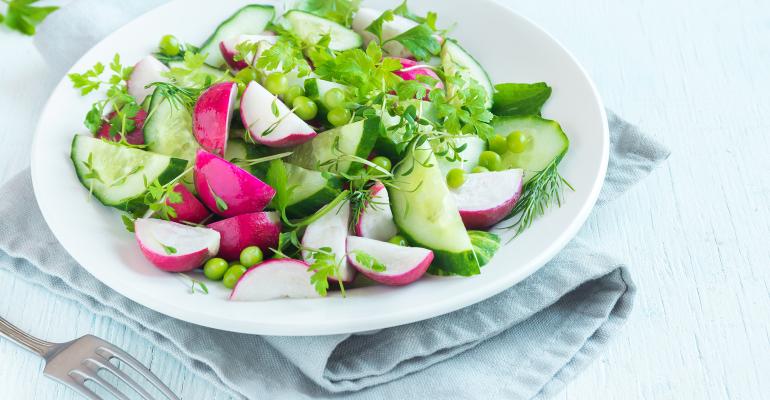 An unlikely star emerging from the boom in plant-based cuisine is the radish, a humble root vegetable that until recently has received relatively little love from chefs. Its meteoric growth rate, which market researchers at Technomic peg at 300 percent last year, actually took off just prior to the trend in vegetable-forward foods. Radishes received an early boost from the street-food craze, especially Korean rice bowls and Mexican tacos, of which they are an integral part and to which they add both taste and texture. Restaurateurs of all types are now exploiting these same attributes on their own menus.

As an appetizer. Diners at Dame, which dishes up seasonal specialties in Portland, Ore., can start their meals with a bread plate accompanied by pickled radish, butter and smoked salmon mousse. A tasty first course at The Macintosh in Charleston, S.C., is an update on classic crudités that plates radishes and carrots with radish-top butter and sorrel. At nearby Butcher & Bee, patrons can order grilled radishes with honey harissa, brown-butter tahini, dried mango and almonds. San Francisco’s AQ scored with a beautiful radish carpaccio, its paper-thin slices artfully arranged and topped with dried-plum-and-miso dressing. Bullion in Dallas created a sophisticated take on steak tartare that is finished with smoked cream, radish and crispy farro. Equally innovative is the roasted bone marrow with mint, black-garlic salsa, radish and bread crumbs at Burritt Room + Tavern in San Francisco.

In salads. A recent special at Motel Morris in New York City, which despite its name is a restaurant and not a lodging place, was wilted kale-and-radicchio salad with radishes, feta cheese, dates and pumpkin-seed pesto. Dennis Dean Catering in Atlanta offers clients a salad station; among the toothsome options is watermelon radish and burrata with micro basil and house balsamic on toasted brioche. Kismet in Los Angeles has garnered rave reviews for potatoes with fennel and radish salad that gets a boost from lemon juice and mustard seeds. Four-unit Living Kitchen, based in Charlotte, N.C., features an oyster mushroom and kale salad with walnuts, green cabbage, carrots and sliced radishes tossed in an orange-ginger dressing.

With an entrée. The bill of fare at Mama’s Boy in Athens, Ga., includes vegetable and potato hash with radishes, Brussels sprouts and chive hollandaise. Pork chops at The Durham in Durham, N.C., are served with radishes and charred scallions; in a similar vein, a pork shank special at Lone Buffalo in Ottawa, Ill., came with warm white bean ragoût topped with radish salad.

As a condiment. The radish reliably adds a pop of color and punch of flavor to what might otherwise be a bland offering, as at The Cheesecake Factory, where the avocado toast on the “Super” Foods menu benefits from marinated tomato, watercress, radish and red onion drizzled with extra-virgin olive oil and lemon. Likewise, the Open Faced Toast on the snack menu at Chicago’s Columbus Tap marries crushed avocado with lemon, shaved radish and hot pepper. The promotional Coconut Summer Chicken Salad Roll at the Pret à Manger chain came with radish, pickled red onion and arugula in a dressing made from coconut cream and avocado.

Looking ahead, we will likely see growing use of radish varieties like daikon, a white, mild-flavored Asian winter radish. At 1789 Restaurant in Washington, D.C., tuna crudo is accompanied by daikon, wasabi tobiko and fried kelp crowned with fermented chile vinaigrette. At P.Y.T. in Los Angeles, Bincho-Roasted Kanpachi boasts China Rose, also a mild winter radish varietal, along with greens, ghee and sea salt. And some enterprising operators may follow the lead of Atlanta’s Star Provisions and provide a casual, French-style nosh of raw morning or breakfast radishes served simply with a dish of butter and salt for dipping.