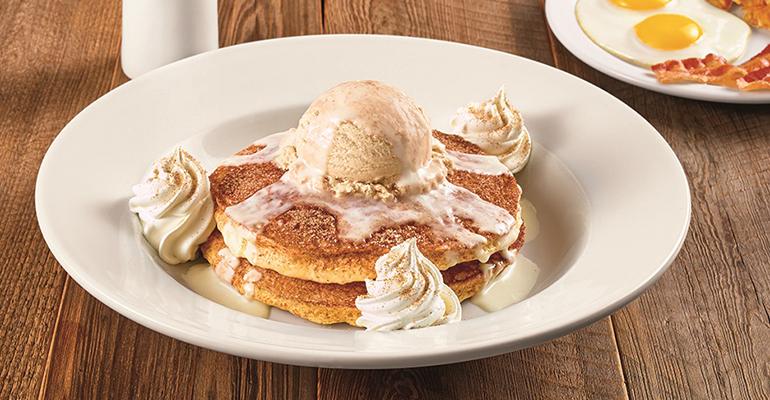 Pancakes speak an international language of comfort, whether paper-thin crêpes in France, more substantial blini in Russian and Ukraine or beloved palacsinta in Hungary. On these shores, however, creativity has been nudging out comfort as the hallmark of the contemporary pancake menu.

Basic pancake batter makes a neutral carrier for a range of savory ingredients. At Bonefish Grill, a subsidiary of Bloomin’ Brands based in Tampa, Fla., Seafood Johnny Cakes & Eggs are available as a brunch entrée at its roughly 200 locations. They consist of corn-based mini pancakes blended with roasted shrimp and bay scallops, then topped with two poached eggs and Creole sauce. Lazy Dog Restaurant & Bar, based in Costa Mesa. Calif., makes happy hour a little happier at its 30 units with Peking Pork Belly Pancakes, in which the protein is paired with charred sweet corn and scallion pancakes, then finished with spicy carrot slaw and hoisin sauce.

Related: First restaurant with cannabis on the menu to open in September

Cutting edge independents give chains a run for their money. Milktooth, a celebrated breakfast-and-brunch specialist in Indianapolis, taps into the Mediterranean trend with Tomato & Cucumber Tabbouleh Dutch Baby Pancakes that also feature feta, za’atar, sumac, pine nuts and lemon vinaigrette. In Port Chester, N.Y., Eugene’s Diner & Bar offers an updated take on diner fare and gives patrons the option of topping fluffy pancakes with indulgent foie gras for an upcharge of $12. Meanwhile, in Charleston, S.C., popular Xiao Bao Biscuit looks to the East with okonomiyaki, which translates as “how you like” and refers to customizable Japanese pancakes that can be topped with bacon, egg or bonito flakes called katsuobushi.

Pancake batter works equally well with sweet stuff, of course.  A good case in point is the new Tres Leches Pancake Breakfast at Denny’s nearly 1,600 locations. Buttermilk pancakes are cooked with cinnamon sugar and then crowned with horchata ice cream, whipped cream and warm cream sauce for “an authentic tres leches experience.” IHOP takes a similarly cosmopolitan approach at its 1,700 units with Mexican Churro Pancakes and Italian Cannoli Pancakes. The latter are stuffed with ricotta cream and chocolate and rolled up to better approximate their dessert namesake. Corner Bakery Cafe pays homage to a treat from New Orleans at its roughly 180 restaurants with Bananas Foster Pancakes with caramel, whipped cream, candied pecans and vanilla maple syrup.

Pancakes can also be better for you. It has been three years since Denny’s shook up its pancake recipe by upgrading and simplifying basic ingredients to four: fresh buttermilk, real eggs, flour and a hint of vanilla. Customers have flipped for the improved, hand-mixed version of the standard, which has the clean labels that health-conscious consumers often look for, and the chain further boosts its better-for-you bona fides with Hearty 9-Grain Pancakes with flaxseeds.

IHOP was on this bandwagon decades ago with its Rooty Tooty Fresh ‘N Fruity Pancakes; perhaps because of the memorable and amusing name, they remain a favorite and weigh in at a relatively modest 600 calories or so per serving. Rockville, M.D.-based Silver Diner, with 16 locations, takes a more current approach with gluten-free, vegetarian-friendly Quinoa Coconut Pancakes with blueberries, pecans, strawberries and trendy agave.

Other operators eschew dietary responsibility altogether in favor of the whimsical and unexpected. That’s true at Bone-In Barbecue in Columbia, S.C., which features the clever Saturday Morning Cartoon Plate with Fruity Pebbles pancakes and cheesy eggs, and it also applies to Tie-Dyed Pancakes with M&Ms, which is on the kids’ menu at Friendly’s, which has around 175 locations.

IHOP had fun of a different sort this summer when it introduced a limited-time “pancake” menu that actually consisted of three premium burgers. It was an attempt to show that the chain takes its burgers as seriously as it takes its namesake pancakes, one of which, The Big IHOP, was actually served with a pancake in the middle.

And the category has received shot in the arm with the recent arrival in the United States of Japanese souffé-style pancakes. Whipped with egg whites and presented in a fluffy, towering stack, they make magic on Instagram, and diners on the East and West Coasts have been lining up to snag one of the lighter-than-air specialties.