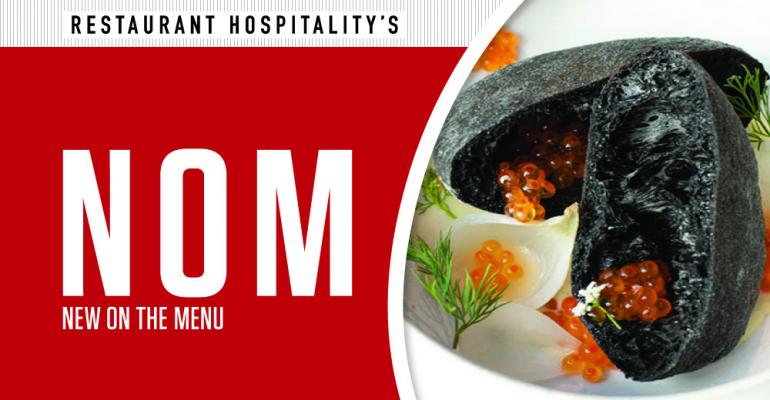 Those of us at Restaurant Hospitality regularly see what operators are dishing out, but some menu items make us stop and stare — whether they involve an out-of-the-box way of using an ingredient, the appearance of a burgeoning trend or simply stunning presentations. We bring you NOM: our New on the Menu roundup.

There’s a lot of culinary activity coming out of North Carolina these days, which is likely one reason that celebrity chef Katsuji Tanabe, who made his name in Los Angeles and Chicago, has moved there. He’s embracing his new southern surroundings by using local ingredients such as southern ham and oysters, which he combines for a unique surf & turf appetizer.

Also in Raleigh, Logan Atkinson, pastry chef for the local branches of Indigo Road Restaurant Group, which is based in Charleston, S.C., is turning a southern staple — banana pudding — into a fine-dining dessert in the form of a baked Alaska.

Across the state in Asheville, Jacob Sessoms is getting the most out of his shell beans, roasting the pods to make a stock and using them to cook the beans for a distinctive cassoulet.

In New York City, Brooklyn Chop House is celebrating the city’s Jewish and Chinese cultures with matzoh ball soup dumplings, and in Los Angeles, pita gets new color and a dash of seafood with the squid ink pita at M.Georgina.

Read on to learn more about these innovative dishes that are new on the menu.