Greenpoint Fish & Lobster in Brooklyn, N.Y., is both a seafood supplier and a restaurant, so it has plenty of trim to make things like this sandwich, which executive chef Orion Russell describes as “a tuna melt meets In-n-Out Burger.”

Intentionally fast-food-like in construction, the dish is comprised of two thin patties of yellowfin tuna that has been scraped from the fish’s carcass. That trim is combined with a paste made of shiitake mushrooms sautéed in coconut oil and tamari. They’re grilled and served with melted cheddar cheese blended with ají amarillo and “special sauce.”

Eli Kaimeh, the former executive chef of Thomas Keller’s Per Se restaurant, is now heading up the kitchen at Tavern by WS in New York City’s Hudson Yards development.

For this fine-dining, appetizer-sized version of pork and beans, he cures kurobuta hog jowl, then braises it and crisps it in a pan. He uses the braising liquid to glaze a combination of cannellini beans and green and yellow pole beans. He serves it with a sweet-and-spicy green tomato chow-chow, sliced pickled green tomatoes, fried shallots, pea shoots and mustard cress.

Seamore’s is a five-unit casual dining chain in New York City with a focus on sustainable seafood. Monkfish is not only an underutilized fish that is abundant in the North Atlantic, but it also has a rich, meaty texture that allows it to hold up better in a sandwich than flakier fish such as pollock, haddock or hake, with tend to fall apart. For this sandwich, monkfish fillet is blackened and served with tartar sauce, pickles and pickled carrots on a buttered, toasted bun. 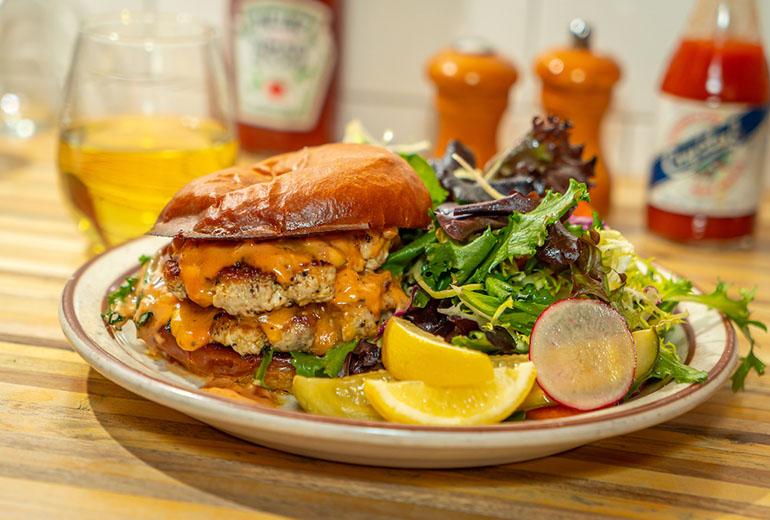