Christiaan Röllich, beverage director of The Lucques Group of restaurants in Los Angeles, was inspired by chef-owner Suzanne Goin’s green harissa for this cocktail, which is available at A.O.C. He purées parsley, cilantro, seeded jalapeños, cumin and caraway seed in a blender, strains it and mixes it with a strong simple syrup made with three parts sugar to two parts water. He adds that to Bols Genever, a Dutch spirit, for what he says is “basically a fancy gimlet.” Röllich said he likes to make syrups on the sweeter side so he can use less of them and more alcohol.

At Blackship, a new restaurant in Los Angeles, executive chef Keiichi Kurobe uses local sea urchin, or uni, as the highlight of this pizza, which is made with sweet potato dough and topped with ricotta, pickled Fresno chiles and a little Fontina cheese. Then it’s baked and finished with shiso, scallions, uni and a light drizzle of honey.

This Side of Paradise
Nick Solares

Chumley’s in New York City’s West Village is celebrating its status as a favorite haunt of F. Scott Fitzgerald with this large-format punch named for the writer’s first novel. Served in teacups in a nod to the restaurant’s Prohibition-era history, the drink is made with white rum, the wine-based aperitif Byrrh and a combination of lime juice, Earl Grey tea, masala spices and simple syrup. It’s garnished with edible flowers and an inverted lime peel that’s lighted right before it’s served

Chef Johanna Hellrigl of Doi Moi in Washington, D.C., puts a Southeast Asian twist on Mexican street corn with this dish, for which she poaches corn in coconut milk and then brushes it with fish sauce caramel while finishing it on the grill. She garnishes it with kaffir lime aïoli, scallions, coconut flakes and chile salt.

Sisters Aminata and Rougui Dia draw inspiration from the Senegalese-French upbringing at Le French in Denver. For this dish they season rabbit with thyme and orange zest and wrap it in phyllo dough along with mushrooms, foie gras and, as a binder, slow-cooked beef feet. It’s baked and topped with tamarind-orange gastrique.

At Tigertail & Mary in Coconut Grove, Fla., executive chef Stephen Ullrich wanted to accompany his New York strip with ingredient that “would let the steak do the talking.” So, apart from grilled broccoli and cipollini onions, he made his own riff of tahini with sesame, sesame oil, soy sauce, scallion and ginger.

“The special sauce has an inherent umami flavor and beautifully complements the broccoli and steak,” Ullrich said. For texture, more umami and another Middle Eastern tie-in, he garnishes the dish with peanuts tossed with sumac. 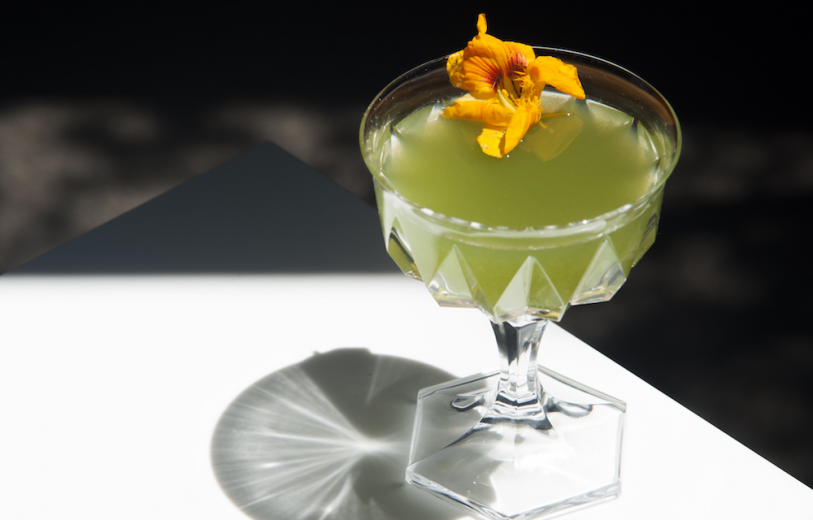 Next Up
New on the Menu: Burmese tea leaf salad and a Lebanese taco
Start Slideshow ›