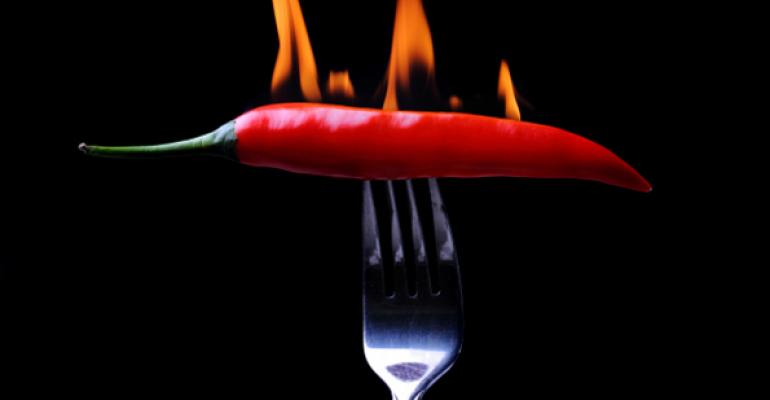 Consumers are hungrier than ever to try new flavors and by reinvigorating old classics with new and unique twists, restaurants can draw new and repeat business, according to the latest study from Technomic.

Seventy-three percent of consumers say if they try and like a menu item with an innovative flavor, they’d be highly likely to return for the same item. Forty-one percent say new flavors can influence their dining decisions.

It’s no wonder even Subway has jumped on the Sriracha bandwagon. The fast-casual chain last week embraced the trendiest of flavors with its chicken and steak melts made with the spicy Asian sauce.

Technomic’s survey shows 54 percent of today consumers prefer very spicy foods and sauces, compared to just 48 percent in 2011 and 46 percent in 2009. Savory, though, is the most popular, with 67 percent of consumers saying they find those flavors appealing or extremely appealing.

“In a competitive foodservice climate, flavor differentiation is a must-have for operators,” says Darren Tristano, e.v.p. of Technomic. “Because today’s foodservice consumers have such a strong expectation for innovative flavors, operators and suppliers have to help the menu stand out by staying ahead of the flavor curve. Knowing which flavors are up-and-coming and truly enticing to guests will be essential in gaining their dining-out dollars.”

Flavor synergy is another top trend to keep an eye on, with sweet being the most versatile flavor, pairing well with others like savory, sour, smoky or spicy, according to Technomic’s data. Flavor blends are also tracking, especially tomato-basil and honey-ginger, although chipotle-lime, rosemary-orange and mango-habanero have also gained ground.

Benjamin Stanley, the cofounder and v.p. of menu tracker Food Genius, has noticed the same trend. “ Operators are taking off-the-shelf sauces like ketchup, mayo, ranch dressing and mustard, and adding their own twists in flavor,” he says. “A little tweaking can go a long way to create differentiation among others who are often serving many of the same items.”