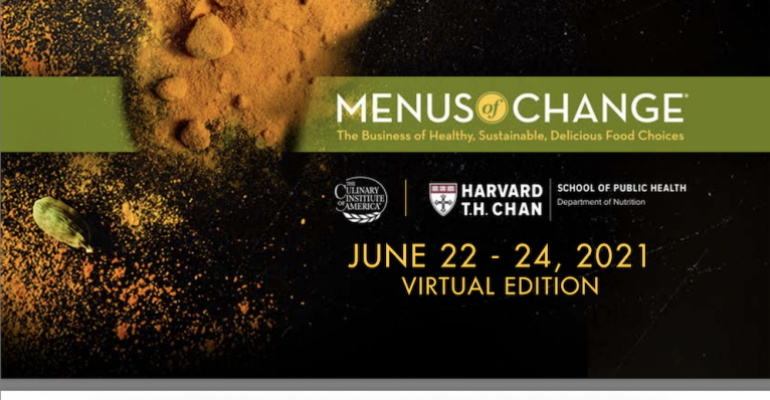 The annual conference shares the latest research into strategies for improving the nutrition of Americans and reworking the food system to reduce its impact on the environment.
Food & Drink>Food Trends

Menus of Change: Health and climate crises can both be addressed by the same diet

The number of deaths in the United States was up by 15.9% in 2020, and although that was largely due to the more than 600,000 Americans who perished from COVID-19, up to half of those pandemic-related deaths could have been prevented by better diets.

That was according to research presented at the recent Menus of Change conference, hosted virtually by the Culinary Institute of America and the Harvard T.H. Chan School of Public Health.

Related: The sustainability question: How much do customers care, and what should restaurants do about it?

The annual conference shares the latest research into strategies for improving the nutrition of Americans and reworking the food system to reduce its impact on the environment. Restaurant and onsite foodservice operators are a major part of the audience.

Nutrition professor Walter Willett, chair of the conference’s scientific and advisory council and past chair of the Chan School’s nutrition department, kicked off the conference with the grim observation about public health and COVID, pointing out that many of the underlying conditions that accompanied most of the deaths were diet-related.

“Factors related to nutrition — obesity, diabetes, hypertension, heart disease and low vitamin D levels — have greatly contributed to the probability of dying once someone gets infected,” he said.

He added that current research indicated that 25%-50% of pandemic-related deaths among Americans could have been prevented if the victims had been healthier.

Ultra-processed foods were cited as a major contributor to Americans’ poor health during the conference, but the excessive consumption of meat in general and beef in particular were discussed as major contributors to global warming. The general message from the meeting was that a shift to a “plant-forward” diet, in which most of what we eat is minimally processed fruits, vegetables, nuts and whole grains would help alleviate both problems.

This shift would be easier if Americans were less concerned about getting enough protein, something they shouldn’t be concerned about, according to Christopher Gardner, the director of nutrition studies at the Stanford Prevention Research Center. Gardner said Americans on average get twice as much protein as they need and that, contrary to popular belief, plants have protein, too. He said that if Americans cut back on protein by 25% and shifted another 25% from animal protein to plant protein, we would exceed our recommended daily allowance of nutrients and reduce our greenhouse gas emissions.

We’d also decrease our water use by 10%, he added.

Arguments were also made for greater consumption of seaweed, which is nutritionally dense and gentle on the environment. Although 12,000 types of seaweed exist, only 10 types have been domesticated. Research has found that incorporating it into cattle feed can reduce methane emissions. Further, as 80% of seaweed producers are women, supporting the industry could also help support greater gender parity.

Many Americans are ready for a change in diet, according to menu research firm Datassential, whose president, Jack Li, presented the newest Plant-Forward Opportunity Report in collaboration with the CIA and Menus of Change University Research Collaborative.

Li said that, although 69% of Americans put no restrictions on their meat consumption, 58% said they would like to eat more plant-based (another term for vegan) food.

Li said people who are resistant to plant-based protein can be won over by promoting delicious dishes that happen to be plant-forward or meatless, rather than focusing on the use of plant-based alternatives.

This was underscored by the fact that, according to Datassential’s report, 52% of Americans claim to eat fruit and/or vegetables daily, 29% say they eat whole grains and 23% nuts and/or legumes daily, compared to 11% who eat plant-based meat substitutes every day.

Eve Turow-Paul, founder of the Food for Climate League, said that, although many Americans have expressed an interest in changing the way they eat toward a more plant-forward diet, “so many of us feel like we are being held back and kind of pigeonholed into a corner.

“A lot of that has to do with the framing,” she added. “One of the most basic findings that Food for Climate League had early on in our research is that so often plant-based meals are framed in the negative. … So often we read the menu description and it's all about what's not in the dish, so you don't really know what it is that you're eating.”

She said meatless items also are often framed as being substitutes for the real thing, “instead of just celebrating all of the plant-based dishes that there are out there in the world.”

Noting that most of the world eats plant-forward diets already, there are many global culinary traditions to choose from that would allow Americans to eat less meat while also enjoying delicious food.

“We should be focusing on flavor, on texture, on heritages, different traditions,” she said. “Really when you open your eyes to the culinary creativity that is available to us it becomes more exciting.”