MenuMasters: Trend-setting dishes from across the country 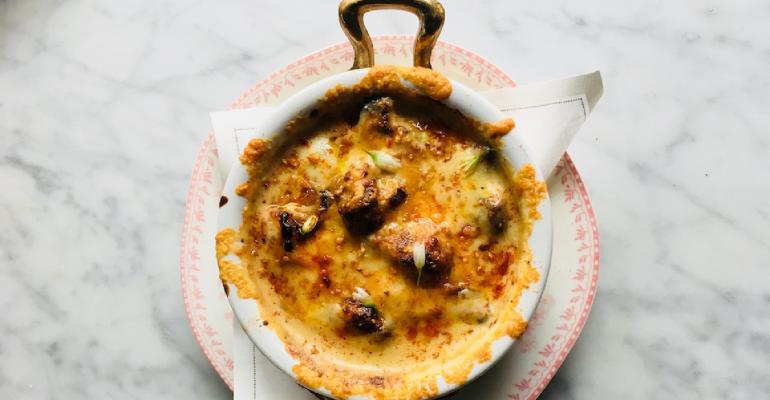 Start Slideshow ›
A look at cross-cultural appetizers, summery cocktails and salads and the latest in plant-based innovation

MenuMasters celebrates culinary innovation across the country, and this gallery shines a spotlight on menu items by forward-thinking chefs and beverage developers who are helping to move the industry forward.

That includes Jonathan Shepard, the chef of Wildflower at the Grey Fox Inn in Stowe, Vt., who dresses Spanish octopus in Korean ssam sauce and serves it as a bao, and Sujan Sarkar of Baar Baar in New York City, who takes chicken roasted in a tandoor and puts it in mac & cheese.

It also includes Tiffany Derry, who takes a popular appetizer, hummus, and reinterprets it by using a different legume popular with many Black Americans, black eyed peas.

This has been the summer of watermelon, with the fruit appearing in even more menu items than usual, particularly in beverages, so we’re highlighting that trend with the Watermelon Margarita that’s currently available at Abuelo’s Mexican Restaurant, a chain out of Plano, Texas.

Every summer is a tomatoey summer, and that’s being emphasized at Pomella, a Mediterranean restaurant in Oakland, Calif., where chef Mica Talmor is offering a Shirazi salad, and recommends using the juice that runs out of the vegetables as an addition to Dirty Martinis.

Finally, we look at the latest in vegan innovation with the plant-based protein dressed up as seafood that’s being tested at Long John Silver’s.

Indies see chicken thighs on the rise as they experiment with wing alternatives
Aug 19, 2021