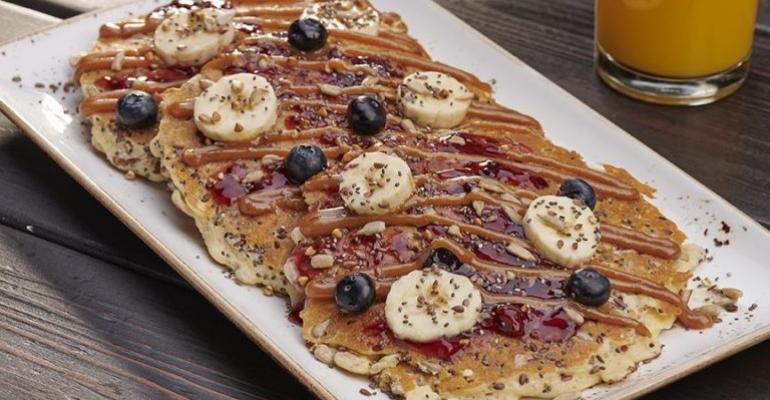 It’s all about the crunch

Supermarket industry analysts have been busily touting the emergence of tactile foods as the next big trend. An emphasis on crunchy texture and its accompanying aural effects creates a memorable, multisensory eating experience, they proclaim. While this may seem cutting edge on the supermarket side, for restaurant chefs, it’s just another day in the research & development kitchen.

Menus are getting pretty seedy. Restaurateurs are employing a wide variety of seeds to add textural interest to their dishes, but these days pumpkin seeds are first among culinary equals. This is especially true in the fall, when pumpkin seeds, or pepitas in Spanish, pop up all over menus. The seasonal Harvest Grain & Apple Salad at Columbus, Ohio-based Piada Italian Street Food, for example, received a boost from pumpkin seeds and pecans, while the Autumn Harvest Salad at Saladworks, based on Conshohocken, Pa., upped the flavor quotient with smoked-paprika pumpkin seeds. But they’re not just an autumnal treat: The Kale Salad on offer year-round at Mighty Quinn’s Barbecue in New York City marries kale with shaved brussels sprouts and pumpkin seeds.

A Wall Street Journal report last fall noted that sunflower seeds have been gaining recognition as a super food, which has made them popular additives to better-for-you dishes like the Super Seed Protein Pancakes at First Watch based in Bradenton, Fla., a limited-time promotion this winter that featured sunflower, flax and chia seeds in a multigrain pancake. Grains & Seeds, a specialty at Harold’s Kitchen in Charleston, S.C., is a literal combination of wheatberry, quinoa, hemp, chia seeds, sunflower seeds and kale in benne seed vinaigrette. Benne, by the way, is the Southern name for sesame seeds, and they are found on many Low-Country bills of fare, as with the fried chicken livers with honey, benne and chives at Tallulah in Columbia, S.C.

Speaking of super foods, chia seeds are also getting lots of play for their purported nutritional benefits. They are part of the All Day Breakfast Açaí Bowl alongside fruits, granola and cacao nibs at four-unit Happy & Hale, which is headquartered in Raleigh, N.C. Nutrition, however, is likely secondary at Compère Lapin, the lauded Caribbean-Creole operation in New Orleans, where the Chia Seed & Coconut Pudding served with fresh berries provides a sweet finish during brunch.

Other menus are going nuts. Nuts also benefit from a positive health halo, especially when substituting for animal protein. This is the case with the Nacho Bowl at Half-Peach Bakery and Café, a vegan operation in Louisville, Ky.; it is made with raw taco “meat” consisting of spiced almonds, walnuts and sunflower seeds. Nuts also add appealing chew and an upscale image to dishes like Ancient Grains Porridge at trendy Milktooth in Indianapolis, which is topped with toasted pistachios, or the chicken liver tart at Atlanta’s Staplehouse, which is finished with hazelnuts. The chilled spicy noodles at Momofuku Noodle Bars in New York and Las Vegas are enhanced with the addition of Thai basil and candied cashews.

While peanuts are ubiquitous on menus, for some operators they provide the starting point for unexpected and innovative items like Foie Gras PB&J Ice Cream at frozen-dessert specialist Coolhaus that combines Hudson Valley foie gras with salty peanut butter and fragolini — sugar soaked Italian strawberries. In a similar vein, diners at Win Son Taiwanese Restaurant in Brooklyn, N.Y., can order their Tian Miantuan ice cream dessert with butter-fried peanuts and cilantro for $2 extra.

Many menus are cracking up. Chefs employ a range of other ingredients to make menu items munchable. The Jalapeño Turkey Crunch Sandwich at McAlister’s Deli’s, based in Atlanta, received the promised crunch from the jalapeño kettle chips tucked under the bun. Likewise, RHBQ, the new iteration of the Red Hot & Blue barbecue chain based in Winston-Salem, N.C., features Frito Pie in which house-made spicy chili, queso blanco, sour cream, cheddar cheese and the titular Fritos corn chips are served in a snipped-open Fritos bag, as is the custom in the south.

Taco Bell, of course, is no stranger to menu items with snap. The chain has been CrunchWrapped and Fritos Burrito-ed, and the Yum Brands subsidiary caused a sensation with the 2012 introduction of the Doritos Locos Tacos in which the crispy taco shells were made from Doritos. At the time, they were Taco Bell’s most successful new product introduction, and they remain menu standards with Cool Ranch, Nacho Cheese and Fiery Doritos options.