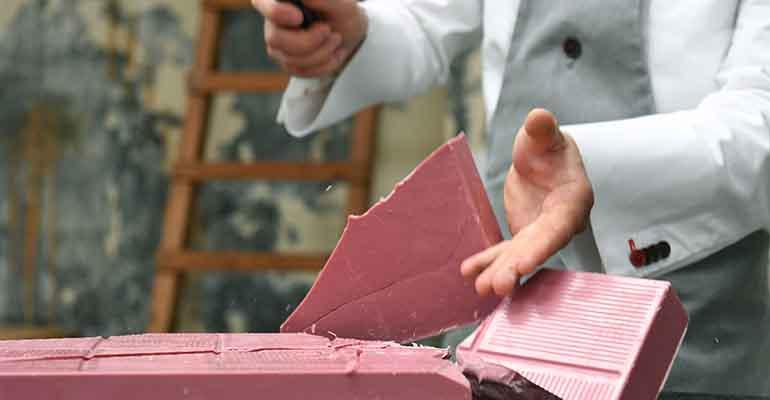 Invented by chocolatier Barry Callebaut, this pink-hued confection debuted in 2017 and is becoming a sweet trend

Just in time for Valentine’s Day, chocolate has added a fourth member of the family: the pink-hued, fruit-forward ruby chocolate. Although ruby chocolate was invented by Swiss chocolatier Barry Callebaut in 2017, it only just received Food and Drug Administration approval for marketing as a chocolate variety in November 2019.

As a result, we’re slowly starting to see chefs play with this new chocolate, from using the simultaneously sweet and tart berry flavor profile as a base for ice cream, to making creamy chocolate bars and chocolate mousse with ruby cocoa.

“Ruby cocoa is just a cocoa bean that naturally presents the unique components that give it its pink color and unique fruity taste,” said Juan Gutierrez, pastry chef at Virgin Hotels Chicago.

Gutierrez recently helped to curate sweets for a holiday popup candy shop at Virgin Hotels Chicago in December and January, and he particularly gravitated toward using ruby chocolate since it presented such a playful color. He was inspired to make ruby-matcha hot chocolate, chocolate bars dotted with pistachios, and ruby mousse stuffed with violet crémeux.

For Valentine’s Day, he is taking advantage of the appropriately festive color to spray dark chocolates with ruby chocolate to help develop red-and-pink chocolate Valentines without using white chocolate as a crutch.

“People often don’t understand that there is no flavor or dye added to it, it’s just chocolate. There’s nothing else like it on the market.”

Ruby chocolate was in development for decades before Barry Callebaut introduced it to the public in 2017. By using the correct selection of bean (the ruby cocoa bean) and processing (made with 47% cocoa solids, 26% milk solids, and 2.5% fat-free cocoa), Callebaut’s team “discovered” the first new chocolate variety in more than 80 years.

Although he does not own the patent to ruby chocolate — and subsequently, other chocolate makers could begin to produce ruby chocolate on their own at any time — Callebaut is tight-lipped about the manufacturing process and almost makes its conception sound mystical.

“Within the beans they have been sourcing for years, [the Barry Callebaut research and development team] found new unique attributes,” a representative from the chocolate company said. “Barry Callebaut had to understand how they had awakened mother nature and develop a process to activate the naturally present precursors in the cocoa bean that are responsible for the flavor and color tone they had unlocked.”

After a hiccup in 2018, in which the new FDA definition of chocolate excluded ruby chocolate, the FDA granted a temporary permit in November 2019 to Barry Callebaut to market test 60 million pounds of the chocolate.

The permit for the first batch — known as RB1 — is good for 15 months while Callebaut works out the kinks with the new product.

Pastry chefs that have used ruby chocolate have described it as “sweet and tart” at the same time, with a “unique berry fruitiness” and smooth texture. Chef Gutierrez said ruby chocolate naturally has a higher Ph level than other chocolates, which makes for a more challenging base for desserts. 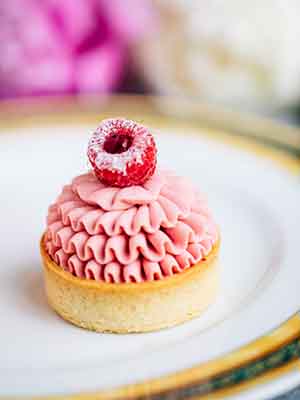 Right: Ruby Chocolate Bar at The Lobby, The Peninsula, Chicago.

Barry Callebaut (somewhat dramatically) describes the flavor of ruby chocolate as, “a sensual tango of berry-fruitiness and luscious smoothness. It’s not bitter, milky or sweet, but ruby.”

Where can I find ruby chocolate?

While Callebaut begins to market ruby chocolate to Americans, the product has exploded in popularity in overseas, particularly in the Asia Pacific region, where it has been adapted by Nestle for use in making ruby KitKat products.

Although ruby chocolate is still brand-new in America, it appears to be taking off in hotel chocolate shops and restaurants. While Gutierrez used ruby chocolate as the star of his popup candy shop at Virgin Hotels Chicago, other hotels and resorts have caught on.

Executive sous pastry chef Nu Morakotjantachote has introduced the rosy-hued chocolate to his menu at the Chocolate Bar in the lobby at the Peninsula Hotel in Chicago. The $40 per person weekend chocolate buffet features “one to two bite delicacies” for hotel guests, and the ruby selection includes ruby chocolate bark, raspberry and ruby macaron, ruby rose pavlova and ruby and pomegranate verrine (layered dessert shot).

“We find it important to stay on top of culinary trends and always strive to bring the most unique experiences to our guests and visitors,” chef Morakotjantachote said. “The uniqueness and exclusivity of ruby allowed our culinary team to truly demonstrate their creativity.”

“Ruby chocolate is a beautiful pale pink that lends well to Valentine’s Day and a dessert colored with browns and reds,” Roed said. “Also, the dessert is fairly sweet with white chocolate mousse and dark chocolate ganache so having that hit of bright citrus-like punch from the ruby chocolate will provide great balance.”