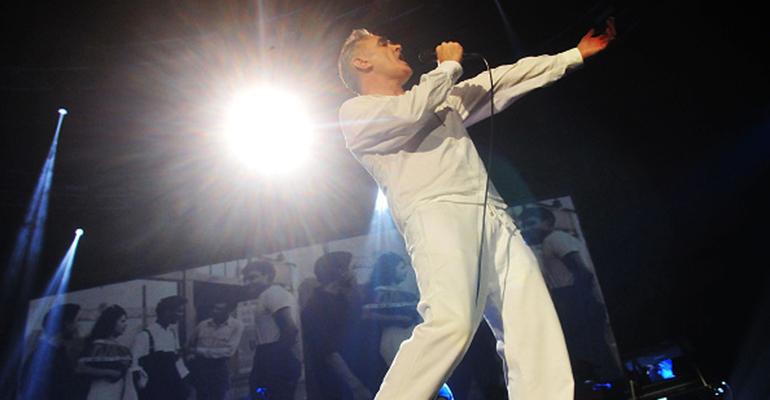 For two nights only, meatless menus will be offered during the outspoken star’s concerts

The man who released an album in 1985 called “Meat is Murder” with his band The Smiths will get a vegetarian tribute in his honor at his next concert at the Hollywood Bowl in Los Angeles.

Morrissey, also known as “The Pope of Mope,” a beloved rockstar who makes existential pain sound amazing, is a longtime animal rights activist. He’s never made a secret of his disdain for meat.

“Nobody can possibly be so hungry that they need to take a life in order to feel satisfied,” Morrissey wrote in his 2013 autobiography. “They don’t after all, take a human life, so why take the life of an animal?”

During his upcoming two-night stand, on Nov. 10 and 11, Morrissey will no doubt be pleased to see that award-winning California chef Suzanne Goin and her business partner, Caroline Styne, have worked with the Sodexo-managed Hollywood Bowl to turn the entire foodservice operation completely vegetarian for the first time ever.

Here are highlights of the Morrissey menu:

The Street Foods & Snacks stations, which always pay tribute to local Cali eats, will feature non-meat versions of all their greatest hits, such as tacos with cauliflower and tahini yogurt, or with potatoes, raja and cilantro. The hot dogs will be all-vegetarian with toppings of avocado crème and pickled onions.

Supper in Your Seat and Picnic Boxes are regular options from the Hollywood Bowl, available for pre-order online. Three-course Supper in Your Seat meals during the Morrissey concert will include pasta with smoked tomatoes, kale pesto and breadcrumbs; polenta with wild mushrooms, swiss chard, mascarpone and gremolata; and a vegetarian Moroccan feast with hummus and salads. The Picnic Boxes will be bursting with grilled chimichurri veggies, farro with winter squash and salad, cooked Romano beans with ricotta toast and almonds, and charred veggies with labneh and harissa.

The backyard: This concept, centered around two wood-burning grills, is gearing up for the Morrissey nights with soft polenta, asparagus and fried eggs; marinated tofu with shaved bok choy salad and lemon grass sambal; grilled veggies similar to those in the picnic baskets; and lots of veggie appetizers and sides.

The Wine bar by a.o.c., a spinoff of the popular LA wine bar, will offer a special plant-forward farmer’s plate with roasted veggies, muhammara, chickpea purée and burrata, along with Turkish “meat” balls and asparagus and Parmesan pudding.