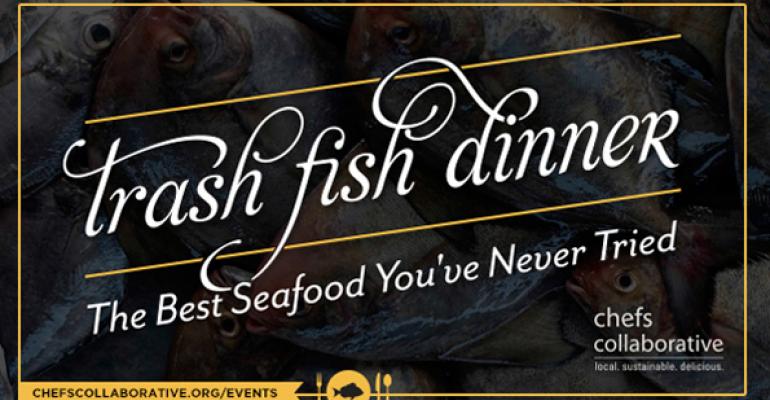 Now that chefs who specialize in nose-to-tail cooking have found a market for one sort of once nearly-taboo foodstuffs, could it be time for what are politely termed “underutilized” seafood species to finally get their due? We’ll find out beginning this month when Chicago-area star chefs and Prairie Grass Café chef/owners Sarah Stegner and George Bumbaris begin to offer “trash fish”—their term, not ours—on Monday and Tuesdays nights.

The high-minded idea behind this menuing experiment is simply this: There are many species of fish that, while plentiful, are not popular. If restaurants can create a market for these fish, rather than concentrating on the relative handful of species that dominate almost every U.S. restaurant menu, seafood sustainability could become a reality. Currently, some of the most popular species are overfished and their stocks are dwindling.

“By eating lesser known trash fish, not only are you able to help the ecosystem,” Stegner says. “You’ll have the opportunity to learn about how delicious the varieties are.”

Let’s hope so. Talented chefs like Stegner and Bumbaris have the skills to make these lesser species taste good. The problem has always been getting people to order them off the menu. Now that adventurous foodies have shown they’re willing to try almost anything, it seems like a good time for a trash fish experiment.

Prairie Grass Café will start off by offering three “less popular” varieties. Stegner and Bumbaris will be serving blue fish, said to taste sweet and have a similar texture to bass; speckled trout, billed as being akin to lake trout; and king fish, described as “appetizing, meaty and more.”

They’re taking it one step further by participating in a May 20 Chefs Collaborative event in Chicago. Chefs including North Pond’s Bruce Sherman, Trattoria No. 10’s Laura Piper and Blackbird’s Paul Kahan will prepare an eight-course, family-style “Trash Fish Dinner.” Big Jones restaurant will be the site. Tickets are $125 at www.chefscollaborative.org/events.

It’s an interesting approach on several levels. Sustainability issues aside, less-popular seafood species cost dramatically less than more favored ones. Restaurants that become adept at serving species of fish for which there is little or no commercial market will enjoy rock-bottom food costs.

Let’s hope that at some point, all this culinary firepower gets trained on Asian carp. That’s the invasive species that threatens to take over the Great Lakes, driving out other popular sport and commercially harvested species and destroying a $7 billion-a-year fishery. Asian carp are confined to the Mississippi River system at the moment. But they’ve been spotted in the Chicago Sanitary and Ship Canal, a manmade waterway that lies between the Illinois River, a tributary of the Mississippi, and Lake Michigan. Great Lakes state and federal officials are working hard to keep them from getting any closer.

The easiest way to control Asian carp would be for people to harvest and eat them. Why they mostly don’t: bones. You’re not going to serve this fish as a fillet because there are way too many bones in too many places to remove. Most chefs cook the fish first, then pick off the flesh.

That’s why we’re wondering if maybe the crew at Chef’s Collaborative could tackle the Asian carp at one of its upcoming trash fish dinners. This species is so prolific it has already withstood a full-fledged federal assault and is still thriving. If chefs could figure out how to make Asian carp palatable, a vast supply of inexpensive seafood would suddenly be at hand. If Chicago chefs want to tap into an underused source of seafood that’s both wildly prolific and yet local—Illinois officials say dangerously local—the Asian carp awaits.