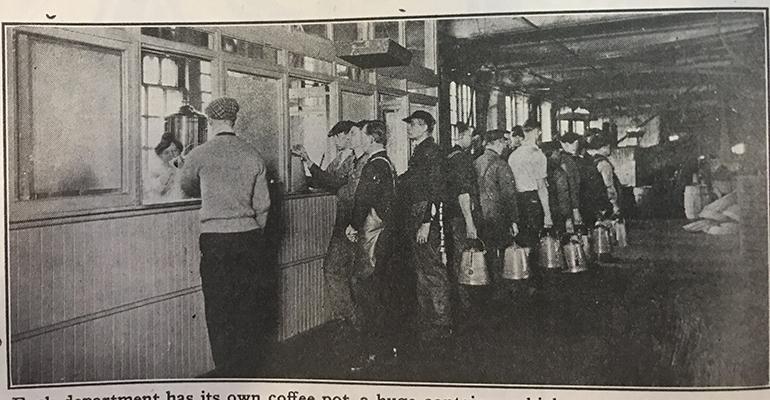 Looking back at 100 years of restaurant menus

Farm-to-table cooking, burgers blended with produce, regional cooking, more healthful food, a globalized pantry and brewing the perfect cup of coffee might all be conversations that restaurant operators are having now about their restaurant menus.

But these have also been topics for the past century. So have automation, making full use of fixed costs and the growing importance of delivery.

They all have been featured regularly on the pages of Restaurant Hospitality, and its predecessor, American Restaurant Magazine, since it was founded 100 years ago.

In 1921, the magazine marveled at the opening of a “self-serve” soda fountain in a restaurant in Columbus, Ohio. The writers didn’t say how it worked, exactly, but they did say it was a money-saver: “The new fountain, which does away with the human element, has been installed in a High street [commercial street] restaurant, opposite the state house,” they wrote. “Simultaneously with the installation of this automatic dispenser came the announcement of reduced prices on all drinks and creams.”

Soft drinks were becoming increasingly important at the time, what with Prohibition having been enacted in 1920. So was coffee. It was so important, in fact, that American Restaurant started a monthly series on the topic. 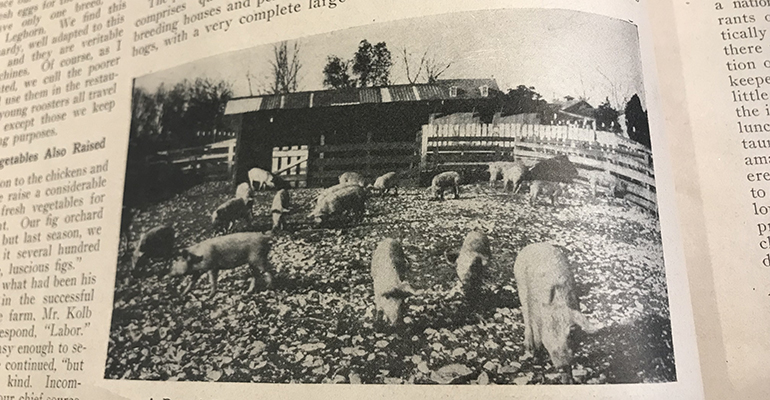 Photo: The farm that supplied Kolb’s Restaurant in New Orleans

“There is the right and wrong way of making coffee,” it began. “Our investigations convince us that there is a good deal of room for improvement in this art and that 70 percent of the poor coffee served is not due to the grade of coffee used, but to lack of knowledge in the making.”

It seems that most coffee was boiled at the time. “This method is dangerous because almost universally the coffee is boiled too long and hence the tannin is brought out and you get a disagreeable, unpalatable drink,” the magazine said.

Percolation was coming into vogue, however, as was steeping. But American Restaurant advocated for the pour-over method.

They didn’t call it that, of course; they called it “filtration,” and contrary to modern advocates of cold-brew, insisted that it be done as quickly as possible, pouring water “boiling at a gallup” over the coffee and through the filter. The boiling coffee was to be poured back through the grounds repeatedly “until the coffee is of a deep blood red.”

The writers believed that those disagreeable tannins would be extracted at any temperature, but only hot water could extract flavor and caffeine.

Modern baristas disagree, and would generally be appalled by that approach. However, they would probably be fascinated by the treatment of cream, which was very fresh and to be kept at room temperature.

“In cold weather remember [cream] is likely to come to you chilled and when it is used in your coffee, it will lack in richness and give you a poor cup of coffee,” the magazine said.

In 1922, restaurants were featured for characteristics they’d still be featured for today. A writer toured the farm on the outskirts of New Orleans that Kolb’s restaurant owned, and which had “runs of White Leghorn chickens … a green field of ankle-deep rye … a wonderful fall vegetable garden [and a] hog division, where could be seen Hampshire and Cheshire Whites in various stages of growth from small pig at the mother’s side to large porkers, two years old.”

Many restaurateurs in 2019 are interested in full-cycle farming, in which the produce from farms returns to them as compost. The 1922 restaurateur Conrad Kolb was on the same page.

“We have found that the farm serves the double purpose of furnishing fresh eggs, poultry and young pigs for the restaurant [as well as vegetables] and providing us also with a sure and profitable way of disposing of refuse of the kitchen of the restaurant,” he said.

His biggest challenge might also sound familiar: It was finding competent labor.

With World War II came a patriotic duty for conservation. So in January of 1942, a scant month after Pearl Harbor was bombed and the United States entered the war, Dorothy Penn of the American Restaurant Institute called for simple dishes like Fried Mush with Pineapple Ring and Sausage.

“Good yellow cornmeal mush made and poured into molds to solidify overnight is cut, dipped in egg and milk, bread crumbs and fried in deep fat,” she said. “When served with braised pineapple ring, broiled link sausage and maple syrup it makes a delicious dish. Our customers request it so consistently that it cannot be omitted from the menu for any length of time.” 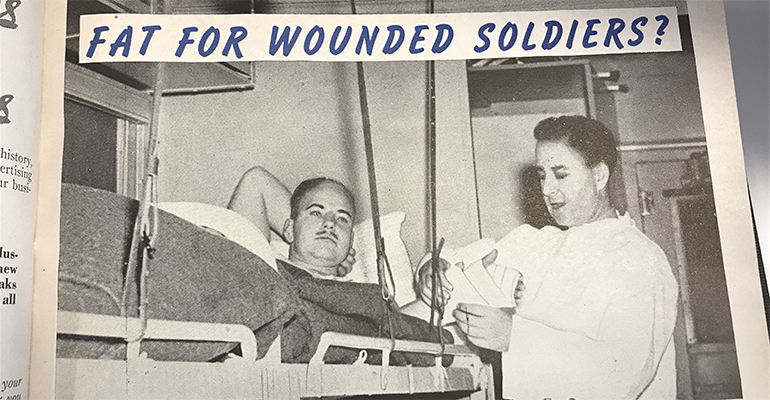 Photo: From an ad for a booklet on conserving oil

Penn apparently didn’t know yet that “deep fat” was about to be a non-starter as cooking oil was rationed during the war. Fat was in demand for making “the amazing new sulfa drugs,” ammunition, gas mask containers “and many other important wartime necessities,” according to a 1944 ad from Wesson Oil & Snowdrift Sales Co., which was offering a booklet titled “101 Practical Ways to Save Fats and Oils.”

So the December 1944 issue had a feature by Jessie Alice Cline on beef stew, “since there’s plenty of lean, nonrationed beef available — perfect for stew.” 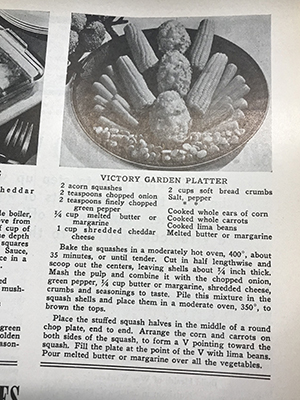 Americans also were indulging in more sausages and “variety meats,” which is how organ meats including liver, kidneys, brain and sweetbread were referred to. Conservation-conscious wartime operators were advised to cook the organs at low temperature to prevent shrinkage, and to save trim for making gravies and to make blander foods such as cereals and vegetables more palatable.

By the 1950s, it was back to business, but restaurants were struggling as customers were spending all their time at home engaged in social media and watching Netflix — or rather its mid-century equivalents that prompted a 1955 cover story in takeout, 10 years into the Baby Boom.

“Declines in dinner hour volume due to the advent of television, to the increase in the number of families with young children, to the residential movement to the suburbs and to various other factors have been successfully met in instance after instance by restaurants doing a job in the planning, preparation and merchandising of take home foods,” according to the introduction to the story. 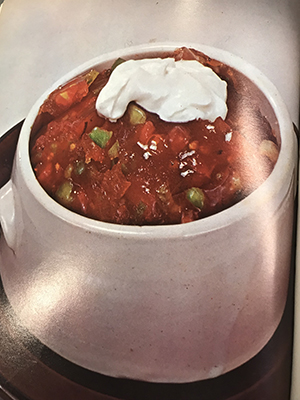 Meanwhile, restaurants were seeking to maximize the return on their fixed costs by encouraging customers to visit between meals, thus fostering the invention of the coffee break.

For Korean chicken — “an example of that country’s practice of marinating chicken” — the meat is marinated in soy sauce, dry sherry, garlic powder, ginger powder, MSG, sugar, green onion and sesame oil or seeds. It was then broiled.

Iranian Chicken Soraya was a breaded roulade stuffed with dried apricot and baked.

Chicken Tandoor was marinated overnight in onion, green pepper, tomato, salt, curry powder, coriander, cumin, turmeric, garlic powder, black pepper and butter. Then it was baked. In actual tandoori chicken, yogurt would be in the marinade, but apparently the popularization of that dairy product — all the rage in the 1970s, was still a few years off.

Intriguing recipes of jellied gazpacho, and a chilled sour cherry soup with autumn spices and cream, were feature that year, too.

But by 1969, it could be argued that American cuisine went off the rails a bit. That year Restaurant Hospitality featured a recipe of Lobster Thermidor with blue cheese. It also advocated sprinkling fish fillets with dried parsley, salt and pepper, wrapping them around frozen French fries, standing them up in a buttered pan, drenching them in tomato sauce and baking them at 350 degrees for an hour.

By 1978, Americans were saying they wanted to eat more healthfully.

Richard Planck wrote: “…We’re at the beginning of an era of change, an era of natural eating that will see diet-conscious menus available across the nation in operations like 40 Carrots, the Weight Watcher’s Restaurant, in special promotions generated by foodservice chains like Marriott, or for places like yours.

Dishes such as low-sodium lemon pasta with trout were featured, as well as a vegetarian mushroom cutlet made with ground raw and chopped cooked mushrooms, carrots, celery, onions, parsnips, green beans, soy protein granules, lentils and eggs, all seasoned with black pepper, but no salt. It was baked and served with a sauce of mushrooms and tomatoes thickened with cornstarch and seasoned with salt and pepper.

People weren’t calling themselves “flexitarians,” but they were eating that way, as a feature on vegetables observed:

“Vegetable as entrée, once a rare occurrence, now is popping up regularly on menus,”
it said, adding that it appealed “to the growing army of diners who either do not, cannot, or choose not on a particular occasion to eat meat.”

An example from One Nation Restaurant in Columbus, Ohio, was the Homestead Vegetable Bake, for which “broccoli, zucchini, carrots and corn are baked in a creamy sauce and come with a salad.”

A January 1987 column by publisher Daniel Ramella perfectly underscores the cyclical nature of so many trends as he made his predictions for the coming year, which included barbecue, “ethnic anything” and coolers (which were remarkably similar to what we now call a spritz).

“By the end of this year,” he said, “operators who somehow have incorporated take out and home delivery services into their operations will wonder why it took them so long to do it.”