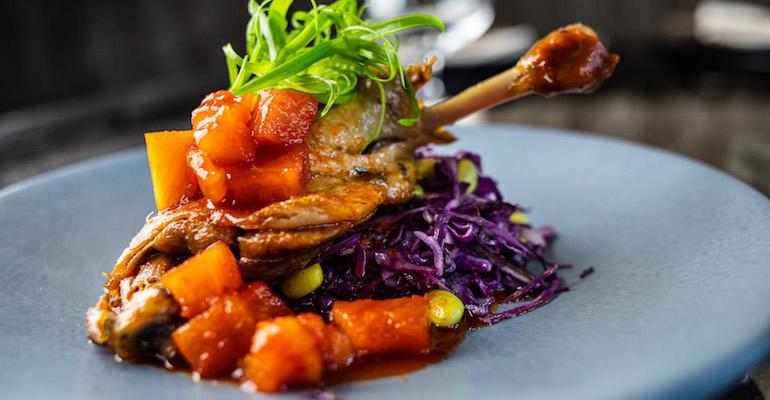 This versatile dark-meat bird is flying onto menus

Chicken may be an everyday menu favorite and turkey the star around Thanksgiving, but there’s another bird flying onto restaurant menus: duck.

Though the highly versatile waterfowl is prized and used in cuisines around the globe, here in the U.S., duck most commonly appears on menus at Chinese restaurants in the form of Peking Duck, the iconic dish of roasted duck with crispy skin served with sweet hoisin and spring pancakes.

Yet, duck is increasingly showing up on all manner of independent restaurant menus, thanks to a growing number of chefs who love it for its fatty undercoat, rich dark meat and its ability to pair well with a variety of ingredients and stand up to the boldest of flavors. 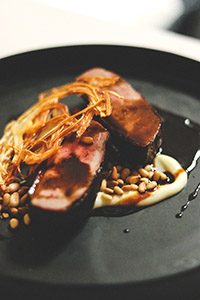 “For this dish we wanted to make sure the duck is the centerpiece but that everything around it is still interesting and complimentary,” said Sawyer.

"White chocolate and parsnip is one of those weird flavor combos that came out of Nouvelle cuisine that still makes sense.”

The dish starts with duck breast seasoned with salt and cooked on a wood-fired oven at about 800 degrees Fahrenheit, where Sawyer says “it almost plumps up like a balloon.” He serves it with parsnip two ways — a tuille-like presentation and with white chocolate — pine nuts, and a red wine demi-glace to add some acidity and tannin and cut through the duck fat.

“Since Animae is Asian-inspired and duck is a large part of Asian cuisine, whether Japanese or Chinese, it’s a natural fit for our menu,” said Executive Chef and Partner Joe Magnanelli. “I also love duck, it’s one of my favorite proteins.”

Magnanelli uses a traditional French-style method to prepare the duck leg confit adding Asian flavors, such as cilantro, kaffir limes, green peppercorns and coriander, into the salt and sugar curing mixture. He also adds star anise and cinnamon sticks into the duck fat while the legs cook, and then serves it with shaved red cabbage and chunks of pineapple tossed in Korean chili paste glaze. 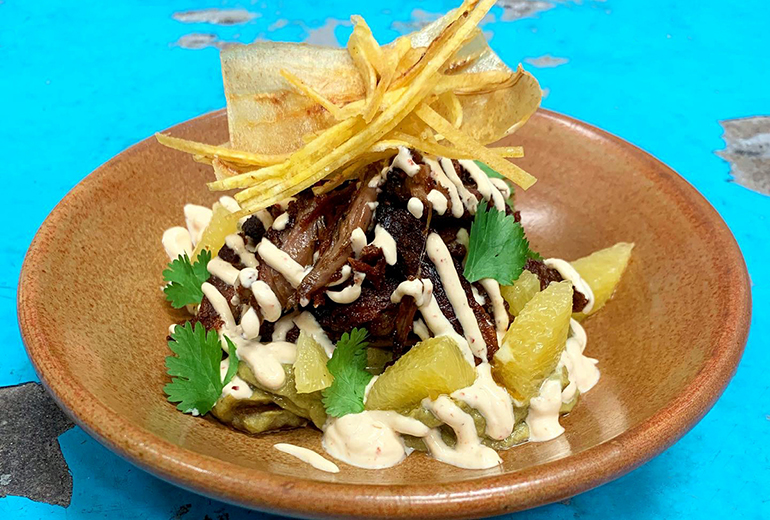 A fresh take on Duck Carnitas at Cosmica.

Duck is also a good match for the smoky heat and bright acidity of Mexican cuisine. It appears on about 2% of Mexican menus, including Cósmica, a new Mexican street food eatery and bar in The Revolution Hotel in Boston that is serving a creative spin on the classic duck carnitas with mole verde, chili de árbol crema, pickled onions and fried plantains.

“While duck carnitas are not new, I think the way we are approaching this dish and the flavor profile is certainly our own take on the dish,” said Cósmica Chef Colton Coburn-Wood.

For Coburn-Wood’s version, 24-hour sliced and rubbed duck is confited, then layered on a green mole sauce and topped with the crema, fresh oranges and fried plantains.

“You have the richness of the confit duck, an earthy overtone with the mole and cooked plantains coupled with the brightness from the crema and acid from the oranges creating what we feel is a very well-balanced dish,” said Coburn-Wood.

Similarly, duck appears on about 2% of Southern menus, such as at Eunice, a Cajun-Creole brasserie-style restaurant in Houston, where Executive Chef Drake Leonards serves his family recipe Cajun Duck Poppers with double smoked bacon and jalapenos.

“This starter is inspired by every traditional duck camp, jalapeno duck popper I have ever encountered,” said Leonards. “It is one of our best-selling dishes.”

Typically served with duck breast and a whole jalapeno, Leonards uses Rohan ducks, a heritage breed known for its tender, rosy meat and thin skin, then pickles the peppers to take some of the spice away and adds pressed cane juice for a touch of sweetness.

Duck is expected to keep flying onto menus. Over the next four years, Datassential predicts duck’s growth to outperform 66 percent of all other foods, beverages and other ingredients.

That positive prediction is already playing out at Friday, Saturday, Sunday in Philadelphia. The New American restaurant’s Dry Aged Duck for two with the duck breast and confit duck leg ($63) is so craveable that bartender Paul Williams recently said it often sells out by 5:30 p.m. — just 30 minutes after the dining room opens.