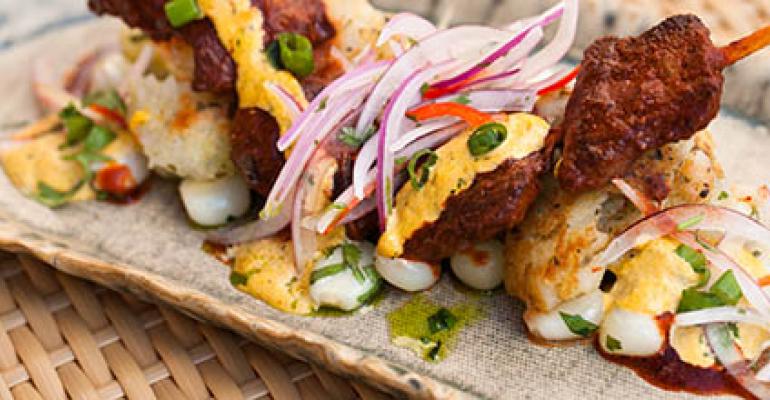 Corn: 4 fresh takes on the symbol of summer

The sunny vegetable stars in an elote bowl, Indian street snack and other iterations

Corazón anticuchos
Jesus Delgado, Tanta, Chicago
Price: $12
You notice the big, bold kernels of corn on the corazón anticuchos (beef heart skewers, pictured above) even before you pause to contemplate eating a heart at Tanta, a Peruvian restaurant where the rich culinary world of mountains and rainforest feels accessible and inviting. Dishes like lomo saltado and cebiche in leche de tigre reveal the cuisine’s strong connection to steak, potatoes and seafood. Corn is also a cornerstone of Peruvian food, popping up on several plates at Tanta. Chef Jesus Delgado flies in choclo, a jumbo variety of corn, directly from Peru. “It grows in the Sacred Valley of Cusco, where it’s been grown for thousands of years,” Delgado says. “It’s less sweet and starchier than American corn.” (Photo: Tanta) Chef Dominick Lee of Poitín had an aha moment when he first tried Mexican street corn. “I love the flavors, but also immediately began thinking about what could enhance them,” Lee says. “Bacon, check. Chipotle-infused queso fresco, double check. When I incorporated those two elements, the flavors became that much more amazing.”

This corny new classic is listed under “enhancements” on the menu, alongside modern Southern-global dishes like fried green tomatoes, charred veggies with ricotta and seasonal banchan with house kimchi. “I like to work with corn as an ingredient because it’s representative of both Mexico and the South,” Lee said. As a bonus, this version of elote is forkable, for those moments when you may not want a face full of corn, even though the restaurant prides itself on its laid-back attitude. (Photo: Trevor Gerland) “There’s a genre of Indian street food called bhel that’s kind of a crispy, crunchy salad equivalent, although usually vegetables are limited to cilantro, onion and tomato,” said owner Meherwan Irani. To lighten up the bhel and give it a summery feel, Irani added roasted corn, cucumbers and mint to the traditional base of the salad. “This perfectly captures what happens when east meets west,” he said. (Photo: Chai Pani) Parke Ulrich, executive chef and partner of San Francisco restaurants Waterbar and EPIC Steak, has set out to make Treasure Island a total oasis and new destination with incredible food and a knockout (and rarely seen) view of the city. “A lot of people from San Francisco have never been here,” Ulrich says of the former Naval base, which is in the midst of a renaissance. “No one realizes it’s here as they pass by on the Bay Bridge every day.”

Ulrich hopes to change all that with Mersea, his seafood-forward, casual-comfort restaurant that opened a few months ago. Dishes like tuna ceviche in coconut and lime juice set the tone, and the corn used in this one is Peruvian, which “works for me as a fun textural thing, and people are like, ‘Where is this corn from?’” Ulrich says. “There’s more of a crunch and the inside has an almost chalky texture.” (Photo: Sarah Chorey)