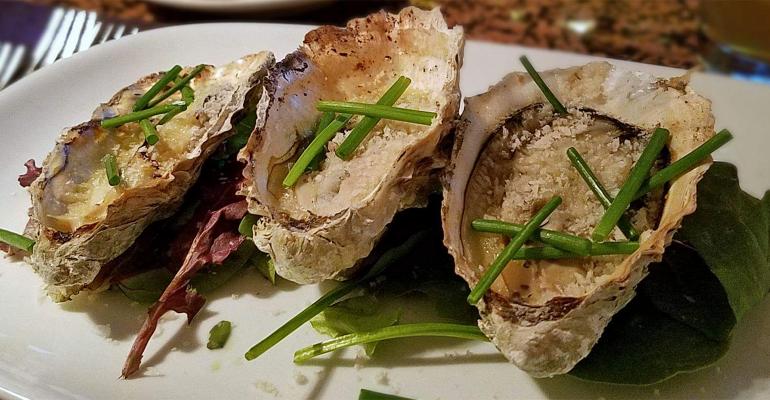 Chefs are sweet on housemade vinegars

Restaurants waste not by turning leftover or overripe produce into vinegar

When his assistant general manager gifted him a bucket of crab apples a few months ago, chef Drew Tobin made them into a crab-apple vinaigrette to go with Goose Point oysters on the menu at The Million Dollar Cowboy Steakhouse in Jackson Hole, Wyo.

“We didn't know what to do with them, so first we made mead,” Tobin said. “Then I got the funky idea to go a step further and turn it into vinegar for a vinaigrette.”

Tobin is one of a growing number of chefs transforming leftover, overripe or, in this case, randomly acquired ingredients into vinegars and using them to add funk and flavor to appetizers, entrées and even desserts.

“We try to be as resourceful and waste-free as possible in our kitchen,” said Nick Balla, executive chef and co-owner of Duna, a Central European-inspired restaurant in San Francisco. “That means scraps such as apple skins and cores or the remains of wine become the base of vinegars.” Balla makes a variety of vinegars in-house, including apple and pear cider, blood orange and malt. He likes to use them in everything from salads and soups to desserts and shrubs.

Currently on Balla’s menu is the Winter Sofia Salad, made with feta, beets, kohlrabi, pickled green beans, marjoram and his red wine vinegar. Housemade apple vinegar is used to make a Quince and Apple Tart.

“Cooking this way also means we get to explore a range of flavors from one ingredient,” he said.

At Bastion in Nashville, Tenn., a 24-seat restaurant serving an ever-evolving five-course à la carte menu, the culinary team recently turned a shipment of end-of-season muscadine, a thick-skinned variety of grapes native to the South, into vinegar.

“One of our farmers gave us some muscadine from the end of the season — it was so late in the season and they were so overripe that I chose to turn them into a vinegar instead of utilizing them in a dish right away,” said chef de cuisine Brian Baxter.

The vinegar is currently being used in the Tilefish and Country Ham, a dish made with dandelion greens and dehydrated capers. The muscadine vinegar is used to balance out the saltiness, bitterness and sweetness of the dish.

Other vinegars made at Bastion include kiwi, onion, persimmon and local passion fruit, also called maypop. “In order for us to impart special flavors, particularly in vinegar form, it's easier and often cheaper to make them ourselves, particularly with Southern ingredients like the maypop and muscadine,” Baxter said.

For years, chef Travis Milton of the soon-to-open Milton’s at the Western Front Hotel in St. Paul, Va., has been making Cheerwine Vinegar Pie, once a go-to Southern dessert when ingredients were scarce. Inspired by the food of his Appalachian upbringing, Milton makes Cheerwine vinegar by fermenting Cheerwine, a cheap, regional cherry soda.

“I started making vinegar pie because it's a big part of Appalachia cuisine,” Milton said. “It's a part of Midwest cuisine, too, so in areas where citrus was not readily available, in the past cooks would substitute vinegars. With apples being such a big part of Appalachian cuisine, most cooks had apple cider vinegar going at all times. So you'd substitute apple cider vinegar for lemon in desserts like a chess pie, which is essentially what the Cheerwine Vinegar Pie I make is.”

During his time as a chef at Comfort in Richmond, Va., Milton became known for transforming all manner of local ingredients into vinegars, including tomatoes, honeydew melon and greens. He said the Cheerwine pie, which was also on the menu at Comfort, is likely to make an appearance at Milton’s, as well as his other upcoming restaurants, Shovel & Pick and Simply Grand, both in Bristol, Va.

Like ingredients fermenting in a bottle, interest in artisanal vinegar is expected to grow.

According to Datassential’s FoodBytes trend report in December 2017, vinegar is among a number of “funky” ingredients, flavors and descriptors predicted to grow on menus in the coming year.

“Winter is very difficult to find fruit worthy of making vinegars,” Tobin said. “In the spring and into the summer, when we have fresh fruits and high-quality products, I plan to mess around with some fresh fruit vinegars and such.”