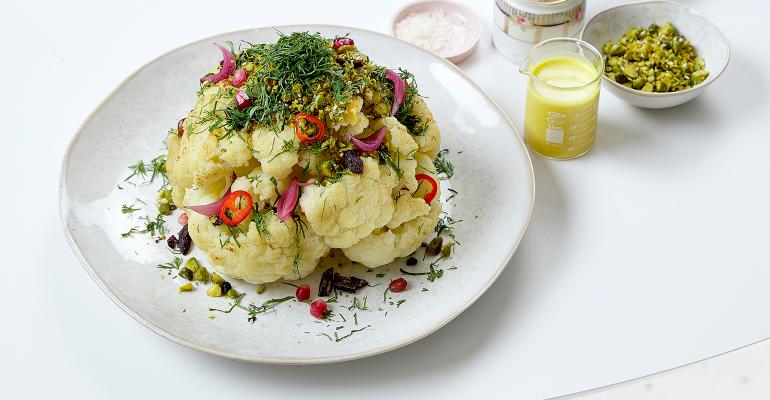 Cauliflower got a bad rap for many years as a bland and sometimes stinky cruciferous vegetable.

But lately, cauliflower has been popping up everywhere, partly due to the mainstreaming of specialty diets like paleo, which eschew refined carbs like rice and bread, and to the fickleness and lightning speed of food trends today.

It started with cauliflower rice, or the vegetable’s florets pulsed in a food processor until reduced to the size of rice grains. Those seeking to eat fewer carbs could swap cauliflower rice for standard rice in dishes from fried rice to risotto.

Cauliflower rice is tame compared with what is being dished up now. Cauliflower is pulverized and reassembled as pizza crust. It’s being tossed into smoothies as a banana substitute. It’s smothered in a spicy sauce and dubbed “Buffalo cauliflower.” And high-end restaurants like Jean-Georges Vongerichten’s abcV in New York City serve whole, roasted cauliflower as a center-of-the-plate entrée.

Despite cauliflower’s seeming ubiquity, per capita consumption fell slightly in 2016, to 1.5 pounds, compared with 1.7 pounds the previous year, according to the USDA National Agricultural Statistics Service. Still, its year-round availability, affordability and a bounce from trend buzz likely means more cauliflower innovation, for now.