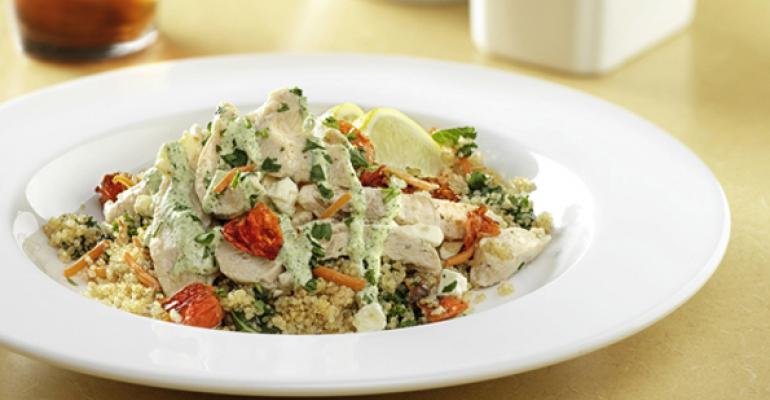 Can restaurants crack the superfood code?

According to everyone from nutritionists to weightlifters to life extension fanatics to hypochondriacs, superfoods are the best things people can put into their bodies. But taste and texture issues make it difficult for restaurants to feature superfoods as ingredients. A handful of independents have been working on a solution, but now 100-unit First Watch is taking a crack at selling superfood-based items in a casual dining setting.

Operators already know there’s nothing like a superfood ingredient to add a healthy halo to many dishes. Currently popular methods include sprinkling pomegranate seeds on a dish or using kale as a side or salad ingredient. Dark chocolate, of course, has long been a core ingredient on most dessert menus, as are several types of berries.

But other than a handful of items like these, superfoods remain outside the mainstream of popular restaurant items, despite an ever-growing awareness on the part of customers that eating superfoods is a great idea.

Independent restaurants are working to bridge this gap, the idea being there’s a huge market for superfood-based dishes if only restaurants could figure out how to make them appealing.  One going that route now is Boston restaurant Abby Park, whose Super Natural Menu incorporates a superfood item or two in every dish.

Here’s a sample of its current lineup:

It’s a well-thought-out list that meets both superfood fans and nonfans halfway. Which is the same thing breakfast, brunch and lunch chain First Watch is trying to do by adding a superfood component to the seasonal menu it debuted in late January.

“With the New Year upon us, we wanted to offer our guests delicious, healthy options that will help jump start their resolutions,” says First Watch chief marketing officer Chris Tomasso.

First Watch has categorized two items on this menu as superfood-driven.

• Broccoli and Turkey Frittata, an open-faced omelet with house-roasted broccoli, turkey and cheddar and Parmesan cheeses served with dressed greens and multigrain toast, $7.99.

Neither dish is a pure play on superfoods, but both rely on the “stealthy healthy” approach that often plays well with a chain restaurant audience.

“These two items are filled with superfoods rich in protein, fiber, iron, de-toxins and necessary vitamins to sustain a healthy lifestyle,” First Watch says. “Two of the ingredients, quinoa and kale, have become more popular in recent years. Quinoa’s notoriety will only grow in 2013, as the United Nations has named this year as the International Year of Quinoa.”

Many 2013 trend lists predict that superfoods will take off in restaurants this year. How restaurants like Abby Park and First Watch do with their superfoods initiatives will let us know if the forecasters were right.