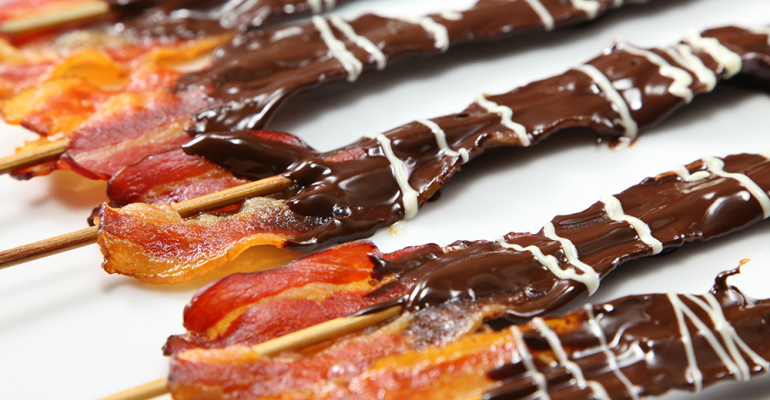 Americans are still in love with bacon

Pork belly sizzles as finger food, in sandwiches, with cocktails

The English novelist and travel writer Fanny Trollope registered astonishment that Americans consume “an extraordinary quantity of bacon,” an observation that appeared in her “Domestic Manners of the Americans” in 1832. It’s hard to imagine what she would think of Americans’ continuing — and increasing — love for sizzling pork belly nearly two centuries later. That irresistible blend of savory and salty has made bacon our number-one favorite meat, according to researchers at Datassential.

While sweet heat is a natural pairing for bacon, other chefs are leaning into the fat factor to counterbalance the burn.  For example, the grilled bacon appetizer at Quality Meats in New York City pairs peanut butter with jalapeño, and the applewood smoked bacon on the Munchies menu at two-unit Uncle Jack’s Meat House marries bacon with homemade peanut butter and a chipotle-maple glaze. 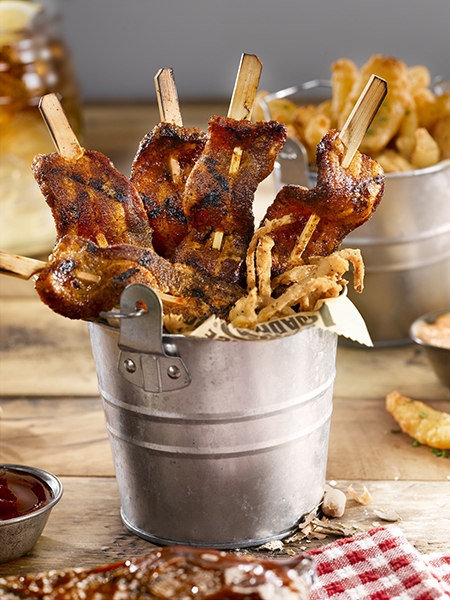 Still other restaurateurs rely on creative presentation to teach an old pig new tricks. In answer to patron demand, Logan’s Roadhouse has brought back its popular Bacon on a Stick starter, in which bacon slices are threaded on sticks and arranged in an aluminum bucket along with crispy fried onion rings for a hands-on, down-home presentation. Three-unit Bacon Social House operates in Denver and Minneapolis and wins praise for its bacon-forward items like the signature bacon flight appetizer that offers six flavors of the “best bacon available in the US,” and is served with a pair of shears for sharing.

Show-stopping sandwich toppers. Chains bring home the bacon at all hours of the day, as with Dunkin’s Brown Sugar Chipotle Breakfast Sandwich or the Everything Bacon Sensation at Snooze an A.M. Eatery. The latter starts with an everything-spice brioche bun brushed with green goddess cream cheese, then crowned with egg, bacon and Citronette-dressed arugula.

Lunch patrons can get their bacon fix with specialties like Bacon Me Happy Burger at Uno Pizzeria & Grill, which provides a double portion of brown-sugar and black-pepper crusted bacon, or the B’B’B’ Bacon Burger at Slater’s 50/50, in which the chain’s proprietary 50/50 beef-and-bacon blend burger goes whole hog with bacon American cheese, thick-cut bacon, an egg, and bacon island dressing. And Wendy’s invites carnivores to indulge with long-running favorite Baconator, topped with double patties separated by six slices of applewood-smoked bacon.

On a related note, Pizza Hut scored with Bacon Stuffed Crust Pizza a couple of years back. The limited-time addition to the popular Stuffed Crust line featured a blend of three cheeses and pieces of bacon. Meanwhile, MattiTaco, an independent taqueria operating on Long Island, attracts patrons with a BLT Bacon-Lobster Taco that combines lobster salad with crispy smoked bacon. 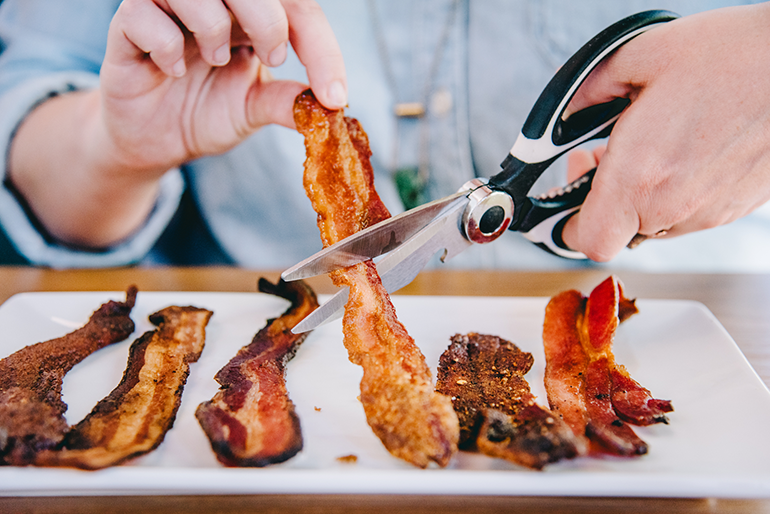 Imbibers can pig out, too. Bartenders are using bacon to perk up their cocktail classics, as with Lazy Dog Restaurant & Bar’s Smoked Maple Bacon Old Fashioned with maple syrup and bacon candy. Coalition Food and Beverage, an independent in the Atlanta suburbs, tells patrons “it’s Bloody Mary o’clock” and garnishes the pick-me-up with sorghum-glazed bacon. At Bacon Bros. Public House in Greenville, SC, patrons can sip a BBPH Bacon Mule, Manhattan or Piña Colada, all made with bacon-infused spirits and chased with bacon caramel popcorn as a bar bite.

Looking ahead, there is little sign of bacon displacement. Creative promotions abound, as with California-based Farmer Boys Burgers recent Bacon Intern promotion, which invited one lucky consumer spent the day taste-testing “pork-tacular” items and earning $1,000 for his or her piggy bank.  Bacon substitutes, notably turkey and beef, haven’t moved beyond niche items, and early reports of a plant-based, vegan-friendly bacon from Beyond Foods may widen that niche, but for most American consumers, the proof is in the pig.

Nancy Kruse, president of the Kruse Company, is a menu trends analyst based in Atlanta. As one of LinkedIn’s Top 100 Influencers in the U..S, she blogs regularly on food-related subjects at linkedin.com.