Vegan goes Viral. Plant-based options are more plentiful and delicious than ever before and chefs of all genres are devoting more attention to vegetables, the report states. And, don’t call it plant-based. “It isn’t just about animal welfare, but about what’s good for the environment and what’s good for us, without sacrificing flavor or presentation,” according to the 2020 report.

“Vegan entrées are now a staple on menus. We have a rotating vegan dish that sells often times better than some of our other animal protein dishes. And we’re finding that folks who may not identify as plant-based only eaters are ordering it as well,” said Stacy Jed, Co-Owner of Bluestem Brasserie in San Francisco.

Independent restaurants are not the only concepts dedicating space on menus for vegan entrees. Portland-based Salt & Straw, a Nation’s Restaurant News 2017 Breakout Brand,  creates a vegan series of ice cream every January. It also offers one new vegan flavor every month. Shown: Blood Orange Cranberry Sauce Ice Cream made with coconut cream base.

“The Lao Food Movement is growing and for good reason - the food is bright, herbal, and delicious,” the report states. “Building on the popularity of Northern Thai cuisine, expect spicy meat salads (larb), lots of fresh herbs, simple grilled meats and fish, and plenty of sticky rice.”

What not to expect? Coconut milk and sweet flavors found in Thai cooking.

Dish of the Year, Porridge:
Sqirl

Chef are elevating this humble breakfast dish and its “worth the taste,” af&co. states. Like in the fabled Goldilocks story, porridge comes in all styles: Portuguese papas, Japanese okayu, Chinese congee or jook, Filipino arroz caldo, Vietnamese Chao Ga, Scandinavian rice porridge, and old-fashioned Quaker Oats. “For many chefs, porridge represents a comfort food from home and is an ideal, cost-effective platform for creativity.”

“Fried dough is always in style, and the sugar dusted dough of the original creation is giving inspiration to new and delicious hybrid churro desserts and dishes including waffles, croissants and ice cream sandwiches,” af&co declares.

“Jerusalem bagels aren't bagels at all, but similar to simit, a sesame seed topped Turkish flatbread, with an elongated ring shape. The texture is softer and more bread-like then your basic bagel and it is used more for dipping than for schmearing - traditionally in olive oil and za'atar,” the report states.

The unconventional bagels are large and served with a variety of unexpected dips such as za’atar and olive oil.

Restaurants to watch: Aba in Chicago, shown, Breads Bagelry in Brooklyn and K’Far in Philadelphia.

The trend watchers at af&co. are seeing sourdough turn up in unconventional forms: doughnuts, bagels, pizza, pickles, miso and more. “There’s a greater knowledge and appreciation for the art of sourdough, a traditional way of leavening using fermentation,” the report states. “Health benefits also play a big role in the rise of sourdough - it can make items more easily digestible and also offers nutritional benefits.”

“Whether you call ‘em Sicilian-style or Detroit-style, there’s one thing these comforting pies have in common: they’re square and delicious,” the report states.

“Delivery spending is growing two-three times faster than on-premises restaurant sales and expected to outperform on-site sales next year. The implication? Ghost kitchens, virtual restaurants and cloud kitchens are moving into the spotlight,” the report states.

Restaurants and companies to watch: Fast-casual Souvla SoMa in San Francisco opened their fifth location and first virtual restaurant in San Francisco’s SoMa neighborhood. SushiYaa in Dallas offers a virtual brand available only on Uber Eats called Poke Station. Zuul of New York City joined other rent-a-kitchen commissaries popping up across the U.S. Others include DoorDash Kitchens and Kitchen United.

Af&co points to new apps that are harnessing the power of the gig economy by providing a one-stop place for employers to tap workers in a tight labor market. “Need a dishwasher to fill in tonight? These apps can help you find one quickly,” the report states.

“The food scene in North Carolina is expanding so much that it takes not one city but three to contain it,” the report states. “A wide range of food options include highly-acclaimed bagels, beerhouses, a seafood shack, a temple of tempura, and the foods of Zimbabwe.” 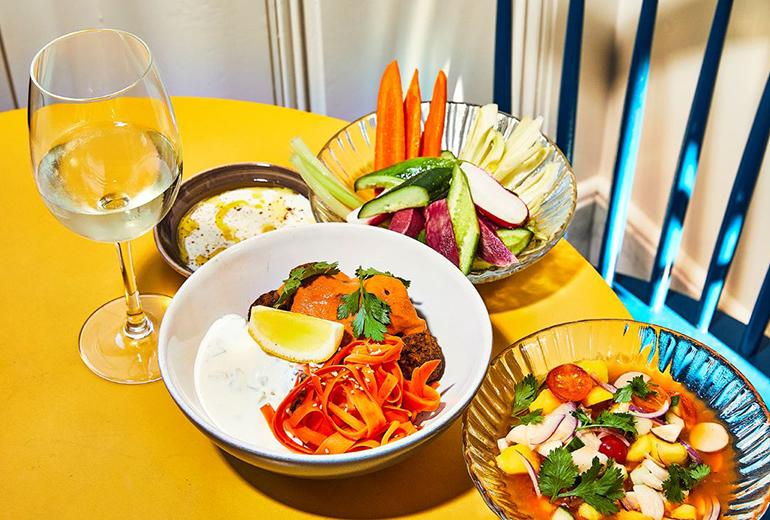