At Halifax in Hoboken, N.J., pastry chef Stuart Marx said, “My style is classic with a twist, so I wanted to do a version of strawberry shortcake with pistachio ice cream. The flavors go perfectly together. The assembly of the cake is three layers of vanilla sponge cake, each layer brushed with a strawberry sauce that has lemon and sugar. The cake also has vanilla whipped cream that we make with fresh vanilla bean, sugar and salt. The cake is coated with graham cracker crumbs and topped with fresh strawberries and the strawberry sauce. There’s a hint of lime zest too. As a garnish, we have roasted pistachios and serve the cake with a scoop of housemade pistachio ice cream.”

“I refused to do dessert pizzas for the longest time,” said chef David DiBari at The Parlor in Westchester, N.Y. “But we use naked pizza doughs to cool down the wood-fired oven and they puff up. About a year ago, I decided to start cutting open the puffed up doughs and putting ice cream inside of them. The combination, which is called a Pizza Ice Cream Sandwich, is sweet, crunchy, chewy, creamy and salty. We sell anywhere from 50 to 75 per week, and also make a cone version for those who can’t eat the whole sandwich.”

The Tropical Tart at Pazzo Ristorante in Portland, Ore., was inspired by an upcoming trip to Hawaii, according to pastry chef Alisha Falkenstein. “I wanted to create a dessert that was refreshing and tropical, and added a pop of color in the gray winter months of Portland,” she said. “The passion fruit lends the perfect tartness, balanced by sweet, toasted meringue and a buttery pastry crust. I chose to use fresh, exotic fruit and bright, edible flowers to play off the flavor of the passion fruit, and to add a whimsical touch.

At BRAVA by Brad Kilgore in Miami, executive pastry chef Soraya Caraccioli-Kilgore puts her own spin on key lime pie with her architectural Key Lime Cube. “Living in Florida, people really love key lime pie, so I wanted to make it cool and architectural,” she said. “The Key Lime Cube contains four citruses — calamansi, key lime, lemon-lime and yuzu. I use African basil in a gel and fresh for an intense basil taste, and I dehydrate and torch merengue to add color and a crisp texture.”

Blood oranges were the inspiration behind the Baked Alaska at Trifecta Tavern in Portland, Ore., according to pastry chef Nicole Spears. “Portland winters are very long and gloomy, and I needed something bright and sweet. Paired with the delicate pistachio sponge cake, it was a no brainier,” Spears said. “Since blood oranges were in the spotlight, I wanted to capture their beauty and flavor in more ways than one. Blood orange sherbet, segmented blood oranges, and candied blood orange garnish we're featured along with the meringue torched to order and salty-and sweet-pistachio pieces that gave it that bright green pop.”

Executive pastry chef of The Fig Tree Restaurant in Charlotte, N.C., Samantha Ward said she loves anything spicy, and created her jalapeno-infused pot de crème with fresh clementine, milk chocolate cremeux and cilantro crunch to fill a void she was seeing. “I don’t see a lot of the creams and spicy notes married together. I wanted to have just enough of the jalapeno flavor and spicy notes to pull through, yet allow the cream to keep it mellow,” she said. “Finding the right balance is key; the sweetness comes through to give you the essence of dessert, but the cilantro and jalapeno pull it in an interesting direction.”

Creating the perfect panna cotta takes a bit of trial and error, according to chef Mel Toledo at Foundation Social Eatery in Atlanta, which offers a different panna cotta each season. “Panna cotta is a dessert that has the ability to morph into different versions, so we offer a different variety each season,” Toledo said. “For the chocolate panna cotta with chocolate-peanut butter ganache, peanut butter cookie crumble and coffee merengue, we wanted something that had classic pairings. Chocolate and peanut butter go perfectly together, and everyone loves coffee with dessert.”

At Area Four in Boston, chef Jeff Pond takes inspiration from Hong Kong-style egg cakes and stuffs waffles with pistachio ice cream and a drizzle of blackberry sauce for his Hong Kong Waffle. “I like the cakey texture of this style of waffle,” Pond said. “I add yeast to the batter for depth of flavor, and malt powder for crispiness. The pistachio ice cream is one of my favorites, but the dish needed some tartness and color for balance, which is where the blackberry sauce came from. I’m planning to change up the sauce with each season.”

Recently named one of the best desserts in the country, the new off-the-menu Birthday Cake Souffle at The Forge in Miami helps bring a bit more cheer to  birthday celebrations. “The inspiration came from eating Funfetti cake with matching frosting as a kid,” said executive chef Julia Doyne. “The dish is meant to bring everyone back to their childhood.”

Gianni's at The Villa, located inside The Villa Casa Casuarina (formerly the Versace mansion) in Miami Beach serves a Triple Chocolate Mouse topped with an ounce of gold, according to executive chef Thomas Stewart, who collaborated with Gianni’s executive pastry chef Mikel Pichs to create the dessert last year. “There’s zero sugar added to the dessert, which contains our pastry chef’s three favorite chocolates, red chocolate on the outside, and an ounce of gold on top,” Stewart said. “It’s more of a European-style palate cleanser. The chocolates are layered, with a chocolate walnut brownie on the very bottom, and then a layer of white chocolate, milk chocolate in the middle, and dark on top.” 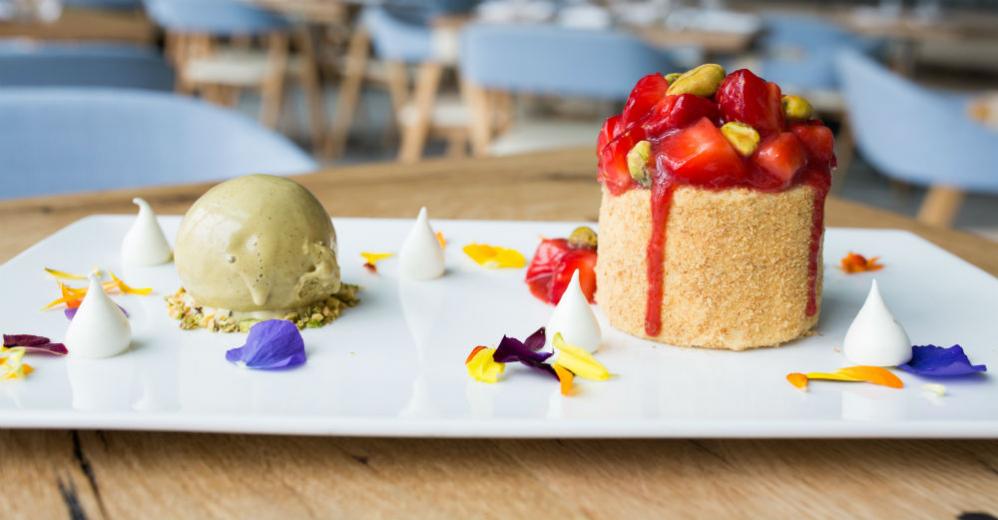