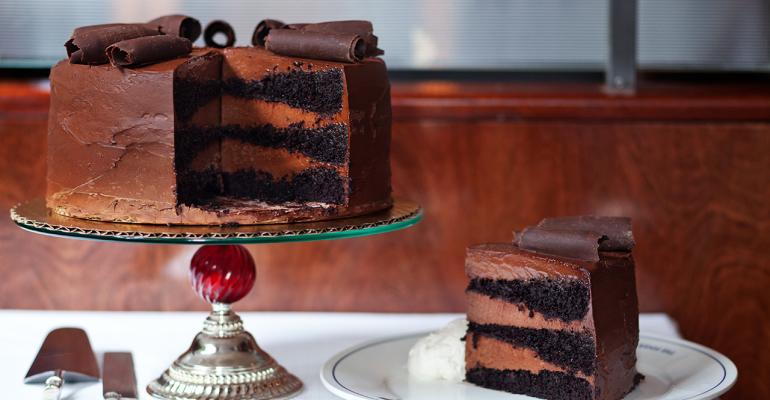 Coffee, tea, hard liquor, wine, cocktails and even beer can elevate the experience

What more is there to say about chocolate desserts? Guests love them, and they often love them the most at their most simple — a molten lava cake, a mousse, even a classic chocolate layer cake can be just what a customer wants at the end of the meal. In fact, in 2021 servings of chocolate cake in restaurants increased by 5%, according to consumer research firm The NPD Group.

But there’s still a conversation to be had about what to drink with them. The right pairing can be a memorable way, not to mention a profitable way, to top off the evening, and can even cast chocolate in a whole new light.

“Chocolate can be just as complex as wine,” said Justin Lorenz, beverage director of the Lotte New York Palace hotel. “There really are these distinct flavor profiles that differentiate them.”

Fine chocolates can, indeed, reflect their beans’ terroir and their producers’ philosophy and technique — whether to leave the chocolate in a more natural state, allowing its distinctive fruity and floral notes to come through, or to tone down the acid in a process called “Dutching” for a smoother, more even flavor.

But even if you keep it simple, there’s a lot to say about what to drink with it.

For example, at the new Margaritaville Resort Times Square in New York City, mixologist Andrew Bateman recommends a variation on the Old Fashioned to go with the property’s triple layer chocolate cake. The All Right All Right All Right cocktail is made with Wild Turkey Longbranch Bourbon, Giffard Banane Du Brésil liqueur, St. Elizabeth Allspice Dram and demerara syrup.

“Notes of caramelized banana and chocolate are a match made in heaven,” he said, adding that the baking spices from the allspice dram “bring and extra depth of flavor to the dining experience.”

Gabriele Guidoni, beverage director of the Fireman Hospitality Group, which operates eight restaurants in New York City, takes a similar approach when pairing beverages with their Chocolate Blackout Cake. His Banana Boulevardier blends bourbon, Campari, sweet vermouth and crème de banana, which are stirred and poured over a large ice cube spritzed with orange oil. It’s all topped with a chocolate wafer.

At the group’s more Italian concepts, however, such as Trattoria dell’Arte and Café Fiorello, he suggests Italian fortified wines such as Recioto di Valpolicella or Barolo Chinato.

Barolo Chinato is a type of spiced wine, infused with flavors of quinine, vanilla, gentian and juniper. “Altogether it becomes richer and spicier, and therefore a great combination with chocolate,” Guidoni said.

“The result is a full-bodied wine that is very similar to an Amarone, but instead of being dry, it is on the sweet side,” Guidoni said.

He said he appreciates those wines for allowing him to pair chocolate desserts with something less typical, and more Italian, than port or madeira.

At Margaritaville, Bateman chooses The Prisoner, a California red blend, to go with the chocolate cake. Made with Zinfandel, Cabernet Sauvignon, Petite Sirah, Syrah and Charbono grapes from throughout Northern California, Bateman said “the soft fruit notes [of the wine] stand up to the richness of the cake,” while the cake enhances the wine.

“Chocolate and red wine blends have always been a classic food pairing, and this pairing brings it to another level,” he said.

Kala Ellis, beverage director for the Indigo Road Hospitality Group — which is based in Charleston, S.C., though she is in Nashville — likes Zinfandel for dark chocolate desserts, such as the Hendry that’s on the list at Oak Steakhouse in Nashville. But for milk chocolate she likes Pinot Noir, such as the Big Table Farms Pinot from Oregon, “which will give you that nice drinkability that makes it not overwhelming,” she said.

But spirits, particularly barrel-aged brown spirits such as whiskey and brandy, are her favorites with chocolate.

“If you really look at what the barrel brings to the table, at its core it brings us some form of vanilla, butterscotch and caramel. So when we taste chocolate with that, it’s a really beautiful combination,” she said.

Ellis’s approach to wine-and-chocolate pairings is to find complimentary flavors, but with alcohol she likes contrast.

“When you drink that with a  more complicated dark chocolate, it creates this really nice finish,” she said.

She likes to contrast milk chocolate with spicy and herbaceous rye, “which is really bright and slightly tannic,” such as George Dickel’s new Leopold Rye.

Of course, you don’t have to drink alcohol with chocolate. Coffee and tea are classic combinations, and Patrick Main, senior manager of research and development for the Peet’s Coffee chain, based in Emeryville, Calif., said the best pairings are sometimes surprising.

For example, deep, rich coffees like the full-bodied ones from Sumatra aren’t great with dark chocolate, he said.

“They kind of occupy too much of the same space,” he said. Both are rich and opulent, so together they’re kind of one-dimensional.

“I want some brightness — something else to provide contrast,” he said.

He likes dark chocolate best with higher-acid, lighter-roast Guatemalan and Costa Rican coffees, “coffees that have sort of a cocoa element to their taste but also all this other dimension of citrus and sweetness and brightness that leaves room for the chocolate to be the chocolate,” he said.

But for sweeter, creamier milk chocolate-based desserts, a darker French or Italian roast can round out those treats with some added bitterness.

As for tea, he leans toward rich black teas such as Chinese Keemun or Indian Assam and Darjeeling.

“Keemun has a lot of tannins, but balanced with a stone-fruit sweetness and malty notes,” he said.

“One example of a great pairing is a roasty, nutty genmaicha [green tea mixed with roasted brown rice] with an earthier chocolate to complement each other’s flavors.”

And don’t count beer out, either, said Richard Hanauer, wine director and partner at the RPM Restaurants in Chicago.

“Beer and chocolate are absolutely amazing,” he said “But you’ve got to listen to the chocolate.”

Obviously if it’s a very dark chocolate, go with a stout, but lighter chocolates with high milk content can go well with lighter ales or lagers, or even pilsners.

“You almost have a Champagne element to it,” he said. 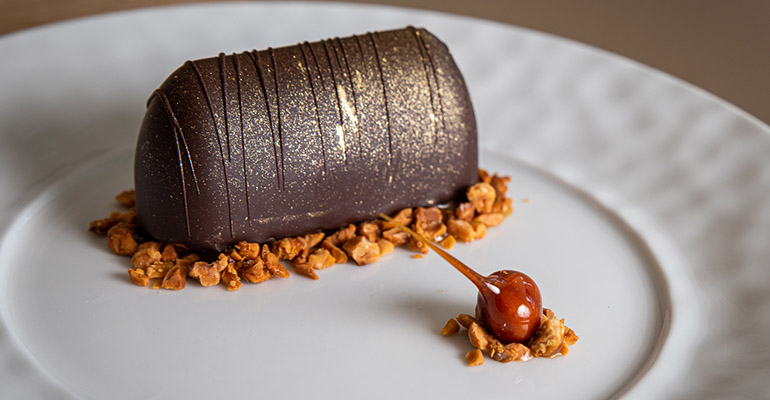 But with RPM Seafood’s dessert of gianduja (chocolate and hazelnut) in a hard chocolate shell over crumbled and candied hazelnuts, he likes to go with a very old tawny port — 40 years old or more — that has enough age that the fruitiness has been muted and has more of a nutty flavor.

But if there’s any saltiness in the chocolate — and that’s an increasingly popular trend — “that opens up the entire camp of island and Islay Scotches,” which are known for their smoky peatiness that “mimics the salt a little bit.”

Back to the Lotte New York Palace and its beverage director Lorenz, he and chef Cedric Tovar have put together four special chocolate bark and cocktail pairings in the hotel’s Gold Room for Valentine’s Day that show just how complex beverage-and-chocolate pairings can be.

The Mrs. Astor cocktail combines citrus vodka with Campari and strawberry reduction and is finished with a mist of balsamic vinegar.

The Gossip Girl combines rosé Champagne with Codígo Rosé tequila — which is aged in Bordeaux barrels to give it a pinkish hue as well as black currant and dark cherry flavor notes — a lemon thyme cordial and an Absinthe wash.

That’s paired with a bark that blends white and ruby chocolate; ruby chocolate is relatively new to the market, is naturally pink and has some subtle berry notes, but overall Lorenz said it’s similar to white chocolate. The bark also has lemon peel, candied violets whose subtle sweet florality will go well with the Absinthe, and lemon thyme for an earthier herbal note. 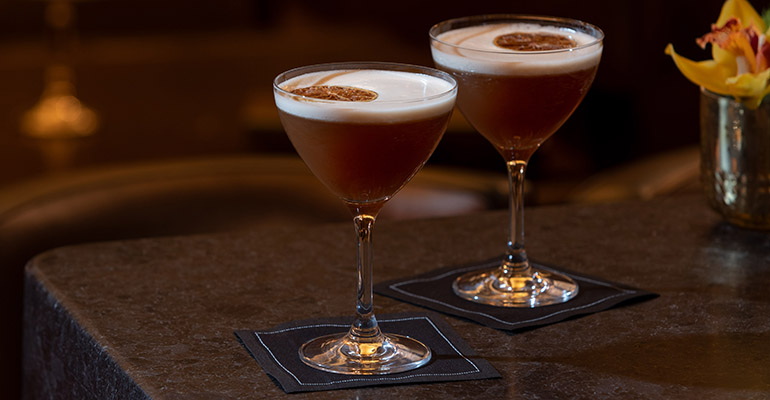 The Commodore cocktail combines Bulleit Bourbon, Amaro Nonino — which is more delicate and a little sweeter than other amari — orange bitters and a coin-shaped orange zest.

Finally, the Las Gorras Blancas cocktail is inspired by the Paloma — a cocktail of tequila and grapefruit juice. It’s made with Puritita mezcal from Pierde Almas — a “softly smoky” mezcal, Lorenz said — along with Aperol, grapefruit juice and simple syrup. It’s garnished with a dehydrated rhubarb twist.

That’s paired with a semisweet Madagascar chocolate that has notes of berries and a subtle fruity acidity. Added to that is chipotle pepper to pair with the mezcal, plus some dehydrated rhubarb.