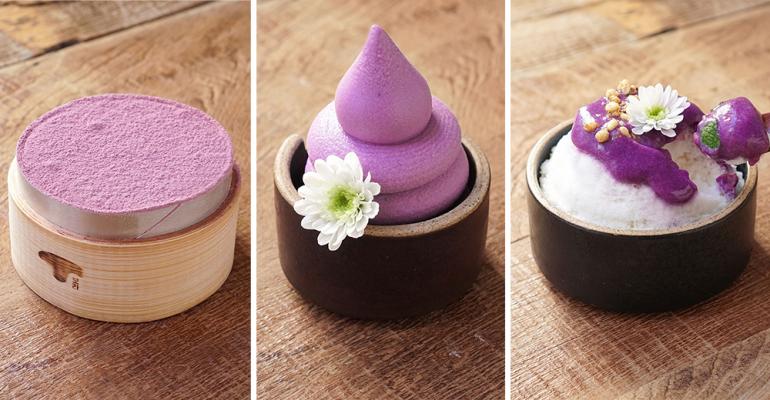 Cafe Bora
The tiramisu, ice cream and bingsu from Cafe Bora made with a Korean sweet-potato varietal.
Food & Drink

These colorful international ingredients add to the culinary palette

As the industry slowly claws its way back to normalcy, restaurateurs are working overtime to convince consumers to put down their remotes, change out of their sweats and return to on-premise dining. One time-tested lure is dazzling plate presentation, the kind that evokes delighted wows, generates enraptured Instagram posts and drives traffic.

The best chefs use their plates as palettes, and their visual artistry has gotten a boost over the recent past with the rising popularity of the color purple. Foods in that hue have been propelled by the emergence of ingredients from around the world, endorsed by dieticians for their nutritional value and promoted by the American Culinary Federation: The ACF recently published a story on the appeal of items like pickled purple cauliflower at Prime & Provisions and fried baby eggplant at Beatnik, both in Chicago.

Purple carrots have turned up alongside their orange and yellow brethren in an elegant composed salad at Rich Table in San Francisco, and purple asparagus has been popping up at farmers’ markets around the country.

Purple cabbage, which has long played a supporting role on menus, has gotten a second wind. Sophisticated salads have given it new visibility, and it adds visual punch to summer specials like Sweetgreen’s Strawberry Fields Salad that promises a “picnic in a bowl” and Chopt’s Mexican Street Corn Caesar Salad that is finished with cotija-herb Caesar dressing. At Lula Restaurant Distillery in New Orleans, Creole slaw made with a mixture of green and purple cabbages is a menu fixture that does double duty as a side dish and as a salad base.

It’s been a decade since açaí first cast its purple haze on menus. The fruit of a South American palm tree, it has been touted as a superfood based on its high level of antioxidants. Jamba Juice jumped on the bandwagon early with the “whirl’d famous” Açaí Super Antioxidant Smoothie that combines the title ingredient with soy milk and berries. Atlanta’s Upbeet is all about “good vibes only” with clean, GMO-free dishes like the pretty, violet-hued OG Açai Bowl that combines organic fruit and almond milk. Another açaí bowl at Upbeet, The Little Mermaid, is made with cashew milk and gets a double dose of color from Blue Majik, an extract of nutrient-dense spirulina, which has also been trending on menus of late. 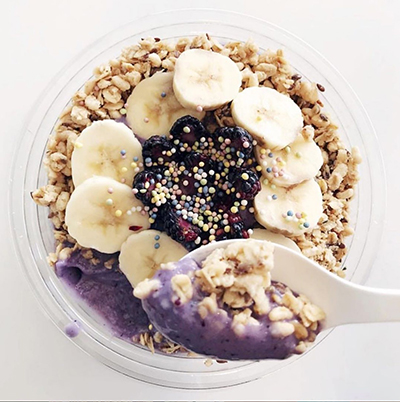 Photo: The Little Mermaid from Upbeet.

Ube, the bright purple sweet potato that is a staple of Filipino cuisine, is a more recent import to mainstream menus. While it can be used in savory dishes, ube appears most often in desserts and drinks. In New York City, Maharlika and sibling operation Jeepney introduced accessible, easy-to-like items, like chicken and ube waffles at the former and ube milkshakes at the latter. On the West Coast, Irenia, which is currently operating as a pop-up in Santa Ana, Calif., has received positive press for the ube-brown sugar pie.

Ube has really made its deep lavender mark in ice cream, soft-serve and halo-halo, a milk-based Filipino dessert loaded with ice and assorted fruits, gummies and other sweets. At Outlier in Seattle, Ube Milk Toast is topped with ube ice cream and piped with an ube-and-condensed milk combination. Jollibee, the Philippines-based, quick-service chain with 37 units throughout the United States, offers its version of halo-halo crowned with dollops of ube and mango ice creams and a tiny square of flan.

Ube has made a vibrant splash on cocktail menus, as well.  At Bonifacio, a contemporary Filipino restaurant in Columbus, Ohio, Oooh Bae! is a take on the Margarita finished with ube-citrus foam, while at Big Bar in Los Angeles, Grimace’s Day Off, a riff on the classic Ramos Gin Fizz, uses a simple syrup made with ube.

Bora is the Korean word for purple. And the color figures prominently on the menu at South Korea-based Cafe Bora, which is currently opening stores in Toronto, Los Angeles and Atlanta.  The sweets specialist offers bingsu, Korean shaved ice, along with ice cream and desserts like tiramisu, all of which are made from a Korean sweet-potato varietal. Show-stopping presentation is a signature of the operation, and the vivid lilac hues are the stuff that Instagram dreams are made of.