/sites/all/themes/penton_subtheme_restaurant_hospitality/images/logos/footer.png
Recent
Recent
4 great cheesecake offerings from independent restaurants across America
May 25, 2022
5 food and beverage innovations at the restaurant show
May 25, 2022
T2D Concepts develops revolutionary franchise model in Roots Chicken Shak
May 24, 2022
Eight interesting foods at the National Restaurant Show that were not plant-based protein
May 24, 2022
Nine beverage trends spotted at the National Restaurant Association Show
May 23, 2022
Featured
Meet 4 emerging NYC concepts
May 16, 2022
Savannah restaurateurs Mashama Bailey and Johno Morisano open two concepts in Austin
May 02, 2022
Denver's oldest brew pub, Wynkoop Brewing Company, is getting a fresh start
May 02, 2022
Chef Danny Grant opens café/gourmet market in Chicago with a European vibe
Apr 28, 2022
New on the Menu
brought to you by
Food & Drink

New on the Menu: A steak-tartare sandwich, duck and dumplings and feta cheesecake 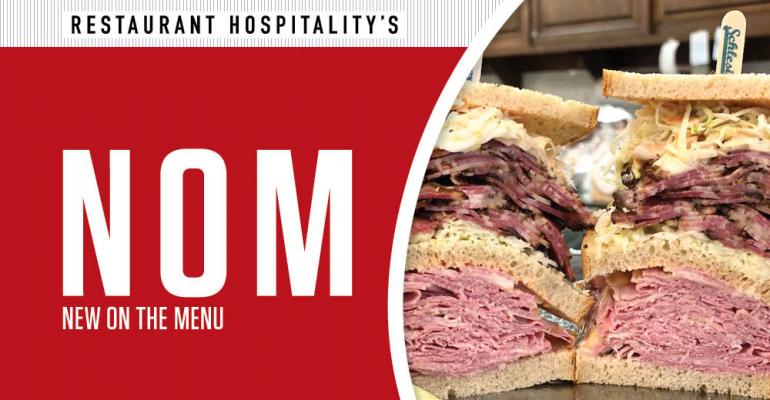 This week we have two very different sandwiches to look at: A luxurious one made with steak tartare topped with caviar at Pebble Bar in Midtown Manhattan, and a gigantic one with pastrami and corned beef at Schlesinger’s near Philadelphia’s Rittenhouse Square. The latter, named for The Zelenskyy, is a huge affair raising funds for Ukrainians in need at $39 a pop. The former is priced at just $3 more and is presumably on the menu because it has been a very long two years in New York, people want to treat themselves and chefs want to indulge them with the best ingredients they can find.

At Moréa, a Mediterranean restaurant in Fort Lauderdale, Fla., cheesecake is given a pronounced Greek flavor by blending cream cheese with barrel-aged feta, and in Denver at Fire Restaurant & Lounge, chicken & dumplings get an upgrade by using duck confit and ricotta dumplings instead.

And back in New York, at a new Rome-inspired discotheque called Ciao Ciao, a strawberry mezcal Negroni shows up in leopard spots.

The description of the steak tartare sandwich has been edited for clarity.
Start Slideshow ›
0 comments
Hide comments
Recommended Reading