/sites/all/themes/penton_subtheme_restaurant_hospitality/images/logos/footer.png
Recent
Recent
French desserts take on East Asian flavors such as ube, guava and champorado
May 17, 2022
With the opening of Roca’s Pizza & Pasta, Alex Seidel returns to his roots
May 13, 2022
New on the Menu: Chicken skin with caviar and Southwestern dandan noodles
May 13, 2022
Okan Kizilbayir focuses on seafood at Salt restaurant on Amelia Island in Florida
May 13, 2022
Justin Sutherland shares cooking tips as wild Alaska salmon season opens
May 12, 2022
Featured
Savannah restaurateurs Mashama Bailey and Johno Morisano open two concepts in Austin
May 02, 2022
Denver's oldest brew pub, Wynkoop Brewing Company, is getting a fresh start
May 02, 2022
Chef Danny Grant opens café/gourmet market in Chicago with a European vibe
Apr 28, 2022
Rohini Dey’s Vermilion explores the Latin-tinged food history of India
Apr 27, 2022
New on the Menu
brought to you by
Food & Drink 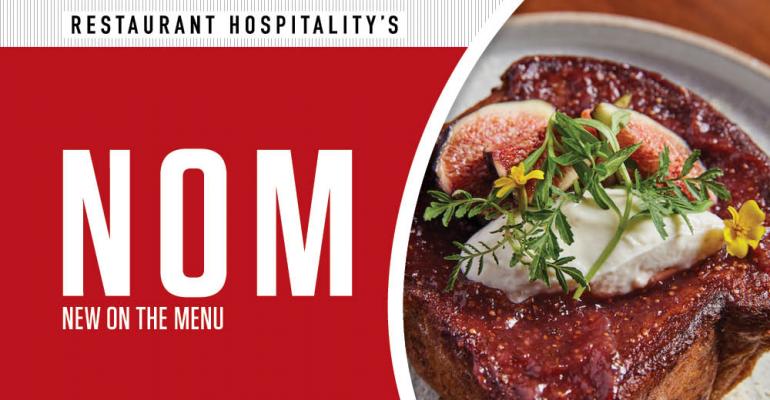 It’s hard to imagine that 10 or 15 years ago you would have to explain to most Americans what hummus is. Now it’s in every supermarket and a lot of convenience stores, which can make it hard for chefs to make theirs stand out. Jonathan Ho does that by making a completely different dish: Hummus is by definition made with chickpeas and generally tahini, lemon juice and garlic, but at The Landing in New York City he makes them with white beans and without tahini — although it still has garlic and lemon juice. Calling it hummus still makes sense, however, because that’s something that’s so well known that his customers will understand what they’re getting.

In Wimberley, Texas, chef Ryan Hildebrand does his own take on southern tomato pie at Hildee’s Dine-Inn, which does not traditionally use confit tomatoes.

And in Nashville at the new Stationairy restaurant, Sean Foley lightens up lamb shanks with more springlike flavors such as preserved lemon.