At IV Purpose, a Penn State-oriented sports bar in the Brooklyn, N.Y., neighborhood of Bedford-Stuyvesant, chef Taehesha braises oxtail for five hours with carrots, celery, onions, garlic, habanero pepper, paprika, allspice and some other secret spices sauteed in olive oil. Then she cools the meat, pulls it, shreds it and makes a gravy out of the pan drippings. She tosses the shredded meat in the gravy and puts it on a toasted, soft, slightly sweet brioche bun with a coleslaw derived from her grandmother’s recipe with red cabbage, red onion, celery seed, mustard seed, mayonnaise, red wine vinegar and a little agave syrup.

At Silas Creative Kitchen + Cocktails in the new Hotel Versailles in Versailles, Ohio, executive chef Aaron Allen cooks farro in water with chorizo and then finishes it with dehydrated strawberries as well as strawberries macerated with lime. He sears Nantucket scallops, serves them over the farro and dresses them with a romesco sauce of roasted peppers, onions, garlic and chiles blended with olive oil, citrus and sherry vinegar. The dish is finished with a hazelnut picada made by toasting the nuts and blending them with lemon zest and juice plus garlic, cilantro, parsley and oregano.

Allen says the unconventional use of strawberries makes the dish bright and fresh.

At Maiz64 in the Logan Circle neighborhood of Washington, D.C., chef Alam Méndez Florián recently introduced this reinterpretation of the traditional stuffed poblano pepper, which is normally breaded, fried and served hot. This is none of those. He starts by char-grilling the skin of a poblano pepper, covering it, letting it rest for around 35 minutes and then rubbing the charred skin off. He lets the pepper cool and then stuffs it with tuna, octopus and poached shrimp mixed with tomatoes, red onion, cucumber and a dressing of mayonnaise and lime juice spiced with morita, guajillo and ancho chiles.

It’s served cold in a sauce of tomatillos, poblano and jalapeño peppers, lime juice, garlic and fresh oregano. The dish is garnished with shaved radish and served with avocado slices and corn tostadas.

He uses that, plus a squeeze of lemon, to dress julienne Italian kale which he plates into a sort of nest. He puts a soft-boiled egg sprinkled with shichimi togarashi in the center, along with young dry-sautéed anchovies called chirimen jyako and pickled red onion.

The steak is three pounds of porterhouse dry aged for 35 days, marinated in a blend of traditional honey steak sauce plus soy sauce, ginger, garlic and a secret blend of Chinese spices cooked at high temperature in an infrared oven.

The Peking duck is a two-day process beginning with separating the skin from the meat and drying it under fans until it hardens. It’s then roasted while being basted with honey, soy sauce and vinegar, and sliced at tableside.

Those dishes are  accompanied by traditional chicken fried rice with chunks of lobster added, French fries, onion rings and mushrooms and onions griddled with soy sauce and vinegar. 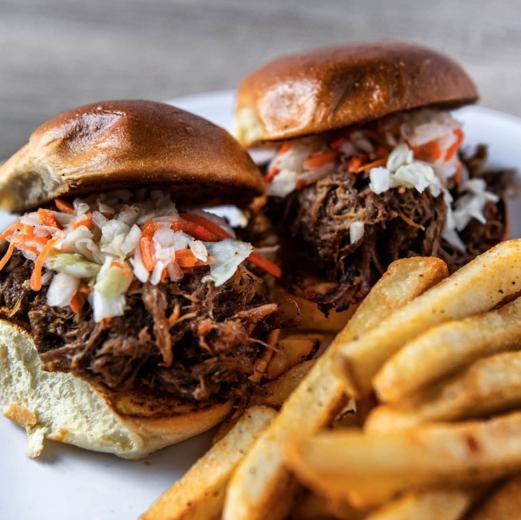