Intersect by Lexus is a lounge, restaurant and event space run by the car company. Its New York City location has teamed up with The Grey, chef Mashama Bailey’s restaurant in Savannah, Ga., to prepare select menu items for takeout and delivery. Pictured here is Bailey’s Yardbird, which are seared and roasted airline chicken breasts served over toasted and buttered sourdough that has been smeared with pureed roasted garlic. The dish is garnished with currants, almonds and parsley and served with Captain Sauce, made by sweating onion, peppers, garlic and serrano chile, adding curry powder followed by tomatoes, then red wine, then chicken stock and cooking it down into a sauce. It’s accompanied by collard greens, pickles and bread.

Price: $65 with an appetizer and dessert

International Smoke Del Mar in San Diego is a venture by Michael Mina and Ayesha Curry that features barbecue with global flavor influences. As if that weren’t enough, it has a virtual brand, Tokyo Hot Chicken, that is a mashup of Japanese-style fried chicken, or karaage, and Nashville hot chicken, which is fried chicken doused in spicy oil. For this particular sandwich, chicken breast is brined in a proprietary blend, breaded, fried and then dipped in a mild chile oil. It’s served with Sriracha aïoli, pickled Japanese cucumbers, coleslaw and yuzu mayonnaise.

At Vaso in Dublin, Ohio, chef David Belknap uses frozen green peas instead of chickpeas to make a unique version of this ubiquitous dip. He blanches and shocks the peas and then purées then with the solids from the restaurant’s basil oil, along with fennel seed, white pepper, white miso, garlic oil and lemon oil.

“The result is a bright green purée with hints of anise, roasted garlic and umami.”

Xiquet DL, a tasting-menu-only restaurant in Washington, D.C., featuring the Valencian cuisine of Spanish chef Danny Lledo, had the misfortune of opening in February of last year, but it’s up and running again, featuring dishes like this luxurious beggars-purse style of dumpling filled with foie gras and clementine jam in a broth of Espagnole sauce, a classic sauce of beef broth with mirepoix and tomatoes thickened with roux.

Price: Part of a tasting menu that ranges from $125 for seven courses to $175 for ten courses (a $65 four-course menu is available for takeout).

Pickled red onions give extra zip to this dish, served at Creag at McLemore, which opened near the end of 2020 in Rising Fawn, Ga. Chef Tony Hooper dices the onions and combines them with roasted and diced beets in an avocado lime vinaigrette. It’s garnished with chopped scallion and served with a streak of avocado purée and baguette slices 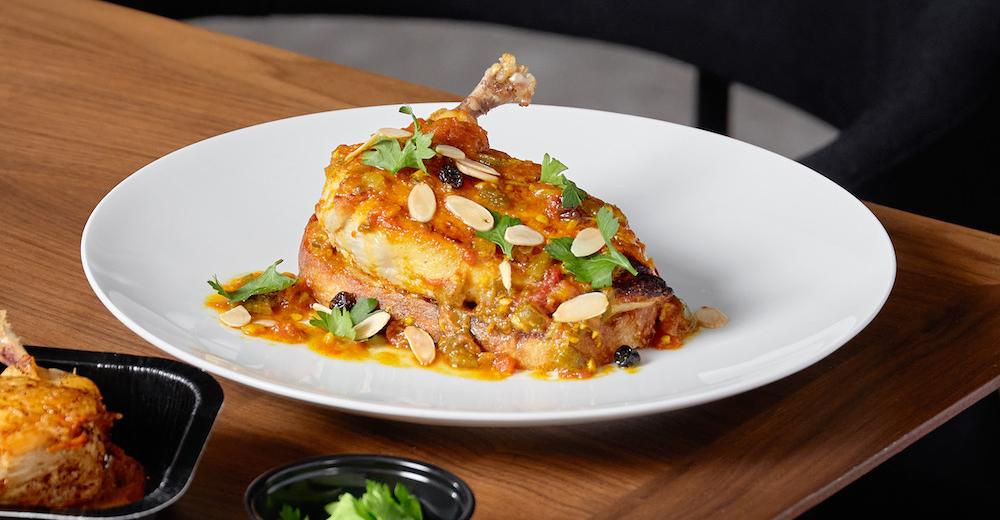 Next Up
New on the Menu: Warming beef dishes and a Lunar New Year salad
Start Slideshow ›