At Five Acres, which opened at Rockefeller Center in New York City in December, chef and restaurateur Greg Baxtrom makes a traditional Japanese vinegar-based dressing called tosazu and adds bonito flakes to give it a more smoky/savory flavor and then sets it with gelatin. He lightly smokes and whips crème fraîche and makes a shiso oil by blending neutral oil with green shiso in a blender and then whisking in a hot pan for two minutes. Those three components are placed on shucked Island Creek oysters, which are on a bed of seaweed and oyster shells. Then he uses a smoking gun to cold smoke the oysters.

The dish is named for Vanderbilt Street in Brooklyn, where Baxtrom’s restaurants Olmsted, Maison Yaki, and Patti Ann’s are located.

At Sunda New Asian, which has locations in Chicago and Nashville, culinary director Mike Morales offers this dish based on a northern Thai noodle curry. He toasts ancho and guajillo chiles and blends them with shallots, garlic, ginger, turmeric, cumin and Madras curry to make a very aromatic paste. Then he adds coconut milk and to make a sauce out of it and finishes it with fish sauce.

He cuts out the underside of two lobster tails to make them easier for guests to eat, then dredges them in potato starch and fries them to golden brown. The lobster is tossed with rice noodles, the sauce, bean sprouts, string beans, and red onions and garnishes it with mint, cilantro, Thai basil, fried vermicelli noodles, and half a lime.

I did that on Purpose

At North of Bourbon in Louisville, Ky., beverage director and co-owner Brad Jennings created this boozy snowball in collaboration with the other owners and the bar team.

The drink starts with Big Red cream soda, which is reduced by half with a little sugar and finished with a squeeze of lemon juice. An ounce and a half of that of that is combined with an ounce and a half of vanilla bean-infused Tito’s Handmade Vodka and ¼ ounce of Giffard Vanille de Madagascar Liqueur. That’s shaken with ice and strained.

Separately, an ice block put in the bar’s shaved ice machine to create a powdery snow-like texture. That’s placed in a coupe glass. The cocktail is slowly poured over that and then topped with more shaved ice. It’s finished with zig-zag strips of condensed milk.

“The significance of having hand-shaved ice cocktails on the menu is to take us back to being a kid again and remind us to have fun,” Jennings said. “With that in mind, we decided to make a Big Red syrup and use that as the foundation in a cocktail. The idea behind the name is that it may not initially make sense on the surface, but it’s all done with intent.”

Tulum by the Beach

At Oak at Fourteenth in Boulder, Colo., chef John Bissel makes a clam chowder sauce by reducing cream by half and then adding sweated leak bottoms, thyme, and clam juice and then puréeing the mixture.

Bissel roasts Alaska halibut fillet in the restaurant’s wood burning oven, giving it a touch of smokiness. While it cooks to medium doneness, he poaches julienne russet potatoes in the clam chowder sauce. He serves the fish over the potatoes, tops them with the fried leeks, and then pours the sauce around it, dotting the sauce with the black and green leek oils. 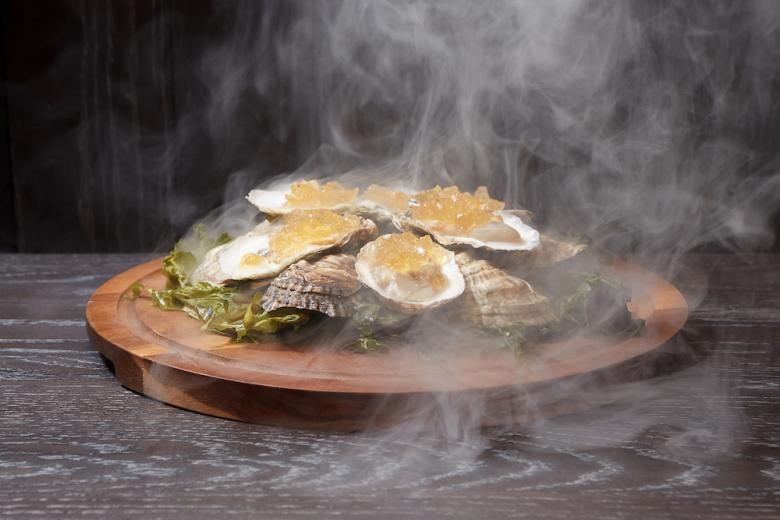 Next Up
New on the Menu: Stuffed wings, Turkish carrot spread, and a Colombian cocktail
Start Slideshow ›