As processed plant-based proteins proliferate on burger menus, Robert Garcia, chef of Marigold at Resorts World Las Vegas, turned to actual plants instead, specifically roasted cauliflower, quinoa, chickpeas and golden raisins, which he blends into a patty that is vegan, gluten-free and has a unique earthiness from the cauliflower. It’s griddled and served on a black sesame brioche bun with cucumber, pea sprouts, roasted tomato, tahini aïoli, lettuce and onion. It comes with fries.

At The Maker Restaurant in Hudson, N.Y., executive chef Michael Poiarkoff combines three grains — freekeh, bulgur and farro — in a pot, covers it with vegetable stock, brings it to a simmer and then cooks it in the oven. Then he adds a thick puree of kale, parsley and mint, heavily roasted asparagus and more stock and tosses them in a small pot to release the starches from the grains and give the mixture a creamy, risotto-like consistency. Then he tops the grains with raw and blanched asparagus, followed by a dusting of nettle salt, made by slowly roasting nettles when they’re harvested in the spring, grinding them and combining them with salt. The dish is finished with lemon zest.

The classic Greek gyro sandwich is given an upscale touch at Tribeca’s Kitchen in New York City, where chef J.J. Vasquez marinates lamb shanks in an aromatic yogurt seasoned with rosemary, oregano, lemon, garlic and cinnamon, among other flavors, which both seasons and tenderizes it. Leaving the yogurt on, he roasts it in a medium oven for 20 minutes, allowing the yogurt to dry and form a sort of crust. Then he covers it in a sauce made from roasting carrots, onions, celery, fennel and garlic in olive oil and then adding tomato paste and simmering it in red wine. The lamb is braised in that liquid for 4-5 hours until it’s fall-off-the-bone tendeer, but Vasquez wraps each shank individually and lets them cool.

Meanwhile he reduces the braising liquid into a gelatinous glaze and coats the reheated shanks in that.

Philip Sireci, the chef of Fine & Rare in New York City, makes standard salmon tartare local and seasonal by using local steelhead trout — a cousin of salmon — which is raised on a self-contained land-based farm, meaning it has no impact on the local ecosystem and also has a fresh, clean flavor.

He mixes it with shallot, tarragon, fennel and a Meyer lemon vinaigrette along with English cucumber, which Sireci says adds freshness, and asparagus for earthiness.

“Both are subtle and add some interesting textures to this dish,” he said.

This dish is on the summer menu, launched this week, at Thirsty Lion Gastropub & Grill, a nine-unit chain based in Scottsdale, Ariz., with locations in Oregon, Texas and Colorado as well as Arizona.

For this dish, developed by co-founder and executive chef Kieth Castro, large U-10 scallops are seasoned with flaky sea salt and then seared in a little olive oil. They’re plated around a scoop of cilantro jasmine rice over sautéed asparagus, roasted mini-peppers, grape tomatoes and spinach topped with Meyer lemon beurre blanc and lemon zest. The dish is garnished with a red pepper curl, a green onion curl and a fried lotus root chip. 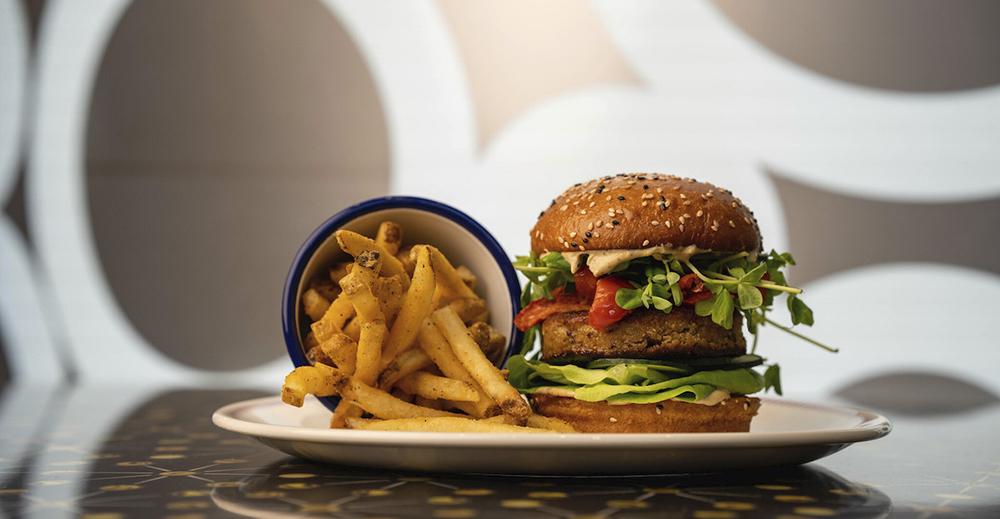