Chef Nicholas Elmi, known for his South Philadelphia tasting menu restaurant Laurel (as well as his appearance on Season 11 of Top Chef), opened Lark restaurant a couple of weeks ago in Bala Cynwyd, Pa., where he is making deviled eggs for which he whips the cooked yolks with Dijon mustard, mayonnaise, Worcestershire sauce, apple cider vinegar, Tabasco and olive oil. That mixture is piped back into the yolks and then topped with raw sea urchin and garnished with dehydrated chives that have been seasoned with piment d’Espelette, nori, sesame seeds and salt.

At Jack & Charlie’s No. 118, which opened last month in New York City, chef and partner Ed Cotton offers a variety of plays on classic New York cuisine, including this dish that combines two Jewish delicacies, the potato hand pie called a knish, and the bagel.

He starts by peeling and cubing Idaho potatoes, boiling them until just tender, straining them, putting them on a parchment-lined sheet pan and baking them for a few minutes to dry them. Then he passes them through a food mill with a little butter and adds scallions, salt and pepper.

Next he uses an ice cream scoop to make one-ounce portions, which he refrigerates.

Once chilled, he wraps them “kind of like making soup dumplings,” in a hand-pie dough spiked with lemon juice and lemon zest. He firms them up in the freezer, then brushes them in an egg wash, coats them in the same spice blend used on “everything bagels” — poppy seeds, sesame seeds, dried garlic, dried onion and salt. He bakes them at 350 degrees Fahrenheit until golden brown and serves them with a side of whipped crème fraîche and optional golden osetra caviar.

At PB&J in Chicago, chef Sal Isaiah is making this seasonal item, starting with pizza dough spread with ricotta béchamel sauce. Then he tops that with kale, Prosciutto di Parma, pieces of brie cheese and delicata squash that has been coated in oil, seasoned with garlic powder, onion powder and salt and roasted. He then bakes the pizza and finishes it with black pepper.

At Sadie’s, which opened in Nashville in October, executive chef Margaret LaVetty marinates seeded butternut squash thoroughly in a blend of sumac, coriander, orange juice and olive oil. She roasts it until tender and until the bottom is caramelized.

Separately, she steams red and white quinoa, tosses it with dry cranberries, mint and sautéed Lacinato kale, scoops that into the squash and bakes them again to order. The dish is served over a tart butternut squash purée flavored with cider vinegar and sumac. 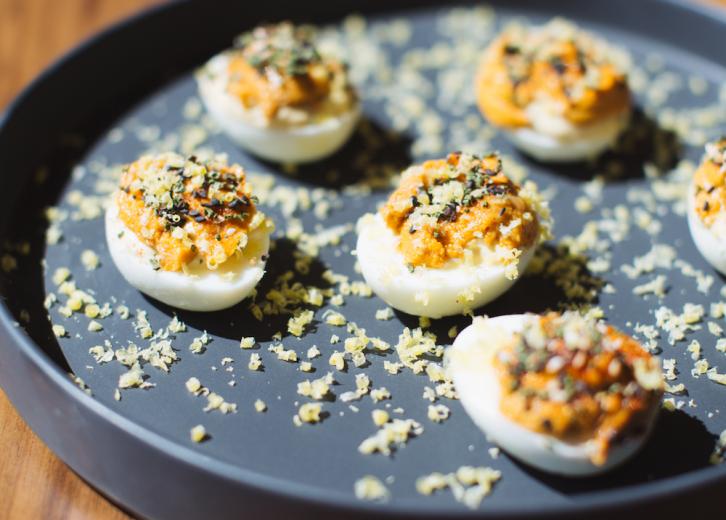 Next Up
New on the Menu: Basque anchovies, samosa chaat and a variation on the Aperol Spritz
Start Slideshow ›