/sites/all/themes/penton_subtheme_restaurant_hospitality/images/logos/footer.png
Recent
Recent
French desserts take on East Asian flavors such as ube, guava and champorado
May 17, 2022
With the opening of Roca’s Pizza & Pasta, Alex Seidel returns to his roots
May 13, 2022
New on the Menu: Chicken skin with caviar and Southwestern dandan noodles
May 13, 2022
Okan Kizilbayir focuses on seafood at Salt restaurant on Amelia Island in Florida
May 13, 2022
Justin Sutherland shares cooking tips as wild Alaska salmon season opens
May 12, 2022
Featured
Savannah restaurateurs Mashama Bailey and Johno Morisano open two concepts in Austin
May 02, 2022
Denver's oldest brew pub, Wynkoop Brewing Company, is getting a fresh start
May 02, 2022
Chef Danny Grant opens café/gourmet market in Chicago with a European vibe
Apr 28, 2022
Rohini Dey’s Vermilion explores the Latin-tinged food history of India
Apr 27, 2022
New on the Menu
brought to you by
Food & Drink

New on the menu: Crunchy carpaccio and smoked sashimi 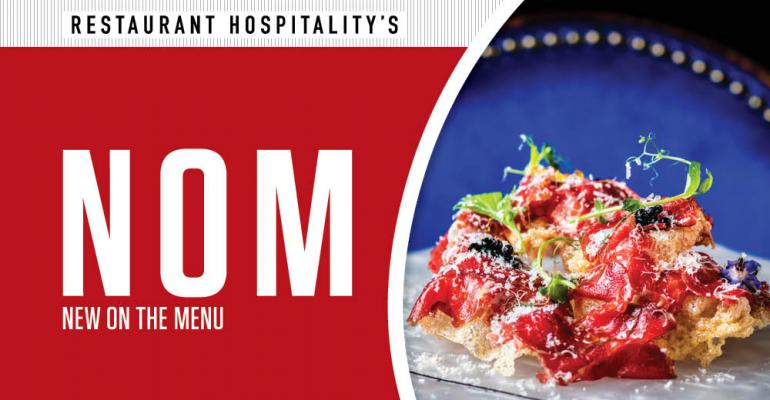 Start Slideshow ›
Plus a farm-to-table arepa, pad Thai dumplings and a springtime cocktail

An arepa is a type of corn cake from Central and South America — more rustic than a tortilla, and heartier. A Colombian version is available at Carnivale in Chicago, where chef Carlos Lucas Garza makes it using fresh corn and serves it with preserves made with tomatoes from his rooftop garden, creating a farm-to-table version of the menu item, and managing to charge $24 for it.

Carpaccio is considerably more refined, but chef Elier Rodriguez gives it some oomph at Dolce Vita in Washington, D.C., in the form of pork cracklings, along with a tough of molecular gastronomy with some balsamic vinegar pearls.

At the New York City outpost of Katsuya, which has restaurants all over the world, kingfish sashimi gets an enhancement with cold smoke, and at The Henri in Washington, D.C., a light spring cocktail gets smoke from mezcal.

And in Charleston, S.C., at Bistronomy by Nico chef de cuisine Andrew Singer makes pad Thai with beef and turns it inside-out, serving the meat inside the noodle by making a dumpling.