New on the Menu: A birria torta, Japanese eggplant fritters and a Southern trout in a New England sauce 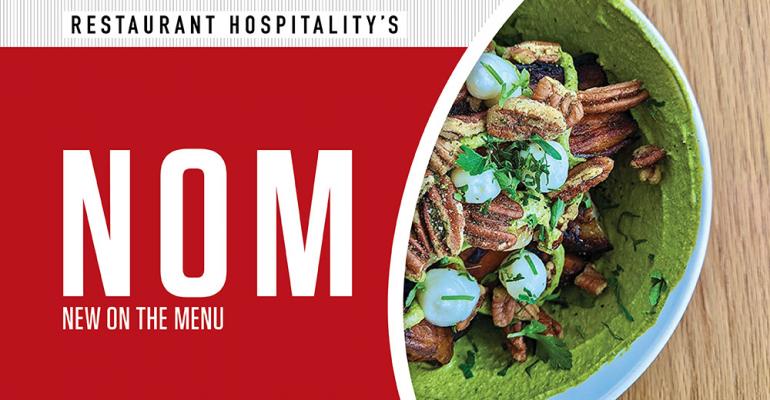 Start Slideshow ›
Plus dishes from Zachary Engel at Galit in Chicago and Richard Chen, the new chef at Red 8 at the Encore Boston Harbor

Welcome to this relaunched weekly version of New on the Menu, which highlights creative dishes at independent restaurants across the country.

This week we look at chef Malcolm McMillian’s trout dish at Benne on Eagle in Asheville, N.C., which he serves over a chowder made New England-style, but the clams are replaced by catfish that he smokes in-house, and the clam juice is replaced by trout stock.

Next we showcase FM Kitchen & Bar in Houston, where head chef Bety Barrera makes use of the increasingly popular taco filling, birria. Originally from the Mexican state of Jalisco, birria is traditionally braised goat, but in the United States it’s often made with beef and served in tacos with a reduction of the braising liquid served on the side. If that sounds a little like a French Dip, then you and Barrera might be on the same wavelength: She puts the birria on a telera roll and serves it as a sandwich.

Zachary Engel, the award winning chef making Middle Eastern-inspired food in Chicago, is roasting local sweet potatoes and dressing them in a variety of Near Eastern flavors, including sesame, cilantro and garlic.

In New York City, a Japanese meat distributor based in the Bronx, N.Y., has opened an Italian restaurant in Manhattan named Marezzata, which means “marbled” in Italian and refers to the meat they sell. Dengaku is a Japanese term for food that’s glazed in miso, and that’s what they do with the eggplant fritters featured in this week’s NOM.

Finally we go to Boston, where Richard Chen, the new chef of Red 8, is celebrating the Lunar New Year with a whole steamed sea bass.