The Brooklyn-style pizza, thin-crust brick-oven pizza authentic to its Neapolitan roots and served in sit-down settings that rose to prominence in the mid-aughts hasn’t gone away. Instead, it is getting a reset from pizza players bringing it beyond the boroughs.

Among those players is Dominic Cavagnuolo, the founder of upscale pizza restaurant Lucali Miami, who is expanding his brand with DC Pie Co., a more casual pizzeria dedicated to “old-school” pies inspired by those he enjoyed growing up in Bay Ridge, Brooklyn.

“Pizza is going in a new direction,” said Cavagnuolo. “Chefs who are trained in the best institutions are getting into the pizza business. People are raising the stakes.”

Cavagnuolo describes his pies as similar to Neapolitan style, but lighter and with a chewy texture. Made in a brick-oven with only fresh ingredients, DC Pie Co. offers a small selection (compared to traditional American pizza) of toppings, such as portobello mushrooms, homemade meatballs, pepperoni, artichoke hearts and long hots.

In addition to the Miami flagship and Denver locations, Cavagnuolo has plans to expand into new markets, and eventually take his brand of Brooklyn-style pizza nationwide.

Though Cope grew up eating American-style fast-food pizza with thick crust and heavy toppings, she said, “I liked to eat [New York-style] the most.”

Cope also chose to serve New York-style, which is typically cooked in a gas deck oven at 500 or so degrees for about 10 minutes, because it was easiest to execute and best lent itself to the slice game. Unlike, say, small Neapolitan pies, which require highly skilled labor to produce and which cook for only a few minutes at very high heat.

“Turn your head for five seconds and burn your pizza,” Cope warned.

Empire’s menu features whole pies that range from $20 for plain cheese to $26 for The Hamburglar, made with mozzarella, cheddar, ground beef, Roma tomato, dill pickle, white onion and spicy brown mustard, as well as a daily selection of slices for just $3.75 each.

The fact that the New York-style slices are large enough to constitute a meal was a big plus, too.

“Where we are we have all income levels, so we needed to be affordable,” said Cope.

In addition to the full-service Empire Slice House, Cope also operates and the adjacent Easy E Slice Shop, a sidekick to-go and delivery-only eatery. In February, she plans to expand her burgeoning pizza empire to Tulsa, Okla.

Next-level Neo-Neapolitan pizza might be the best way to describe the pies at Pizzeria Beddia in Philadelphia, the sit-down iteration of Joe Beddia’s former to-go-only shop that Bon Appetit magazine named “best pizza in America” in 2015.

“People describe it sometimes as Neo-Neapolitan,” owner Joe Beddia said. “I took it a step further and made it with actual American ingredients.”

But Beddia also says his pizza is as much New York as it is New Haven, with its long-fermented dough (a day and a half) made into a thin crust by heating for 10 minutes in a 500-degree gas deck oven and topped with fresh, mostly, American ingredients.

“Pizza is very subjective,” said Beddia. “Quality is not subjective. You can taste if something is quality.”

“My pizza fits into my pizza category,” said Silverton. “It isn’t regional pizza.”

At her celebrated Pizzeria Mozza in Los Angeles and Newport Beach and to-go spinoff Mozz2Go, which she co-owns with Joe Bastianich, Silverton makes pizza through the lens of baker — paying as much attention to the foundation as what goes on top of it.

Silverton gives her thin crust “the character of a well-crafted loaf of bread,” with a long-fermented dough (two and half days) before baking it for eight to 10 minutes in a wood-fired oven similar to those used to make Neapolitan pies but heated to just 500 degrees. The bread-like crust is topped with California ingredients, such salame, tomato, mozzarella and Fresno chiles ($22), or squash blossoms, tomato and burrata ($25).

Having succeed with sit-down and to-go pizza, Silverton’s newest venture is Pizzette (pronounced Pee-ze-tay), a fast-casual spot in a new food court in the Culver City neighborhood of Los Angeles. The eatery will offer a selection of stuffed pizzette, individual-sized open-faced pizzette, sandwiches and salads all under $15.

“What we’re seeing is a more casual kind of eating,” said Silverton. “Pizza is perfect … a pizzeria is a lot more profitable.”

Detroit-style pizza, best known for its rectangular shape and thick caramelized cheese crust, is gaining traction on the East Coast.

Among its fans are Francis Garcia and Sal Basille, the cousins behind the New York-based chain Artichoke Basille’s Pizza, who have opened Lions & Tigers & Squares, a Detroit-style pizzeria with locations in Chelsea and the East Village in Manhattan.

“It’s cooked with the cheese on it, sauce put on after,” said Garcia of the Midwestern pan-pizza. “It’s a totally different mouthfeel.”

Among the offerings by the square slice are varieties such as classic cheese, made with caramelized cheddar crust (made with Wisconsin “brick” cheddar cheese that accounts for the pie’s signature greasiness) topped with thick tomato sauce, and more unusual flavor combinations, such as the cousins’ take on Detroit mustard pie, made with caramelized cheese crust topped with corned beef, sauerkraut and spicy brown mustard.

With Emmy Squared locations in New York, Nashville, Tenn., and Philadelphia, Hyland says she tried to be “emblematic” of the Detroit-style, using traditional metal pans, proofing the dough in the pans, and making the pies super cheesy with cheddar to achieve the “frico” crust, a caramelization of the cheese and dough, which she says is her favorite part of the pizza. But Hyland also has fun with non-traditional toppings, with offerings such as The Emmy, with banana peppers, red onions, ranch and side sauce ($21) and Angel Pie, with ricotta, mushrooms and Truffleist mushroom cream ($24).

“You can never have enough pizza,” said Hyland. “We’ve all been drawn to pizza. It’s just a long-standing, archetypical, American experience.” 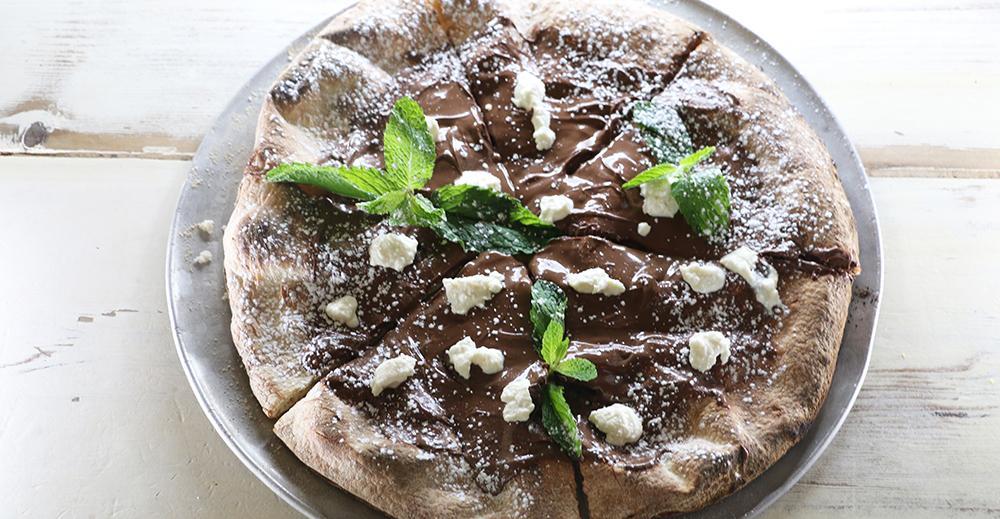 Next Up
Flavor of the week: Bonito is more than just a seasoning
Start Slideshow ›