AF&Co said this curry noodle dish from Malaysia and Singapore is the “hottest dish of the year” as it is becoming increasingly popular in the United States. Pictured is a vegan laksa from Lion Dance Cafe in Oakland, Calif.

This treat that’s popular in many Asian countries — and has long been popular in Hawaii, where it’s called “shave ice” — is comprised of shaved ice topped with sweets ranging from condensed milk or coconut milk to red beans, corn, jellies, jasmine syrup and more is now given more Western treatments with flavors such as salted caramel and espresso syrup. AF&Co says it’s the “dessert of the year.”

Pictured is the Spiked Ice at La Perla at The Plaza Hotel Pioneer Park in El Paso, Texas, where pastry chef Marisol Puentes tops shaved dairy, or “cream ice” with fruit and a perfume bottle filled with Midori. The bottle is a reference to the perfume line of Elizabeth Taylor, who was a resident of the hotel.

Drinks such as the Amaretto Sour, the Grasshopper, Tequila Sunrise, Long Island Iced tea (pictured) and anything made with Blue Curaçao are enjoying a resurgence of popularity as part of a broader retro trend.

The food of the region extending from the West Indies to Belize and Guyana is the “cuisine of the year,” according to AF&Co. Encompassing many cultures and cooking styles, the foods of the region are becoming increasingly popular particularly as Black chefs in the United States explore their own culinary roots. Pictured, from Sobre Mesa restaurant in Oakland, Calif., is Pork Tenderloin “Pernil Style,” for which chef and owner Nelson German marinates pork tenderloin in a mixture of pineapple, garlic, citrus and chiles. He then sears it and finishes it with a blend of cumin, coriander, achiote, garlic, oregano and dried culantro, plus lime juice, reflecting a Dominican-style pork dish.

Regional Indian cuisine, and modernized versions thereof, are growing in popularity as chefs from the Subcontinent dig deeper into the food of the region, leading AF&Co. to call it the “cuisine on the rise.” Pictured is the Gurda Kapoora of Dhamaka in New York City, where chef Chintan Pandya braises goat testicles and kidneys in a mixture of red chiles, turmeric and ginger-garlic paste and then serves it in the bowl it’s cooked in accompanied by pao, a Portuguese-influenced soft buttered roll.

Nashville is the “food city of the year” according to AF&Co. Already the country’s bachelorette party capital, a series of new restaurant openings by big-name chefs including Jean-Georges Vongerichten, Tony Mantuano and Sean Brock mean the city is poised for an extended culinary renaissance.

This hand pie from Latin America, with different interpretations from Argentina to Mexico, is spreading on menus across the country as appetizers, main courses and even dessert, such as the peach empanadas pictured here that were introduced at Taco Cabana earlier this year.

Singapore, the city-state on an island at the tip of the Malay Peninsula in Southeast Asia, has a distinctive cuisine that reflects the Chinese, Malay and Indian heritages of most of its citizens, and it is striking a chord with Americans, many of whom might have become acquainted with it when seeing the hit film Crazy Rich Asians, according to AF&Co. Pictured is the rice dish nasi lemak with fish cakes called otak otak at Sibeiho in Portland, Ore.

Food with history
Courtesy of Roux 40

“Questions about where our food comes from have gotten much more complex as chefs and artisan food producers of color have started to dig deep into very specific culinary traditions,” AF&Co reports, “bringing back ingredients and techniques that have been misappropriated or all-but disappeared.” Pictured are broiled oysters from Roux 40 a restaurant focusing on Black-heritage cuisine that is slated to open soon in Oakland, Calif.

Although fish is generally prized at its freshest, the Japanese have long aged oily fish to concentrate their flavors, similarly to the way beef is dry-aged in the West. This trend is catching on in the United States. Pictured is dry-aged Jack fish in seared enoki mushrooms from Le Fantastique in San Francisco.

Perhaps as a counter-balance to the contactless service of the pandemic, some restaurants are kicking up their tableside service, such as the flambéed Baked Alaska at The Vault Steakhouse in San Francisco.

Although the tradition of high tea dates back to the mid 1800s, according to AF&Co., the tradition is being revived, in part as a relatively easy way for restaurateurs to welcome guests between lunch and dinner. Pictured is chef-owner Hong Thaimee’s Thai-inspired service at Thaimee Love in New York City, featuring butterfly pea flower tea to go with dumplings and steamed coconut pudding.

The photogenic breakfast food of Taiwan is becoming increasingly popular in large coastal cities, especially those with large Taiwanese populations, where guests are drawn to items like crustless sandwiches and fan tuan, a sticky rice roll with items such as soy-braised eggs and pork floss wrapped in nori seaweed.

These dumplings, made with uncooked dough usually stuffed with pork and scallions and then pan-fried, are spreading in popularity, according to AF&Co., which says they’re the next xiao long bao, or soup dumplings. Pictured is sheng jian bao from Dough Zone, with locations in California, Oregon and Washington.

This Uruguayan sandwich is typically made of thinly sliced beef, mozzarella, tomatoes, mayonnaise and olives, among other items (often an egg, ham and bacon). Pictured here, from Ampersandwich, a virtual concept in Washington, D.C., the sandwich has beef, Virginia ham, bacon, egg roasted peppers, chimichurri, aïoli and melted mozzarella on a grilled sesame seed bun.

AF&Co reports that a growing number of restaurants are sourcing their own sturgeon and curing the eggs themselves, such as at Alley & Vine in Alameda, Calif., whose service is pictured here

Also sometimes known as screwpine, pandan is used in much of Southeast Asia as a subtle aromatic added to drinks and desserts. In Thailand, bite-sized pieces of chicken are wrapped in pandan, fried and served as an appetizer known as gai hoh bai toei, and it is increasingly being used on menus in the United States. Pictured, the author is enjoying the fragrance of a pandan leaf in Malaysia.

Beverage lists with a point of view
Wachira Wines

A growing number of restaurants are working to amplify voices that are less frequently heard from, such as minority- and women-owned beverage companies. More lists are being put together highlighting these producers, such as that of Karibu Wine Lounge by Wachira, which features the bottlings of Black-women-owned winery Wachira.

Third-Wave coffee is the term attributed to purveyors of specialty brews that went a step beyond large operators such as Starbucks (which were the second wave). Now other coffee cultures are being highlighted, such as Ethiopian and Vietnamese or, pictured here, the cold foam that started in Taiwan, was later picked up by Starbucks and now is even available at more mass-market chains such as Dunkin

The tapioca pearls are here to stay, as can be seen by the fact that they’re now available in drinks at large chains such Del Taco, pictured, where they’re called “poppers.”

Dubbed “the smoothie in the cuzzi” trend by AF&Co, beers with more texture, with fruit purées added after the first fermentation, are an offshoot of the sour beer trend. Pictured is the PB&J Slushy beer from 450 North Brewing Company in Columbus, Ind., made with blackberry, banana, grape, peanut butter and marshmallow.

Once predominantly flavored with juniper, gin now comes in flavors that reflect where they’re distilled, like this gin from Vietnam that is made with green turmeric, pepper, black cardamom, pomelo and white licorice root.

This Bolivian grape spirit is sometimes seen as a cousin of pisco, but it tastes more like grappa and is becoming increasingly widespread at trendy bars.

Beverages made with cannabis are becoming more widespread, even if the psychotropic effect is minimal, such as this Wonder Water by 8th Wonder Brewery in Houston. It is made with Delta-8 THC, rather than Delta-9 THC which is the substance people use to get high, and is currently legal in Texas.

Some cannabis advocates see THC beverages as the wave of the future, with some even looking to rework the term “mocktail” to mean “marijuana cocktail.”

Wines made with Pinot Noir, but without any skin contact, are starting to pop up more, such as this Waits-Mast Anderson Valley Pinot Noir Blanc. If that seems a little odd, remember that Champagne is typically made with a blend of Chardonnay and Pinot Noir grapes.

Pistachio milk is a trending dairy alternative that AF&Co praises for its attractive color. 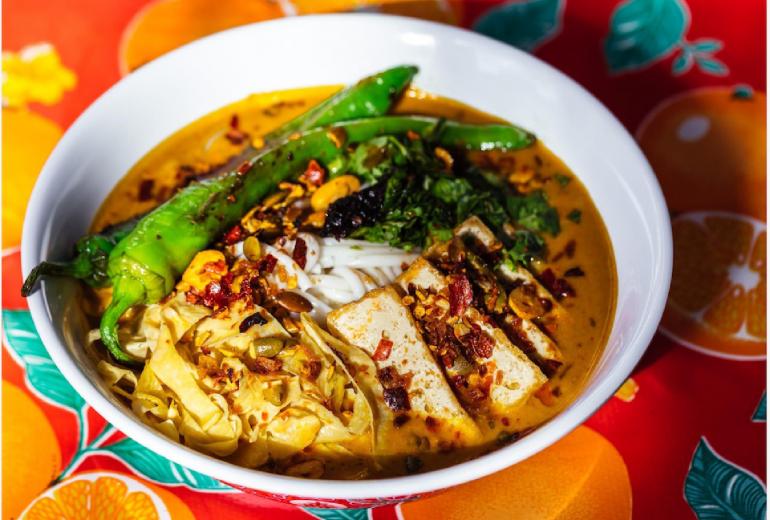 Next Up
New on the Menu: Beer can Cubano and rice-stuffed mussels
Start Slideshow ›