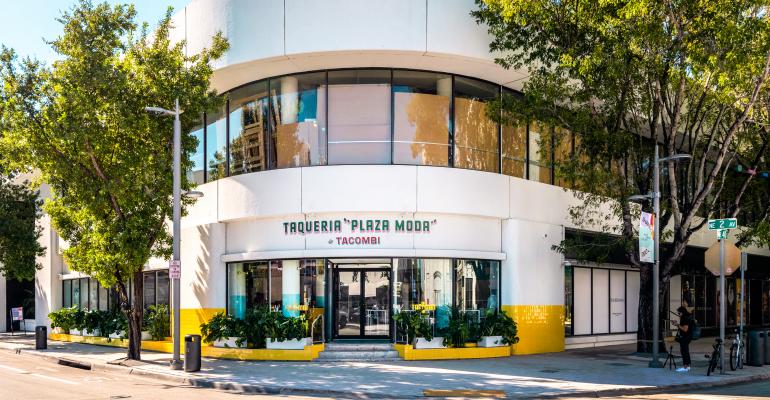 Tacombi to grow across U.S. with $27.5M funding round led by Danny Meyer’s Enlightened Hospitality Investments

Enlightened Hospitality Investments, or EHI — which has a growing portfolio that includes Dig, Salt & Straw and Joe Coffee Company — is joined in the Tacombi funding round by Mexican firms Capital Mazapil and Rodina, a private investment firm and family office led by Andres and Felipe Chico; as well as Gary Hirshberg, co-founder and former CEO of organic yogurt maker Stonyfield Farm. Hirshberg will join Tacombi’s board.

Dario Wolos, who was born in New York but spent much of his life in Monterrey, Mexico, launched Tacombi in 2006 on the Yucatan peninsula in the beach town of Playa del Carmen. Initially, it was a taco stand out of a converted Volkswagen bus — known in Mexico as a “combi.”

“I had no idea what I was doing and it really began as a fun adventure,” said Wolos in an interview.

Tacombi’s menu developed to offer regional flavors from across Mexico, which he said was “reminiscent of the road trips I would take with my family when we would drive all over Mexico. We had people visiting from the U.S., Canada and Europe at Playa del Carmen. It was laying out the architecture for what this brand could become.”

After opening two there, the concept took a hit when swine flu largely shut down tourism to the area. But Wolos had planned to bring an authentically Mexican concept to the U.S. since he was a student at Cornell University, so he put the VW combi on a boat to Miami and trucked it to New York City in 2010, and the brand was launched in the U.S.

Wolos’ mission was “sharing Mexican culture through exceptional hospitality and experiences.” The restaurants offer a focused menu of tacos and burritos, with beer and some cocktails, though Wolos said the bar is not the focus. The concept does about half its sales as takeout or delivery, he said.

Tacombi now has 11 locations in New York and units have opened in the Washington, D.C. area and Miami within the past few weeks.

With the investment, the taqueria plans to grow to reach at least 75 locations across the U.S. with multiple formats over the next five years. In 2022, three more are planned for both the D.C. and Miami markets, and Wolos said leases have been signed for new units on Long Island and in Chicago.

The company is also considering licensing partnerships to grow overseas, said Wolos, particularly in markets where Shake Shack — which was founded by Meyer and later spun off as a public company — also operates, including the Middle East, China and Japan.

In addition, Tacombi plans to build on a consumer-packaged goods brand it developed called Vista Hermosa, which was created when the restaurants couldn’t find tortillas that met their standards, so they started making their own.

Out of a production plant in New Jersey, the Vista Hermosa brand now includes corn and flour tortillas and tortilla chips (“Topotos”) that are sold in 800 retail stores, including Whole Foods Markets in some regions, Bristol Farms and online. The company next year plans to add frozen burritos, and Tacombi also sells a proprietary line of juices and sodas under the Lupita brand.

“I really believe what we do is a perspective on Mexico that a lot of people will love across the U.S.,” said Wolos. “Our focus is really to improve the people and supply chain systems as we grow. That’s the highest priority, to make sure the quality remains and improves.”

Meyer, who is co-founder of EHI and chair and CEO of Union Square Hospitality Group, said Wolos’ mission of sharing Mexican hospitality with a broader American audience was a good fit for the investment fund.

“Tacombi is building an incredibly dynamic business, solidly positioned for growth both with its bustling taquerias and exceptional line of quality packaged goods,” Meyer said in a statement.

The taqueria also supports The Tacombi Foundation, with fights food insecurity in the markets where restaurants operate, with a Tacombi Community Kitchen program to prepare wholesome meals to those in need, which began during the pandemic and has continued.

Tacombi was advised on the funding round by Kirkland & Ellis LLP.

CORRECTION: An earlier version of this story incorrectly indicated the frozen burrito line had launched. It's scheduled for 2022. Also The Tacombi Foundation fights food insecurity in communities where the company operates, not in Mexico.