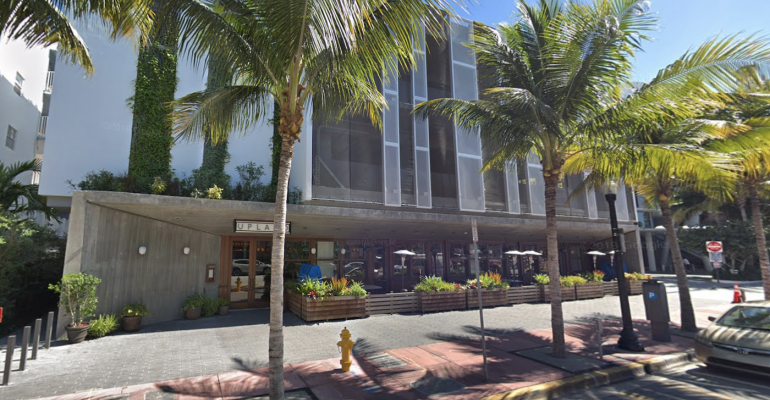 Collins Ave. location has been closed since March pandemic shutdown; other restaurants unaffected

Upland, a Stephen Starr restaurant in Miami, filed Monday for Chapter 11 bankruptcy protection because of the coronavirus pandemic and will permanently close after four years, the company said in court filings.

S Lot Partners LLC, an entity of the Philadelphia-based Starr Restaurant Organization LP, filed the Chapter 11 petition in the U.S. Bankruptcy Court for the District of Delaware. The Upland in New York City remained open for takeout, outdoor dining and delivery.

“As a result of the COVID-19 pandemic and certain governmental shut-down orders, the restaurant closed for business in March of this year,” lawyers for S Lot said in bankruptcy filings.

“While the debtor had hoped to reopen the restaurant as soon as possible, the realities of the pandemic’s effect did not permit that to occur,” wrote S Lot’s lawyer, Stuart Brown, an attorney with DLA Piper LLP.

Upland opened in February 2015 in Miami and was known for its California-inspired seasonal philosophy.

In seeking to reject its lease on the 9,300-square-foot restaurant, S Lot said it was paying about $85,000 for use of the premises while closed.

“Under the lease, the debtor is required to pay monthly base rent of $68,295.44, plus monthly payments for property taxes, insurance and Florida sales tax,” the lawyer argued.

Starr told the Philadelphia Business Journal on Tuesday that the Upland Miami bankruptcy filing is expected to be “a unique, one off situation.”

“The realities of the impact of the pandemic and the gamble on the unknowns of when life will resume left this specific operating entity with little choice,” Starr said. “The economic terms and continued constraints on the business made continued operations at this location very difficult to weather the storm.”

The Starr Restaurant Organization owns and operates 38 restaurants in Philadelphia, New York, New Jersey, the District of Columbia and Paris, France. Among its noted restaurants are Buddakan, Continental, El Vez and Parc.