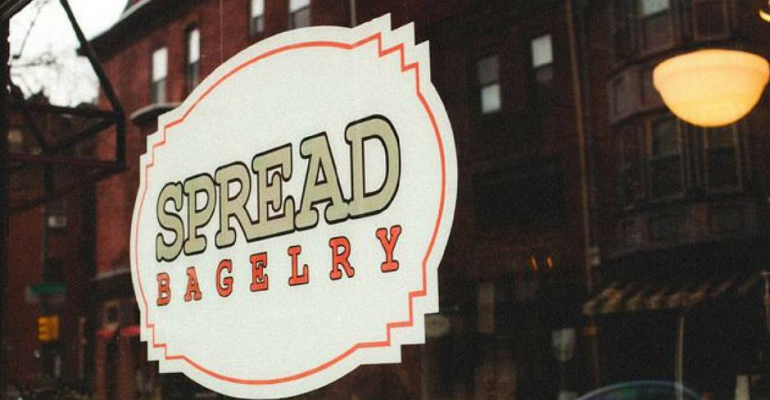 Spread Bagelry to expand beyond Philadelphia with private-equity investment

The Radnor, Pa.-based private-equity firm has made an undisclosed investment in eight-year-old Spread Bagelry, known for its Montreal-style bagels baked in a 20-ton wood-fired brick oven. The capital will support the company as it beefs up leadership and expands beyond its two Philadelphia locations, the company announced Tuesday.

CEO Larry Rosenblum said he plans to add about 25 company-operated locations over the next few years. The company does not plan to franchise.

More immediately, an e-commerce site for nationwide delivery is slated to launch by the end of the year.

The online storefront will ship bagels, as well the brand’s signature spreads.

“That’s one of our first priorities to build our online business,” Rosenblum said.

The logistics of shipping have not been worked out, including whether the bagels will be shipped flash frozen. However, Rosenblum, a former magazine publisher, said the company “will develop a new process to ship in a way that has longer shelf life” for the bagels.

Rosenblum and his wife Gigi Arnuti opened the first Spread in 2010 in Philadelphia’s upscale Rittenhouse Square neighborhood.  Lines soon snaked out the door as fans clamored for the non-traditional bagels, which are hand-rolled, boiled in honey water then baked in small batches in a wood-fired brick oven designed specifically for baking bagels.

Rosenblum said the baking process is inspired by old-school bagel making in Montreal, where the oven is “the temple of the product” and “an authentic piece of art.”

The spreads are scratch-made using seasonal, local and organic ingredients when possible. The bagels cost $2 each, or $18 for a dozen. Breakfast and lunch sandwiches range in price from $7 to $12.

While some might call Spread’s bagels unconventional, Rosenblum would beg to differ. He said the Montreal style is “actually the way bagels were made in Eastern Europe.”

“The bagels are little sweeter in the dough, because there’s malt in the dough, and no salt. They are boiled in honey water. And more heavily seeded. That kind of defines the Montreal style,” he said.

Spread sells traditional flavors: plain, everything, poppy, rye, garlic, onion and sesame. Sandwiches are made with brisket and pastrami, which are also cooked in the wood-fired oven.

Rosenblum said many of his best customers are New Yorkers who take dozens of bagels back to Brooklyn, a haven for some of the best-known bagels in the Big Apple. He considers that a great compliment, akin to a Philadelphia native bringing home cheesesteaks from New York.

Asked if he would he consider opening a bagel shop in New York, Rosenblum said: “I would dare to go anywhere.”

Rob Brown, vice president of MVP Capital Partners, said he’s been a fan of Spread for years. MVP plans to scale the business by working with Rosenblum, who will remain CEO.

Brown said the demand for Spread’s quality bagels is “enormous but, in so many locations, underserved.”

Rosenblum said he’s scouting diverse neighborhoods with eclectic food on the East and West coasts for his first round of expansions.

“l know wherever we open, we will be a special place with a unique product, a unique atmosphere, environment and experience that people will love,” he said.