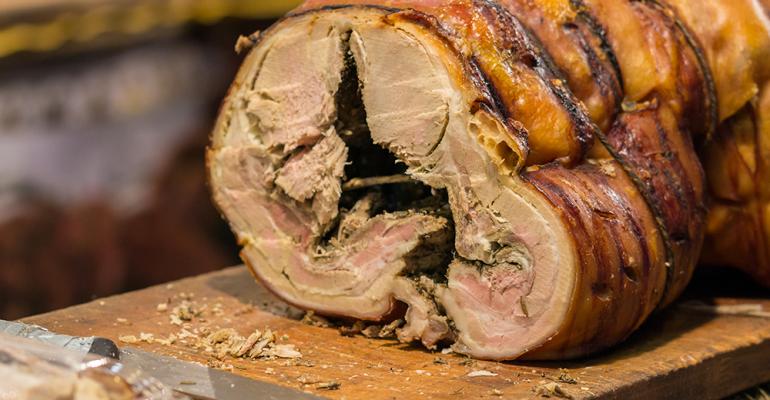 In culinary terms, the pig is truly the gift that keeps on giving.

The nose-to-tail, whole-animal movement that picked up steam during the recession took a waste-not/want-not approach to hog butchery by using all parts of the animal. And, let’s face it, there are lots of pig parts to use.

Many had previously been discarded, like the pigs’ ears that crunch up the salad at The Publican in Chicago, the whole pig head on offer at The Greenhouse Tavern in Cleveland and the pork trotters, or pig feet, that have been featured at Frances in San Francisco. Chicharrón, or fried pork skin, is in, bellies abound, and lard has regained its rightful place in many kitchens.

But of all the porcine pleasures, arguably none surpasses Italy’s porchetta for sheer hog heavenliness.

A succulent roast pork that is traditionally made from a whole suckling pig, porchetta is no stranger to higher-end Italian restaurants in this country, like New York’s Il Corso, where the Porchetta alla Romana is stuffed with garlic, fresh herbs and wild fennel, then plated with potato purée. What’s noteworthy, however, is the extent to which it has made its way across the food chain, turning up at casual places of all stripes and in all locations. Paired with crusty bread, it has become a sandwich filler that would be right at home on the streets of Rome. Gjusta, a bakery-deli-cafe in Los Angeles, makes a Porchetta Melt with rapini, onion and fontina cheese, while Publican Quality Meats in Chicago offers a weekend brunch special in which the porchetta is served on ciabatta with aioli, whole-grain mustard and pickles. By contrast, Barzotto, an American pasta bar in San Francisco, puts it on a charcuterie board with cherry mostarda and in a pasta special with kale, ricotta and Aleppo chile. At Atlanta’s Star Provisions, it stars in the Slow Roasted Porchetta Bowl with pan jus, braised kale and a soft-poached egg.

Lardo, a pork-centric sandwich shop that started life as a food cart in Portland, Ore., dresses up its porchetta sandwich with gremolata, caper mayo, Parmesan and arugula. Speaking of carts, The People’s Pig was another early entry in the Portland, Ore., food-cart scene that has also expanded without losing focus on its eponymous swinish specialties. It dishes up porchetta made with garlic, fennel pollen, arugula and lemon in a sandwich or on a platter.

The aptly named Porchetta Truck in Durham, N.C., lives up to the title with five porchetta sandwiches including The Italian Cuban with housemade pickles and giardiniera and The Red-Headed Stepchild with hot peppers, pickled red onions and roasted red pepper cream. RoliRoti, which rolls out sustainable, slow-cooked street food on the streets of San Francisco, starts with heritage-breed hogs, slow roasts the pork loin on the rotisserie for four hours until the skin is crackling, and then makes a porchetta sandwich with onion marmalade.

In a sure sign of mainstream acceptance, porchetta has been popping up on limited-service-chain menus, too. Arby’s, a real haven for carnivores, proved once again that it has the meats with last year’s Porchetta Sandwich promotion that consisted of a pork loin wrapped in skin-on pork belly and smoked for eight hours. The result was thinly sliced and put on a toasted sub roll with melted provolone, banana peppers, red wine vinaigrette and garlic aioli.

Columbus, Ohio-based Piada serves Italian street food in its 37-units and offered a Porchetta Sandwich special in the fall that was finished with basil aioli and served with a side of rosemary-Parmesan chips. And Dog Haus, a hot-dog-oriented operation with 25 units headquartered in Pasadena, Calif., kicked off 2018 with a collaborative chef series. First up was chef Bruce Kalman of Union in Pasadena, whose Porchetta ‘Bout It topped a custom porchetta sausage with giardiniera, garlic aioli and, in a piggishly multicultural finish, chicharrón.

Nancy Kruse, President of the Kruse Company, is a menu trends analyst based in Atlanta. As one of LinkedIn’s Top 100 Influencers in the US, she blogs regularly on food-related subjects on the LinkedIn website.