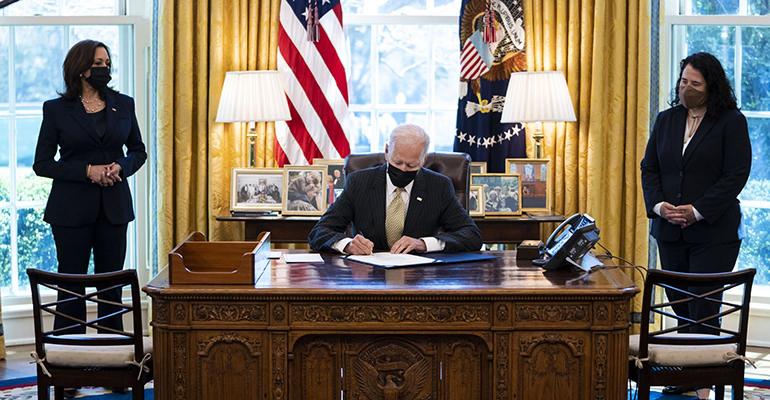 Pool / Pool /Getty Images News
President Biden originally extended the third round of the PPP to May 31.
Operations>Finance

The third round of the U.S. Small Business Administration’s PPP ended Friday, three days ahead of the scheduled closure of May 31

On Tuesday, the U.S. Small Business Administration officially announced that the third round of the Paycheck Protection Program had closed to new applicants on Friday, May 28, three days ahead of its scheduled expiration date, after funds ran out.

The SBA announced that thus far, the emergency loan program had provided $798 billion to 8.5 million small businesses since its inception last March. The third round of PPP was approved to distribute $284 billion in loans when it opened in January.

Related: The PPP Extension Act of 2021 extends loan applications through May 31

The broader Paycheck Protection Program’s funds were exhausted by May 6, but community financial institutions were able to continue distributing $8 billion of loans, mainly to businesses owned by women, minorities and other underserved groups.

“The Paycheck Protection Program provided over 8.5 million small businesses and nonprofits the lifeline they needed to survive during a once-in-generation economic crisis,” SBA administrator Isabella Casillas Guzman said in a statement.

While the program was criticized in the first round of PPP last spring for approving and prioritizing larger companies (many of which, like Shake Shack, Ruth’s Chris, and Sweetgreen, returned their approved PPP loans), by the third Paycheck Protection Program round in 2021, 96% of PPP loans had gone to small businesses with fewer than 20 employees and nearly one-third of loans were distributed to businesses in low- and moderate-income communities.

Small community lenders provided 1.5 million loans totaling $30 billion, indicating that by the third round, the SBA had figured out how to prioritize the smallest businesses. The average PPP loan also dwindled by nearly one-third from $113,000 in the first round to $42,000 in the third round.

“I’ve heard story after story from small business owners across the country about how PPP funds helped them keep the lights on, pay their employees and gave them hope,” Guzman continued. “At the same time, millions of underserved businesses — particularly our smallest businesses and those owned by women and people of color — were left out of early rounds of relief. I’m proud of the work we did to begin to rectify these inequities.”

Guzman stated that after what they learned from administering the three rounds of PPP loans, the SBA will continue to prioritize equity in their programs and services moving forward.

The Restaurant Revitalization Fund — aimed at specifically helping independent restaurants and small chains — already closed on May 24 after the SBA received more requests for funds than were available.

There is no update on if or when another round of loans or grants would be available for small businesses.

In the digital era, gift cards are more critical than ever for restaurants
Dec 06, 2022