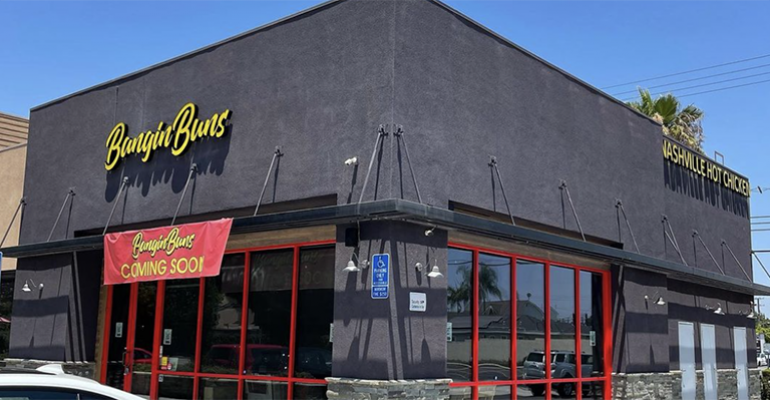 The third unit of Bangin' Buns opened in the Los Angeles suburb of Artesia this week.
Operations>Finance

Los Angeles-based Ike’s Love & Sandwiches has made its first strategic investment in an emerging hot chicken chain with big plans for growth.

The 80-unit sandwich chain has invested in Bangin’ Buns, a three-unit concept in the Los Angeles area that was launched in 2018 by four friends: Nick Nshanyan, Gary Shahbazyan, Sam Manvelyan and Arman Grigoryan.

Details of the investment were not disclosed.

The company plans to open 15 new units of the hot chicken brand by the end of 2022, and launch franchising in 2023.

Goldberg described Ike’s and Bangin’ Buns as equal partners. The plan is to move Bangin’ Buns into markets where Ike’s operates, including Northern and Southern California and Arizona.

“We want to grow the concept, get it on the map a bit more, get the revenues up and then really look at the franchise side, where I feel like there would be some experienced franchisees out there that would not only look at hot chicken, but Ike’s too,” said Goldberg.

Ike’s has been building its digital capabilities, including online ordering and a new app, and those tools can be applied to Bangin’ Buns as well, he said.

Operationally, Bangin’ Buns is a more simple operation than Ike’s, he said, but Bangin’ Buns units at 1,200- to 1,400-square-feet have more than double the average unit volume of Ike’s, which can range from 800- to 1,200-square feet.

The chicken is served as tenders with fries or slaw, or as a sandwich in a hoagie roll, rather than a bun. Guests can also choose a tender/bun combo.

The Nashville hot-style chicken is served at varying spice levels, from “country” (no spice) to “bangin’” to feel the heat, with three types of sauce for dipping.

Nshanyan, one of the four founders, said the average check is around $13. Diners can snack on a bowl of "pops," or nuggets, for as little as $5 or get a sandwich, fries and drink for $14.

"The difference between us and others out there is the type of quality we put into our food," said Nshanynan, in an interview after opening the third unit in Artesia this week.

After spending four or five months perfecting recipes, the group began offering hot chicken first out of their homes and developed a following. Within about six months, the first restaurant opened.

Manvelyan said the founders were inspired by the success of Howlin' Ray's hot chicken concept in Los Angeles' Chinatown, which pre-pandemic had lines every night.

Bangin’ Buns’ origin story is very similar to that of Dave’s Hot Chicken, which was also launched in a Los Angeles-area parking lot originally by a group of friends.

Dave’s Hot Chicken, which has been growing at a rapid clip, before the pandemic received a significant investment from the folks behind Blaze Pizza, including Wetzel’s Pretzel’s co-founder Bill Phelps, who serves as Dave’s Hot Chicken CEO.

“Dave’s is out there. There are other brands,” said Goldberg. “But I don’t feel there’s another brand out there currently that’s giving Dave’s a run for their money.”

Asked whether Ike’s would look for more investments or acquisitions, Goldberg said he has long hoped to get involved with another pizza brand. The former chief operating officer of Fresh Brothers Pizza, Goldberg said his noncompete agreement has ended.

“We might look for another like this with two-to-three units and a great growth path ahead,” he said.