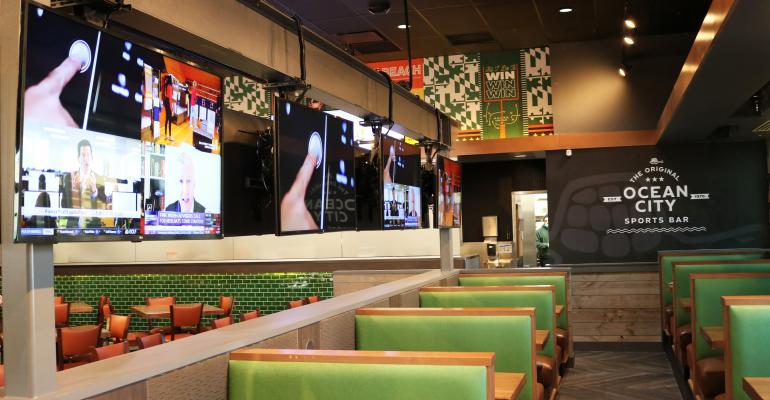 ITA Group Holdings
The newest Greene Turtle in Gambrills, Md., is the first company-owned unit to open in a decade.
Operations>Finance

How this portfolio company is growing new emerging restaurant concepts

Last week, the parent of the sports-restaurant Greene Turtle announced a recapitalization and reorganization to create what is now a new portfolio company under ITA Group Holdings LLC.

In an interview with Nation’s Restaurant News, Geo Concepcion, CEO of Greene Turtle, described the Columbia, Md.-based ITA as essentially having three legs:

The first is the recently revitalized Greene Turtle, a 46-year-old casual-dining brand with a sports theme and a signature crab dip that has relaunched growth. Acquired by private-equity firm Stone-Goff Partners in 2015, work on this brand has been in process since Concepcion was hired in 2019.

The second leg will be the single-unit Clark Crew BBQ in Oklahoma City, a restaurant developed by barbecue champion Travis Clark — known for his brisket, in particular. Acquired as part of the ITA restructuring, the restaurant does more than $8 million in annual sales in an 8,500-square-foot former location of Romano’s Macaroni Grill. There are no immediate plans to multiply that brand, Concepcion said, but the company sees opportunity to expand on existing operations.

The third leg of ITA is a division called Founders Growth Platform, or FGP, which has taken a 50% stake in seven emerging brands with the goal of sparking growth. ITA will provide a minimum of 50% of growth capital for each brand going forward.

With this three-legged stool structure, Concepcion said the new ITA is designed to be an “entrepreneur-first” company.

“The idea is that these entrepreneurs are helping everything in the portfolio. Each entrepreneur has a superpower and they contribute to the group,” he said.

“That’s part of what we’re trying to do here. We’re focusing on very early stage,” he added. “I think there’s two ways to think about having a holding company, and obviously there’s one benefit of having enormous scale and rolling things up. And the way we’re attacking this is to bring together entrepreneurs in the very early stages as we scale things up and have them all working and growing together with the idea that it’s going to be a lot easier to have the kids play nicely together, growing up together, [rather] than forcing that later on when they’re in their teens.”

For the FGP brands, Concepcion said the plan is to grow the concepts to between five and 10 units and prove the concepts out in three to four markets. At that point, the company would consider franchising.

Here’s a look at the seven brands under FGP and plans for growth at this point:

This four-unit concept based in Columbia, Md., offers artisanal pizza with a flexible quick-service model. Units have self-service “beer walls,” and counter ordering. The menu includes 10- or 14-inch pizzas, burgers, salads and sandwiches, as well as wings, pepperoni rolls and appetizers like Maryland crab dip, and cheese curds.

The first location under FGP opened in Owings Mills, Md., earlier this year, and the company has signed a lease for another in Towson, Md., Concepcion said.

This is a tapas and wine bar in Roswell, Ga., that was founded by Abelardo “Abe” Ruiz, a former chief operating officer of Famous Dave’s (preceding Concepcion, who also served as COO of Famous Dave’s). Ruiz also served later as CEO of Babalu Tapas & Tacos.

With Madrid, Concepcion said Ruiz wanted to design a concept that required no hoods, that could operate in a small footprint cost effectively, but offer a great experience. The first unit under FGP is scheduled to open in Columbia, Md., this summer, as soon as the alcohol permits are issued, Concepcion said. “And we are pursuing LOIs aggressively.”

At about 3,500-square-feet, the Columbia location will be limited service. The goal is to open two or three in the first year, and scale up growth after that.

Founded in 2016, this two-unit Maryland-based sandwich concept was founded by Kevin Curley, a Culinary Institute of America and Cornell alum that Concepcion describes as an innovative thinker and “great culinarian.”

The menu varies by location, but includes regional classics like a Maryland crabcake, a New York Italian Hero or a Philly Cheesesteak, but also dishes like a Kentucky Smashburger, a Jackfruit Cubano and limited-time offers, like a Maine Lobster Roll. Beer, wine and cocktails are self-serve, on tap.

“He wanted to create a higher-end Jimmy John’s and go after the sandwich category,” Concepcion said. “He’s fiercely competitive, but he really thinks about branding in an interesting way.”

FGP is finalizing the lease for the first RegionAle expected to open under the platform, which is expected in the fourth quarter, or first quarter next year, and the company is actively pursuing other sites in Maryland.

This full-service Mediterranean restaurant in Baltimore got its start years ago as a food cart offering popular pita sandwiches. The husband-and-wife team eventually opened their brick-and-mortar location, and later added a few locations of a café variation that didn’t survive lease renewal.

With FGP, Cypriana’s pita sandwich menu will be resurrected as a fast-casual concept, with the first under the platform scheduled to open in the fourth quarter in Owings Mills.

This Atlanta-based concept has five locations, and is a franchise concept. It was created with Ruiz, who also developed Madrid, and who worked with founder Reynaldo “Rey” Regalado Jr., a former Cuban refugee who named the concept for his father. On the menu is traditional Cuban food, including tostones, empanadas, ropa vieja and arroz con pollo.

“Meeting Rey and hearing his story, and seeing what he built with very little outside assistance, it was a story and a founder we felt very strongly about,” said Concepcion.

FGP plans to expand the concept both in Georgia and Maryland, with the first unit under the platform expected to open in 2023. Though currently a full-service concept, Concepcion said FGP plans to explore limited-service variations.

This chicken tenders-and-biscuits concept in Minneapolis opened as a brick-and-mortar briefly, but then closed following a dispute between the partners and pressures from the pandemic, said Concepcion.

“But during its brief first stint, it was highly regarded,” he said. “People loved it, they had long lines, and people were upset when it went away.”

After meeting with two of the original founders, FGP decided to bring the concept back, potentially in both Minneapolis and Maryland. The company is currently searching for sites.

Among the FGP concepts, CHX will be the first that will also be tested as a virtual brand out of the Greene Turtle kitchens, said Concepcion.

This is a brand that is being created under the FGP banner to fit a second-generation real estate location in Baltimore. None of the other concepts seemed right for the space, Concepcion said, so the company tapped Curley of RegionAle to create Fat Patties, a burger brand that intends to lean in to indulgence.

“The name will let everyone know this is not for summer bod consumption,” said Concepcion.

Scheduled to open in August, Fat Patties is a test. If well received, the company will look for growth opportunities.

Meanwhile, Concepcion has been working on the revitalization of the Greene Turtle brand.

The company developed a new prototype location that debuted first in 2020 as a franchise location. In January this year, the company opened its first new Greene Turtle in a decade.

That new company unit is in Gambrills, Md., using the new-prototype design in a 6,500-square-foot space, and Concepcion said it is the No. 1 performer.

The Gambrills location is the first in the system with space dedicated to to-go business, and the restaurant is also host to two virtual brands: Mr. Beast Burger and George Lopez Tacos.

Three more Greene Turtles are scheduled to open in 2022, he said, including a 3,500-square-foot unit near Nationals Park in Washington, D.C.