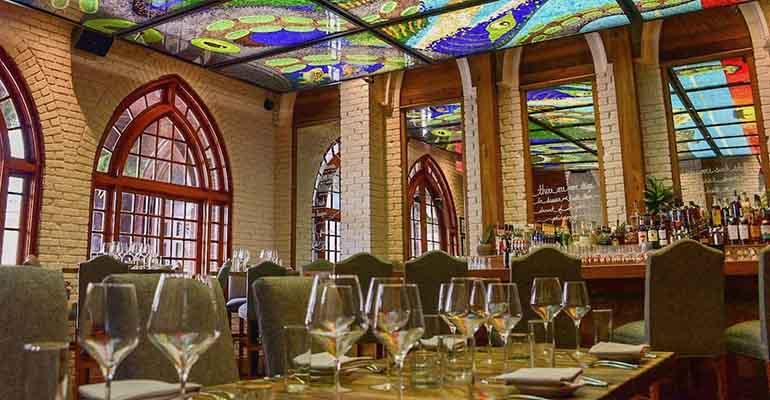 At 5th Street Group restaurants, guests can tip both the kitchen and servers

Multiconcept operator Patrick Whalen has opened three new restaurants over the past year. The group’s five restaurants are fully staffed, the work environment is more positive than ever and sales trends are outperforming pre-COVID levels.

“We’re open for all of our shifts and outperforming our pre-COVID numbers. We’re crushing it,” said Whalen, CEO of 5th Street Group, which operates restaurants in Charleston, S.C., Charlotte, N.C. and Nashville, with more to come.

How has Whalen avoided the labor woes hampering his peers? His not-so-secret sauce includes a bit of innovation with gratuities at his restaurants that he feels has been a game changer.

At 5th Street Group restaurants — with concepts that include 5Church, Church & Union, La Belle Helene and the upcoming Ophelia’s — guests have a line on the bill to tip their servers, as is typical.

But there’s another line on the bill allowing guests to tip the kitchen.

On the menu, the restaurants indicate the back-of-the-house workers who benefit from this second gratuity, including the line cooks and dishwashers who are not typically allowed to share in tips meant for servers.

Under this arrangement, Whalen says they can receive tips intended for the back of the house directly.

Under the program, which launched earlier this year, Whalen matches the tips given to the kitchen up to $500 per day at each location, further increasing hourly pay. He estimates kitchen tips have totaled about $600,000 since April, and about half of that came from the company match.

And, because the company has also increased the minimum wage to at least $15 per hour, Whalen estimates back-of-the-house workers earn $51.33 per day — or about $6.42 per hour — on top of that hourly rate, so they’re average pay is about $21.42 per hour.

To keep things balanced for the front of the house the company also offers a “backstop” wage to help support gratuities to servers. In the event that guests split the tip and give servers less, the company offers a supplement to bring server tips up to about 22%.

For Whalen, who has about 300-plus workers across five restaurants, the program has been “the difference maker. Period.”

Not only has it vastly improved his ability to recruit and retain workers, Whalen said the team is “far more positive,” and the kitchen staff doesn’t hate the front of the house.

“I didn’t do it to have a market advantage, but we have an enormous market advantage. We’re simply able to pay way more than anyone in the market is paying,” said Whalen.

And Whalen said he has not had to raise menu prices across the board. “That doesn’t work,” he said. Other restaurants have tried using surcharges or fees, but Whalen feels that’s the same as raising menu prices.

“It’s not my guests’ fault that there’s a staffing crisis per se. It’s not their fault that COVID happened. To assess huge fees on them, it’s basically levying the guest,” he said.

He estimates the Tip the Kitchen program has cost him an additional 3.5% of the company’s top line. But high turnover is also extremely costly.

“My guess is that of that 3.5%, about 2.5% to 3% are expenses I would have incurred anyway just to hire people, recruiting, training, turnover, mistakes from new staff — there are so many expenses that are built into turnover that people kind of forget about,” he said.

Fundamentally, the current labor crisis is a result of the inequities built into the traditional restaurant wage model, he argues.

Before this solution, for example, hourly kitchen workers were making one-third to a quarter of what front-of-the-house staff made with tips, and Whalen said.

“You just can’t have an environment where you’re trying to promote teamwork — our company motto is ‘there is only we’— and it’s very hard to say you’re prioritizing ‘we’ as a group when one department is so clearly being devalued,” said Whalen.

5th Street Group operates two locations of 5Church, in Charleston and Charlotte. The group is no longer associated with a 5Church in Atlanta and Whalen has been in litigation for years with a former business partner over that brand.

Whalen opened Church & Union, which he describes as a cousin of the 5Church brand, in Nashville earlier this month, offering new American cuisine in a “stunning” design. The small plates lounge Ophelia’s is coming to Nashville soon, and the company is looking to bring the Church & Union brand to more cities, including potentially Denver, Atlanta and Scottsdale, Ariz.

The company’s wage model will be applied to all locations.

“I want people to view this industry as a viable career,” said Whalen. “I started as a dishwasher and I have done exceedingly well for myself, but I went through a lot of garbage to get there.”

The model can change, he said, “and we have to start by giving people a living wage and that’s what this is about. It has made hiring easier. It has made retention easier. And, frankly, it has made the environment in the restaurants so, so, so much better. Like remarkably better.”