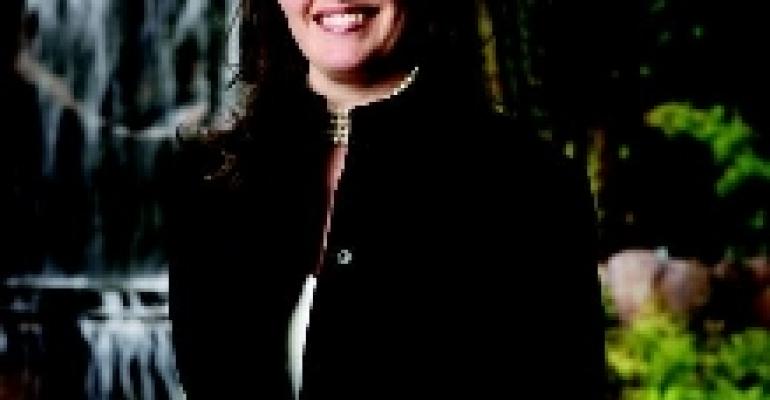 Blau As In Wow

To begin to appreciate Elizabeth Blau's impact on the madcap world of Las Vegas food and beverage, it's best to scroll back to October 1998 when Bellagio opened. Now, stroll down restaurant row there to marvel at Olives, Le Cirque and Aqua, one right after the other, each a replication not far removed in menu and design from the original.

At the time, Blau was senior v.p., restaurant development, Mirage Resorts (Bellagio's parent) and had been working since early 1997 with then-Mirage chairman, Steve Wynn, to figure out what kinds of celebrity-styled restaurants would suit Bellagio's upscale aura. Remarkably, Blau succeeded in convincing some of the most respected names in the business (Sirio Maccioni, Todd English, Jean-George Vongerichten, Michael Mina) to strut their iconic celebrity at this new, lavish, trend-setting hotel.

With Bellagio booming and the restaurants thriving, the hotel/casino food and beverage landscape in Vegas changed dramatically. It suddenly emerged as the improbable antithesis to what was in place ad infinitum before: the dim-witted all-youcaneat-steam-tabled buffet.

Foodservice in Vegas before Blau (BB) was not much to crow about. Now AB, plenty. For not only had Blau at Bellagio managed to overhaul spectacularly the image of hotel food and beverage in Vegas, she had sent a signal, however subliminal, to all Las Vegas hotels, that should they wish to compete for guest finedining dollars, they'd be smart to follow Blau's lead.

Mindful of that, Steve Wynn, who had peddled the Mirage package to Kirk Kerkorian in 2000 for a reputed $6.4 billion buyout, head-hunted Blau (who had, since the buyout, opened her own consulting firm). Once again she would mastermind the moves that would bring to his $2.7 billion resort/casino—Wynn Las Vegas—a collection of restaurants, but cast unlike anything else in Vegas.

Wynn Las Vegas was going to be different: diamonds, not cubic zirconia; restaurants that would be culinarily relevant because the chef who owns the place would be there all the time cooking, expediting, touching tables. The restaurants at Wynn Las Vegas would dazzle and dance because they would be originals, not a copy of a prototype or a flagship. Nine of the 19 food and beverage outlets would be chef-driven. And they are.

Elizabeth, take some credit for what you've done here.
Some, yes. All, I don't think so. The staff I worked with at Bellagio and now at Wynn Las Vegas deserves as much. Furthermore, give credit to Wolfgang Puck. I would not have even attempted the idea—would not have had the conversation with [Le Cirque's] Sirio Maccioni about coming here had it not been for Puck. However, there is no doubt that what we did at Bellagio set the stage for imitation at other hotels.

In Vegas or all over?
What happened here has had implications throughout the hotel industry in this country and around the world: Hyatt, Marriott, Sofitel, Four Seasons, Ritz-Carlton—all are leasing space to celebrity chefs and their branded concepts. It's also interesting to note that this idea has transcended hotels and has affected developers of all stripes. For example, shopping mall developers can position restaurants as anchors. Doesn't necessarily have to be a department store.

You've been called "a restaurant industry maverick." Acceptable description of Elizabeth Blau?
It's very easy to be a maverick when you have mentors like Cornell's Tom Kelly, Steve Wynn and Sirio Maccioni, who are bold, strong, always at the forefront of the industry. You learn from them.

So, with all this experience, you felt confident enough to open your consulting firm, Elizabeth Blau & Associates. How's that going?
I've taken a leave from the company to focus full time for Steve [Wynn] in Vegas, Macao, and Encore, the new hotel/expansion that's going up next door.

Who's minding the store?
My husband, Kim Canteenwalla. He's been running the business for two years developing everything from mixed-use projects in the Caribbean to Indian casino resorts in Canada.

To many in our industry, consulting is inscrutable, tough to figure out. Instead of clinically breaking it down, tell me philosophically what you think it is.
It's about passion—that's what drives me, that's what drives our associates. It's about refusing to compromise. Creative energy flows on a daily basis. Our company has one mission statement and that is: whatever we create, it must be an extraordinary entity. We strive for perfection and that transcends to any level whether you're doing a restaurant that serves hamburgers and fries or fine-dining.

Do you consider yourself an expert?
I'm always learning. Sometimes you think you may be an expert and then you spend an afternoon with Mitchell Davis [director of publications, James Beard Foundation] and you realize with a lot of humility how much you don't know. I've said that I wish I had a greater knowledge of wines. I love wines, but, there again, you sit down with a master sommelier and you realize how little of an expert you are. The great thing to remember about this business is that there is so much mental challenge and growth. So much to learn.

Let's say Elizabeth Blau is going to open a restaurant: what kind of restaurant will it be?
It would probably be a restaurant in Nantucket open only for breakfast and lunch and it would definitely serve fried clams. If that happens, it'll be a long time in the future when I'm ready to settle in one place. It's not a driving ambition.

We have little doubt it would be a great restaurant.
Yes, fried clams.